The Illyrian Players in Association with Watts Village Theatre Company’s “Hot ‘N’ Throbbing” Shocks Us All with Surprise Ending! 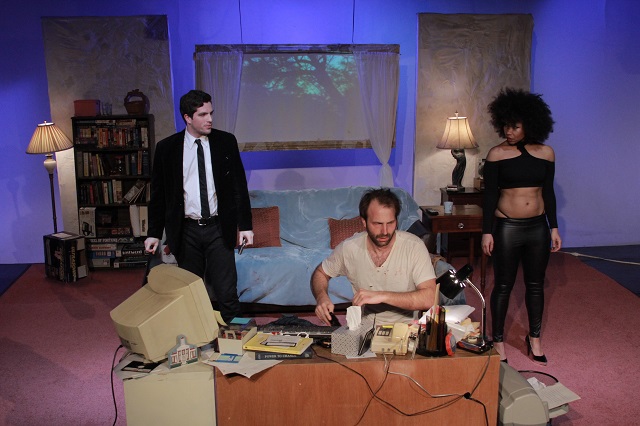 Set in a colorful, but modest, yet lived-in apartment, Charlene Dwyer, a middle-aged mother of two, sits toiling over an antique computer banging out her tales which seem to center around well…a more bawdy form of banging if you will… 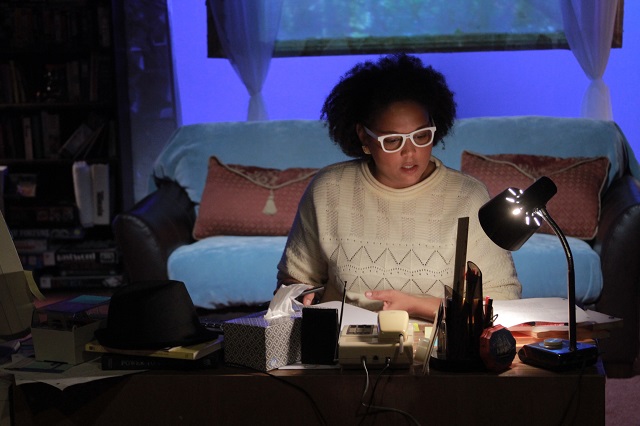 A sultry voice emanates stage left from a fittingly slinky female character dubbed “Voice Over”, her monologue echoing every one of Charlene’s keystrokes (and probably every other sorta *stroke* one can imagine beyond that). Cooing chiefly sensually provoked catch phrases one assumes this real time reenactment mirrors Charlene’s writing, (either that or there is a really sexy lady in Charlene’s apartment to whom she is not being the least bit cordial, or one of us is going crazy…) Nay, but in all seriousness Voice Over’s string of sultry utterances seems to be our writer’s muse in complete and utter counterpoint to that of Charlene’s bickering teenage children in the form of the comely  and precocious Leslie Ann “Layla” and the bespectacled, filially adorable and adored, yet sisterly despised mama’s boy Calvin. Aside from the children’s animosity towards one another, Charlene’s distraction is not aided by Layla’s (her preferred and grown up name) objection to her new writing role, tempered by the separation from her beloved father, in the world of feminist pornography.

Calvin is more or less supportive of Charlene’s career and even assists in her articulation of ribaldly refreshing lingo in the ways of “love”. As far as his sister is concerned, however, he deems her a slut and weaves tales of an alleged stripping career on weekends.  Layla on the other hand dubs him a chronic masturbator “I can feel the whole house shake,” she asserts of his so-called self abuse.  Lovely huh?

Charlene is herself suspicious of the Layla’s latest gal pal and just wishes her son would get out of the house to leave room for Layla to stay in. 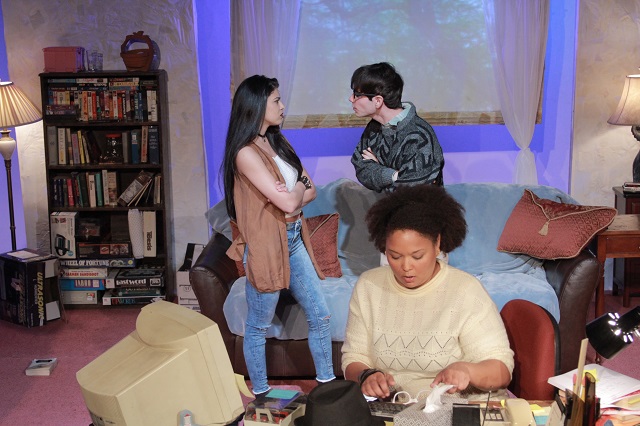 But perhaps, and as we will observe towards the end, none of the three characters have a completely accurate, or at the very least exaggerated, picture of one another’s perceived prurience incumbent upon their own insecurities, hurts and fears.

Enter the estranged father/husband, but not before The Voice—the male version of Voice Over—to sling additional literary lust driven lingo in conjunction with simulating titillating sexual trysts with none other than Voice Over (lucky girl) and well…narrating stuff like Jack Nicholson as if from a film noir thriller the likes of which the play slowly transmogrifies itself at the entrance of the estranged father.

So, enter Clyde: the estranged father. He is hirsute, he is shitfaced. He has cut the phone line, to speak nothing of breaking and entering by dismantling the door knob. Moreover, he has just violated Charlene’s restraining order to boot!

And this is where things get CRAZY!!! Clyde and Charlene go at it like a most twisted, low-income version of Tom and Helen Willis minus any irascible-to-good neighbors the likes of George and Weezie to keep them in check! Charlene, so rattled, frustrated and fed up by this turn of events, resolves to teach Clyde a lesson for good and does something completely illegal. Clyde, shocked but in the face of all his badassery (and for those who have seen the play, pun intended) is incredulous but still refuses to leave. In a volley of frustration, desperation, bewilderment and affection, he pleads not to be sent away point/counterpoint to Charlene’s similar reactions incumbent upon Clyde’s manipulations and implorations. There is something he needs from Charlene even he doesn’t completely seem to understand.  During the course of all this, Layla arrives home briefly. It is evident, via her mother’s truth-sheltering and her father’s coddling, she sees him through completely incongruous eyes than the rest of the immediate family as she begs to stay but to no avail. (She will later admit something rather disturbing to her best friend regarding her own sexual fantasies which indicate that perhaps her father’s presence has, in fact, warped her quite a notable way.) This contrast is particularly evident in Calvin’s violent reaction upon his brief reemergence for the night and the father/son tussle undertaken in its wake. 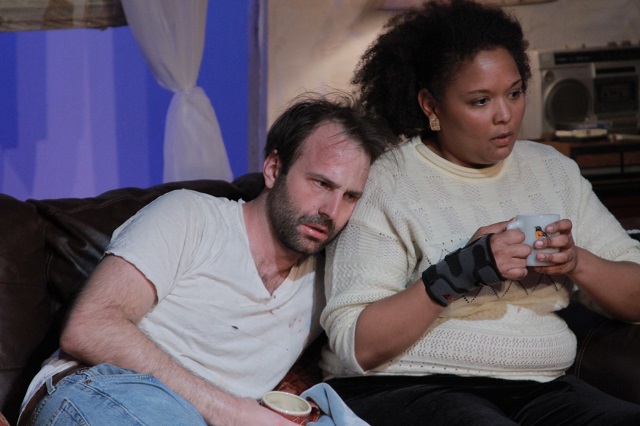 Clyde works up to informing Charlene that he no longer gets that turned on by sex and it’s NOT for the reason you think. At the script’s end, it is Clyde who then does the outrageous and based on certain characters’ reactions, perhaps no one ever was really exactly who we thought they were!—And my God, just see the play to find out what the heck happened!

All in all, a harrowing and psycho sexual thriller you never saw coming. And as highlighted in the director’s further fascinating program notes:

“Paula Vogel’s work is uncomfortable and challenging because she deals in the gray. The seemingly black and white situations that we find so easy to label from the distanced perspective of intellectual feminism often become muddied in the humanity of real life.  Vogel writes those real people in the mud, without condemning any of them – that’s up to the audience.”

“In 1989 Senator Jesse Helms created (and Congress passed) an amendment that required all artists seeking NEA grants to sign a statement promising not to produce ‘obscene’ art with public funding. Eager to test this censorship, Vogel applied for a grant, and wrote Hot ‘N’ Throbbing – because, as Vogel writes in the play’s dedication, ‘Obscenity begins at home.’ What is truly obscene, and what are we taught to view as obscene? Why are consensual sexuality and non-consensual violence pushed into the same category? Without easy judgments, Vogel explores the effects of keeping the ‘obscene’ in the dark, un-discussed and off our stages.” 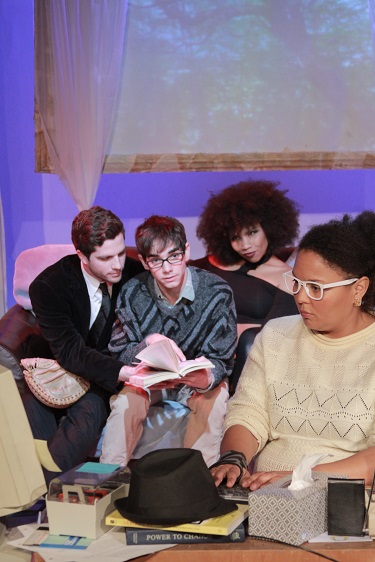 At first I’ll admit, I was a little skeptical of divining all too much enlightenment from this play based on the title alone, but figured there was something ironic in its bestial nomenclature and that it just might be as thought provoking beyond what I might imagine. Turns out, I was right. At certain points the script itself felt a little too slow and redundant after Clyde’s arrival, in particular, but all in all, and considering its ending and textural elements inherent therein, watching it ‘til the end truly paid off!

The production itself is just top notch! Robyn Gabrielle Lee as Charlene is sympathetic and appropriately overwrought in the most earnest of fashions. My-Ishia Carson Brown as Voice Over is too hot for TV, which is probably why she is onstage but what a stage presence it is, from her sultry pole dancing postures, to any and all randy riffing, to transforming herself into Layla’s teenage friend, she possesses the exact background to foreground characterizations this play requires. Nikki Mejia as Layla is not only stunningly seditious but also soft and multifaceted when one registers just what her character is to become. Jason Caceres as Calvin is not only adorable but sincere to stalwart as the emerging man of the house. Stephen Tyler Howell as The Voice is just sexy and the perfect bookend to Voice Over and Jack Nicholson could learn some stuff from him in the way of sultriness, I’m quite certain. Speaking of Jack Nicholson Thaddeus Shafer as Clyde Dwyer could give the man a run for his money on any such related and creepy role, only Shafer is far more superlative when it comes to either feigned or real vulnerability masquerading one over the other in a catch-as-catch-can match game such that one might never be able to distinguish between the twain. Sound by James Ferraro is toe tapping to eerie as evocations vacillate between sultry to sinister undercurrents. Set Design by Will Herder is inviting and evocative of extreme realism leaving one both enchanted and repelled when one throws in the mood altering lighting by Michelle Stann. Carly D. Weckstein’s cohesive direction is seriously the drapes that finally match the curtain tying the whole shebang together like The Dude’s most fabled room!

Jennifer K. Hugus was born at a very young age. At an even earlier age, she just knew she would one day write for the LA Beat! Having grown up in Massachusetts, France, and Denmark, she is a noted fan of Asian Cuisine. She studied ballet at the Royal Danish Ballet Theatre and acting at U.S.C. in their prestigious BFA drama program. She also makes her own jewelry out of paints and canvas when she isn’t working on writing absurdist plays and comparatively mainstream screenplays. Jennifer would like to be a KID when she grows up!
View all posts by Jennifer K. Hugus →
This entry was posted in Miscellanious, Theater and tagged Domestic Violence, Hot 'N' Throbbing, Paula Vogel, sexuality, The Illyrian Players, Watts Village Theatre Company. Bookmark the permalink.