Movies Have a Little Extra Magic at El Capitan 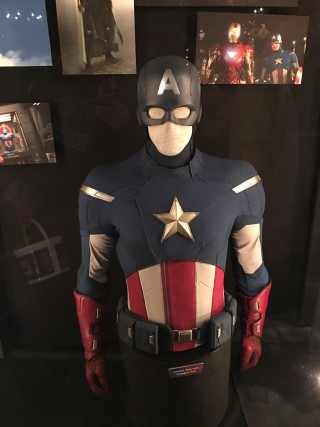 Photos by Todd Maugh for The LA Beat

Marvel’s “Captain America: Civil War” recently opened to all the hubbub and excitement one has come to expect from the cash cow that is the Marvel Cinematic Universe. This weekend, as expected, the movie grossed over 1 billion dollars internationally. With another feather in their Cap(tain America series), saying it’s a hit would be an understatement. Their success is especially sweet after the lackluster performance of rival studio Warner Brother’s “Batman vs. Superman”. Wait, lackluster? It made 847 million! Isn’t that considered a hit? No, it’s not. Not when you needed a billion. Not when Marvel does it over and over without batting an eye. But that’s a story for another day and not really the focus of this article. We’re here to talk about where to see this movie (or any movie for that matter) that you know you’re going to love.

I told the wife that I had a babysitter and free tickets to the El Capitan theater to see, yet another superhero movie. She was less than thrilled, but the tickets are free and this appeals to her frugal nature. We jump in the car, head to the redline, and five minutes later we’re on the subway out of North Hollywood. In two stops, we exit a stone’s throw from the theater located across the street on Hollywood Blvd. Among the bustle of Hollywood nightlife I’m thinking to myself,  “Man, this was really convenient.  No traffic, no parking hassles, and no bickering with my significant other about parking fees.”  Thank you, Metro. We saved so much time using public transit that we stopped to watch the tourists taking pictures with Superman and Spongebob.

The theater itself is a visual wonder that has a lot of history behind it.  Dating back to the 1920s, it definitely isn’t your corner AMC16 or Arclight. This is glamour, this is old school, this is Hollywood. Although it’s been refurbished multiple times since then, it still has that timeless look of iconic greatness. As we wait in line to have our tickets taken, my nose is assaulted by the aroma of sweets, chocolate, and ice cream coming from the parlor/Disney store attached to the theater. I make a mental note to stop here after our show is out.

We enter the theater where our VIP tickets entitle us to a complimentary drink and bucket of popcorn. The VIP ticket can be purchased for an extra $10. I was completely jazzed until I realized we had just waited 10 minutes in the wrong line and wouldn’t be receiving the very cool commemorative Civil War steel popcorn bucket. Or the very cool Black Panther, Captain America, or Iron Man collectible cups with what looked like little action figures on top, unless we paid extra for them. So, as excited as I was for these trinkets, the wife decided we would wait in the much shorter, much quicker-moving line where we were handed a 20 oz. drink of our choice and a sealed bucket of popcorn (did I mention she was frugal?).

Popcorn and drink in hand, we stopped to “marvel” at the large movie display. Giant backgrounds with cutouts of Cap’ and Iron Man duking it out in a pivotal moment from the film were there in a page ripped right from the comics. Of course, there was a line of people crowded around, cell phone in hands, taking their turns at joining in on the action. The selfie game was strong and I’m sure many a Facebook check-in was done at this spot.

Tickets are all reserved seating, which is a plus if you’re running late. The usher, dressed in classic old Hollywood bellman attire, took our tickets and guided us to our seats.  I immediately noticed that the music being played was not from a radio or speaker, but from an award winning organist who played his own mashup of superhero movie scores. Brilliant!  On each side of the theater hung a giant emblem representing team Cap on one, and team Iron Man on the other. These giant plastic decorations were easily 6 feet tall and very cool. Settling into my seat, the fanboy inside me was thoroughly immersed in the experience and I was smiling like an excited kid as the organist worked his way through John William’s score from the original “Superman”. The seats are nothing fancy like the newer theaters, so don’t expect a lazy boy. They’re retro, invoking the golden age of Hollywood which was in line with the entire theater ambiance: balcony seating, lavish curtains, and live music.

One of the highlights of the El Capitan experience was an appearance by a major new character in the film.  The crowd went wild, and cell phones were flashing all over the place. Magic in the making and well worth seeing the movie in this particular venue.

While the theater may look like it stepped out of old Hollywood, its technology is surely a thing of the future with amazing sound and a digital “true black” imagery, which results in more solid colors (as opposed to the muted greys), creating a more visually appealing picture. I was impressed. I’m kind of a snob when it comes to these things, and it wasn’t lacking at all in this area when the movie played in all its 3-D glory.

I don’t need to fill you in on the movie because, at this point, you’re maybe 1 of 3 people who hasn’t seen it. After the movie we were treated to “The History of Captain America” exhibit, curated by Marvel Studios.  Treasures such as Captain America #1 stills and concept art from all three movies were laid out. Every variation of Cap’s costume, from each of the films he has appeared in, including “The Avengers,” were on display.  In fact, every costume from the film was displayed except Spiderman, which has me thinking that maybe Sony still has some sway here.  It was a genuinely unique experience that even my wife enjoyed (and she isn’t a Marvel fan). It felt more like an event than just a movie date.  You can see a movie at any theater, but here you get…a little Hollywood magic. 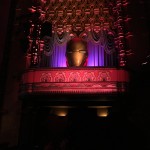 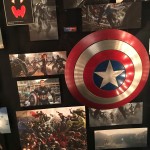 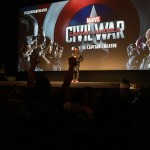 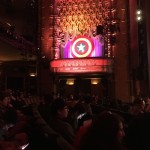 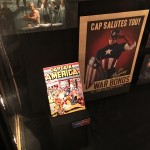 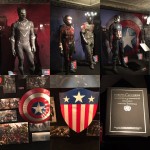