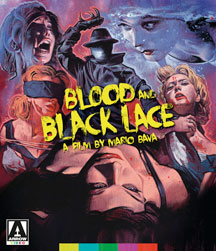 (1964, Arrow Video) The brutal murder of a fashion model leads to the revelation of a diary in which she detailed the various vices carried out at her salon, leaving both its managers (Cameron Mitchell and Eva Bartok) and other models to fear that the masked assailant who committed the first killing will strike again in order to keep the diary from falling into the hands of the police. A seminal film in the development of the horror genre, Mario Bava’s “Blood and Black Lace” eschews deduction in favor of atmosphere steeped in eroticism and remarkable sadism; the graphic murders carried out by the blank-faced killer over the course of the film would set the template for the next half-century of “body count” horror and suspense films, from Dario Argento to the “Friday the 13th” franchise. Few of those, however, could approximate Bava’s exceptional visual style: frames saturated with primary/primal colors and bold camera movements – dreamlike elements that contrast sharply with the graphic brutality of the crimes in “Black Lace.” The result is unsettling and memorable and an altogether unique experience for casual and devoted horror fans alike; Arrow Video’s Blu-ray features a 2K restoration made from the original camera negative and includes both new and previously released special features. Chief among the former is a richly detailed commentary by “Video Watchdog” editor and Bava expert Tim Lucas, as well a brace of interviews and discussions on the film and the history of the giallo subgenre with Argento, Bava’s son Lamberto (“Demons”), writer Ernesto Gastaldi, directors Helene Cattet and Bruno Forzan “(Amer”) and numerous historians and critics, and a 2012 short film, “Yellow,” which pays homage to giallo style and tropes. Alternate opening credits created for the American release of “Black Lace,” the Italian-language theatrical trailer and historian David Del Valle’s extensive, two-part interview with Mitchell from his “Sinister Image” cable series are ported over from the VCI DVD release. 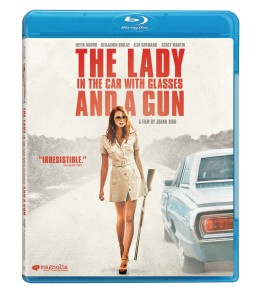 (2015, Magnolia Home Entertainment) Initially, the lady in question (Freya Mavor) has only the glasses: a meek secretary with an unrequited crush on her married boss (Benjamin Biolay), she drives him and his wife (Stacy Martin) to the airport and then takes his power-blue sports car on an unexpected trip to the ocean. Her impulsive gesture takes a sinister turn with each stop at a seaside town, where the residents claim to have met and cared for her, even taken money from her; the gun, along with a body in the trunk of the car and all they entail, are not soon behind. The second film version of Sebastien Japrisot’s 1968 novel of the same name (the first, made in 1970, starred Samantha Eggar and Oliver Reed), this French-Belgian production is long on style – ‘60s and ‘70s European fashion and culture, though the time period in which the picture takes place is never specified – and elliptical plotting and very, very brief on coherence; director Joann Sfar (“Gainsbourg: A Heroic Life”) jettisoned the script in favor of a hazy, aesthetically gorgeous series of images and suggested/imagined threats, lusts, etc. It’s effective as stream-of-consciousness viewing – and perfect for the mental haze that envelopes early morning viewing – but those requiring more to chew on in their thrillers may find their patience tested. Library track and soul devotees will appreciate the soundtrack, which features deep cuts tracks by Alan Hawkshaw, Wendy Rene, James Carr and Len Chandler, among others. Magnolia’s Blu-ray includes a fairly breathless interview with Sfar about the film, a gallery of images he painted during the production, and the dizzying theatrical trailer. 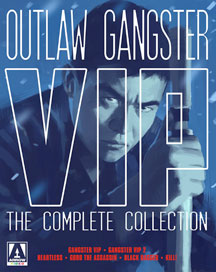 (1968, Arrow Video) Based loosely on a novel by Goro Fujita (“Graveyard of Honor”), who drew on his own experiences as a gangster, “Outlaw: Gangster VIP” follows the melancholy Goro Fujikawa (Tetsuya Watari from “Tokyo Drifter”), who endures a Dickensian upbringing (detailed in a black-and-white prologue) that turns him towards a lonely life of crime as a yakuza footsoldier. A brawl with a former friend (Kyosuke Machida) who works for an opposing gang lands him in prison, which upends his only chance at happiness with a sympathetic girl (Yasuko Sanjo); once released, he’s immediately in trouble with another gang, a more vicious iteration that doesn’t play by his code of wounded honor. Directed by Toshio Masuda (“Red Pier,” from Arrow’s “Nikkatsu Diamond Guys Vol. 1” set), “Gangster VIP” hews closer to American noir, with its doom-steeped heroes and inexorable sense of downward spiraling action, than the cooler yakuza films of Seijun Suzuki (“Branded to Kill) and others; it’s melodramatic, especially in the relationship between Goro and Yukiko (Chieko Matsubara), a girl hopelessly in love with him, but the more violent set pieces – several wall-to-wall battles pitting Goro against a host of thugs with short swords – are frenetic, and Watari is appealing as a damaged little boy in grown-up gangster gear. “Gangster VIP” is included as part of Arrow’s sprawling “Outlaw: Gangster VIP” set, which includes all six “Gangster VIP” films – released in Japan to tremendous box office returns between 1968 and 1969, but never in the United States – on three Blu-rays and three DVDs; critic Jasper Sharp offers a wealth of information on Nikkatsu, the venerable studio that issued the films, on a commentary track, while a half-hour featurette details Goro’s arc throughout all six films. 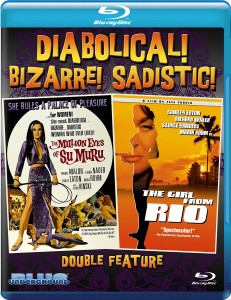 (1967, Blue Underground) Delirious mix of James Bond-style international adventure and Jazz Era pulp fantasy – with a none-too-subtle dose of femdom fetishism – starring Shirley Eaton of “Goldfinger” fame as author Sax (Fu Manchu) Rohmer’s villainess Sumuru, leader of an all-woman army determined to supplant the patriarchal world government structure with a kinder, gentler female-led society (albeit through torture and murder). CIA man George Nader and his playboy sidekick (Frankie Avalon, of all people) is dispatched to stop her from assassinating the leader of Sinonesia (Klaus Kinski, mincing with abandon as the polymorphously perverse president) and in turn, threatening vital Western interests in his country. Though sloppily directed by Lindsey Shonteff, who went on to helm some of the worst Bond knockoffs (“No. 1 of the Secret Service”), “Sumuru” benefits from Eaton’s steely presence and the flip, bemused performances by Nader, Avalon and Wilfred Hyde-White as their British government contact; location filming in Rome and Hong Kong and at Shaw Brothers Studios also lends some much-needed production value. Tempering these is the tiresome leering tone fixed on every female who wanders in front of the camera, and lingering scenes of Sumuru’s soldiers (or “slaves,” as they’re referred to in the credits) whipping or strangling male victims between their thighs; producer Harry Alan Towers, who never met a kink he didn’t like, is probably the architect of these odd flashes of sadism. Towers and Eaton later reunited for a semi-sequel, “The Girl from Rio,” which finds her leading an all-female nation in South America. Directed haphazardly by Jess Franco and featuring a dissolute George Sanders, it’s also included on the Blue Underground disc. 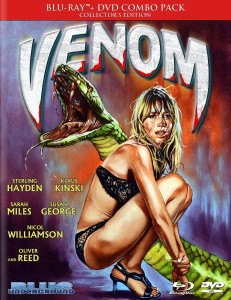 (1982, Blue Underground) German criminal Klaus Kinski (hello again) enlists the maid (Susan George) and chauffeur (Oliver Reed) in a scheme to kidnap the son (Lance Holcomb) of a wealthy hotelier, but almost immediately, there are problems: the boy’s grandfather (Sterling Hayden) must also be taken hostage, and the police, led by grumpy Scottish inspector Nicol Williamson, immediately surround the house. Neither of these complications, however, is as disconcerting – or dangerous as an unexpected guest: a lethal black mamba, accidentally shipped to pet-loving Holcomb and let loose in the house. A host of production problems, from the departure of original director Tobe Hooper (replaced by Piers Haggard) and writer David Sherwin (“O Lucky Man!”) to the white-hot hatred between Kinski and Reed, made this British production a difficult experience for most of the participants, and that antipathy (and animosity) shows in the haphazard plotting and editing. And while much is made of the snake’s near-mythical deadliness, it remains off-screen for most of the running time, save for a grisly attack on George and the tense finale. The cast is left to shoulder the picture, which for the most part, they do: watching such volcanic personalities as Kinski (who’s far more reptilian than any snake), Reed and Hayden square off in the same frame is to witness a miracle of scenery consumption, and there’s agreeable support from such fellow eccentrics as Williamson, Sarah Miles as a worried herpetologist and Michael Gough as a fictionalized version of David Ball, the real-life Zoological Society of London’s Overseer of Reptiles. Blue Underground’s Blu-ray ports over most of the extras from its 2003 DVD release, including chatty commentary from Haggard and a brace of trailers and promotional material; the new extra is an informative booklet on the film’s history by former “Fangoria” editor (and all-around nice guy) Michael Gingold.

Paul Gaita lives in Sherman Oaks, California with his lovely wife and daughter. He has written for The Los Angeles Times, LA Weekly, Variety and The Fix, among many other publications, and was a home video reviewer for Amazon.com from 1998 to 2014. He has interviewed countless entertainment figures from both the A and Z lists, but his favorites remain Elmore Leonard, Ray Bradbury and George Newall, who created both Schoolhouse Rock and the Hai Karate aftershave commercials. He once shared a Thanksgiving dinner with celebrity astrologer Joyce Jillson, and regrettably, still owes the late character actor Charles Napier a dollar.
View all posts by Paul Gaita →
This entry was posted in Movies and tagged Arrow Video, Blue Underground, Magnolia Home Entertainment. Bookmark the permalink.

One Response to Movies Till Dawn: All Night International Crime Wave