Album Review and Band Interview: Evilution by The Black Widows 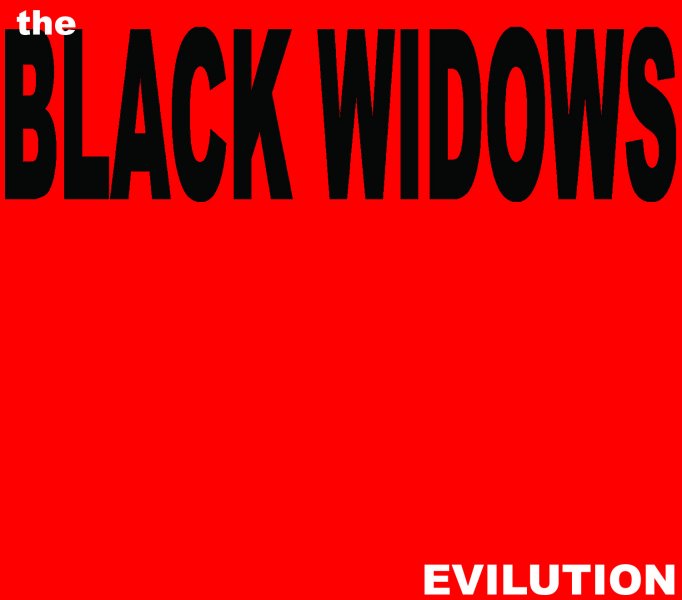 Southern California’s favorite arachnid rockers are back and in a massive way.  Evilution, the much-anticipated follow-up to 2013’s Revenge of the Black Widows, delivers 16 blistering tracks of pure instrumental evil.  The Los Angeles Beat serendipitously heard a brief sample of unmastered tracks more than a year ago and has been salivating for the final product ever since.

For the tragically uninformed, The Black Widows’ mantra is “All Instrumental.  All Original.  All Evil.”  Their carefully nurtured cocktail of surf music, punk and hard rock is more Molotov than alcoholic, fueling the band’s incendiary live performances.  The eponymous Evilution, which closely follows the band’s blueprint, is indeed evolutionary and captures the anonymous rockers with a significantly heavier and harder sound.  Lush surf guitar lines are still juxtaposed with driving, angular rhythms and crisp guitar riffs, however Evilution presents itself with more urgency and attack. Extensive use of double kick drum, suggestive of a heavy weight champion working a heavy bag like a speed bag, punctuates many of the album’s songs.  This album is angrier and more in your face. Evilution makes a strong case for adding “All the Time” to the end of the band’s mantra. 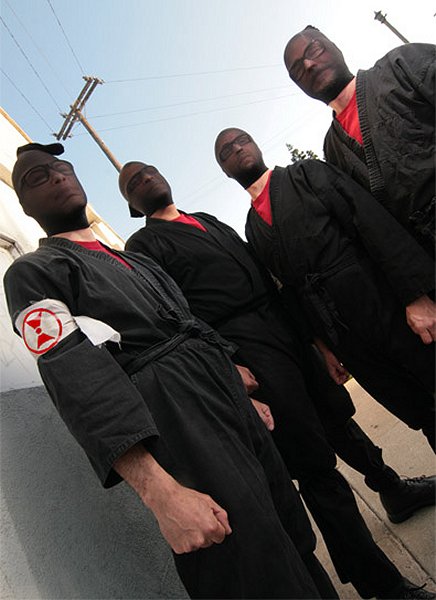 There are enough subtle and not-so-subtle hooks delivered at lightning speed to fascinate the most jaded hard rocker, angry punker or desperate adrenaline junkie.  While the whistle of the guitar string 26 seconds into “Neo Invictus” and the right-left-accented, triplet double-kick-drum roll 32 seconds later represent just a few of the many bits that make Evilution awesome, this latest Black Widows’ release is seamless and whole, cut from a single slab of granite.  Three interludes that reprise Black Widows songs in classical guitar form demonstrate the band is dressed for any occasion despite only having one uniform.  No less than five songs feature cow bell. “Psycho Breed,” perhaps the album’s pinnacle, explodes with a cowbell, snare, kick drum intro that makes the beginning of Grand Funk Railroad’s “American Band” sound silly.  The final track “Sacred Engine,” which evokes an armored division crashing through a battlefield, makes golden-age Metallica sound wimpy.  Ultimately, Evilution’s awesomeness speaks for itself without mincing words. 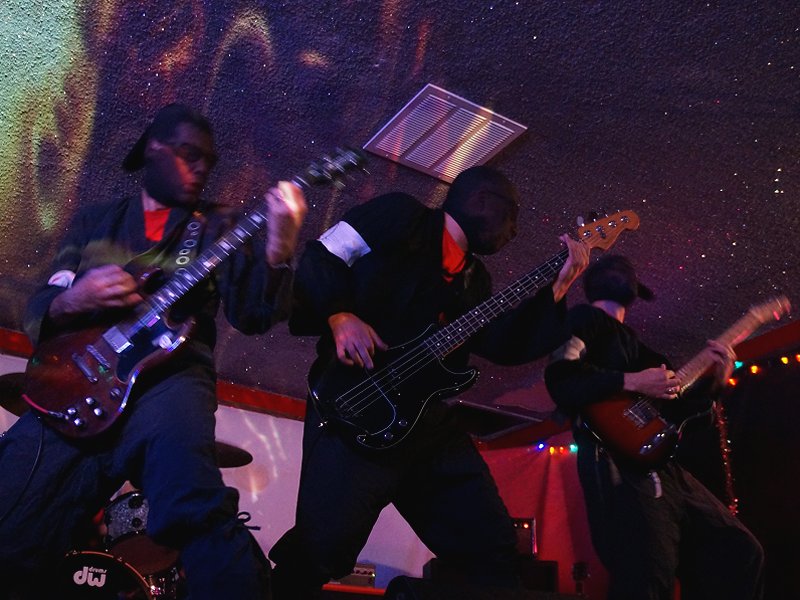 The Los Angeles Beat recently met with The Black Widows to discuss the new recording and their latest affairs:

The intensity of “Evilution” cannot be measured in a linear manner, only logarithmically.  Where does this increased heaviness come from?

The heaviness was always there, but now you can hear it better.  Advanced recording techniques. We took over a studio.  Everything was done to our exact specifications, including the cooking.  The hardest part of the process is shattering people’s preconceived notions. You play instrumental music and they immediately think you’re a surf band, even if you don’t remotely sound like that.

While The Black Widows are commonly feared and not to be “messed” with, you are really benevolent and, in many ways, guardians of the public interest.  Can you elaborate?

Never have we been accused of being benevolent or guardians of anything.  But one crusade we do have is to bring back instrumentals to Top 40 radio.  There was a time you could hear HIT RECORDS that didn’t have singing.  And then one day they were gone. What the hell!!?!!   So The Black Widows are gonna change all that.  We are gonna rule the charts.  We’re thinking within the next 12 months.

A lot has changed in the three years since “Revenge of the Black Widows” was released.  ISIS, the ascendancy of demagogue Donald Trump as the 2016 Republican presidential candidate, anti-immigration movements, and rising police brutality suggest that the end of the world is near.  As arbiters of justice, it seems that The Black Widows are more important than ever. Can you reflect?

There’s an ugly, dark energy surrounding the world right now, and people are giving in to it without knowing.  It’s sometimes a subtle persuasion, sometimes a blatant affront.  It all comes down to the power of saying “NO!  ENOUGH IS ENOUGH.”  But for some reason, these days, enough is never enough.  They can’t seem to get enough of people getting killed. Like they used to say: DON’T TRUST THE MAN!  Even if it’s a woman!

On the track “Psycho Breed,” the band is dangerously close to breaking its rule of “all instrumental” as you shout in unison 1-2-3-4 twice in the song’s intro. What does this mean?

It means we can do anything we want.  We write the rules.  We break the rules.  We re-write, re-break.  You know, like Michelangelo and Coltrane and Evel Knievel.

What does the future hold for The Black Widows?

The 7-inch will be our next format to revolutionize.  We have an idea.  Never been done. This idea is so good we’re surprised nobody’s thought of it.  And no, you gotta wait.

Has the movie or TV industry finally gotten hip to The Black Widows?  Any soundtracks on the horizon?

I’m sure they can smell us on the horizon.  We’re prepared to take over by sheer force if necessary.  And we will.  We’re thinking movies, TV with music by and starring The Black Widows.  Comic books, video games, pinball even!  Ain’t no language barrier.  Ya can’t see our skin so ya can’t hate us.  Sky’s the limit daddy-o.

The Black Widows will celebrate the release of Evilution on Friday, July 15 at Café NELA, Los Angeles’s premiere destination for underground music.  Supporting bands include The Golden Rulers, a reunited B-Movie Rats, and Patt Todd & the Rank Outsiders.

Evilution is available for purchase at The Black Widow’s website.