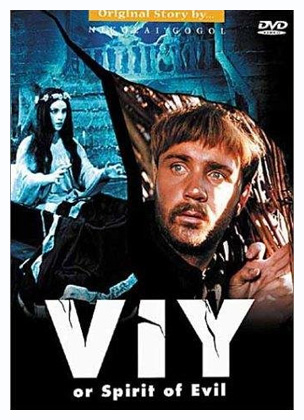 Everyone has their staples for Halloween watching, like John Carpenter’s “Halloween” and “Nightmare Before Christmas.” But be forewarned, gentle reader, because your master of Scarimonies (God, I sound like the Crypt Keeper), Dukey Flyswatter, will suggest some gems and themes that may have flown drastically under your radar, like a schizophrenic Vampire Bat.

This week’s theme is Horror Obscura: The foreign market. Most scream fanatic fiends will know these flickers from across the pond and beyond, but I’m always surprised at how many of these get the short shrift on the Devil’s A-List.

Loosely based on a story by Nikolai Gogol, a less than committed young monk with a weakness for drink and young women must watch over the corpse of a man’s young daughter for three days so the Devil does not take her soul. He is the only one who knows that she is already claimed by the Devil and a host of bizarre demons. I wouldn’t take any hallucinogens while watching this. It’s already like immersing yourself in a comedic acid trip as is.

Dukey Flyswatter, (AKA Michael), is a native Angeleno with strong roots in the underground scene since the 70's. He is a screenwriter (Blood Diner, Star Slammer), actor(Surf Nazis Must Die, Betty Page:Dark Angel, etc.), freelance writer. He is best known for his Horror Metal rock group, Haunted Garage, which he founded in the 80's and has now reformed, with him taking his usual role as lyricist and singer.
View all posts by Dukey Flyswatter →
This entry was posted in Miscellanious, Movies. Bookmark the permalink.