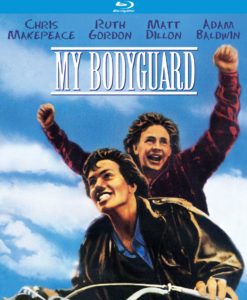 “My Bodyguard” (1980, Kino Lorber) Targeted by a bullying goon (Matt Dillon) at his new school, fifteen-year-old Clifford Peach (Chris Makepeace) finds what he believes to be protection for hire in the hulking form of Ricky Lindemann (Adam Baldwin), whose fearsome reputation belies a hidden hurt. Actor Tony Bill’s directorial debut – a well-loved title among former Reagan-era teenagers – is, like most of his efforts behind the camera, unabashedly sentimental, and holds up best when it lets its young and immensely likable cast act like real teenagers and not miniature, idealized adults (credit due to Alan Ormsby’s smart script). Makepeace, Dillon and Baldwin are all terrific and believable, as is Paul Quandt as the doomstruck Carson and Joan Cusack in her film debut; they’re well abetted by Martin Mull, Ruth Gordon and John Houseman as Makepeace’s widowed father, on-the-make grandmother, and her latest suitor, respectively, while a host of Chicago-area comedy and stage talent, including Joan Cusack’s dad, Dick Cusack, George Wendt, and future “SNL” player Tim Kazurinsky, fill out the supporting players (Jennifer Beals and Dean Devlin are in there, too). Kino’s Blu-ray includes commentary by Bill and film programmer Jim Healy, as well as the original trailer and a TV spot. 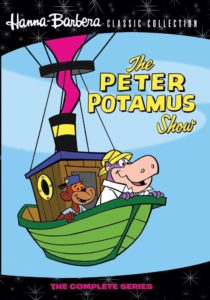 “The Peter Potamus Show” (1964-1965, Warner Archives Collection) Seized by a permanent, if amiable sense of wanderlust, purple hippo Peter Potamus (voiced by the great Daws Butler) and his monkey sidekick So-So (Don Messick, equally great) travel the globe in their hot air balloon in search of adventure. The boundaries between fantasy and reality also appear to be within their grasp, as evidenced by the debut episode, “Fee Fi Fo Fun,” which finds Peter and So-So contending with not only a smart alecky Jack (of Beanstalk fame) but a giant as well. As with many other Hanna-Barbera series, “Peter Potamus” includes two additional segments: “Breezly and Sneezly,” with a polar bear (Howard Morris) and his seal pal (Mel Blanc, speaking of great) pulling a Yogi Bear and raiding an Arctic army base for various reasons (in “No Place Like Nome,” it’s to find an outlet in which to plug a refrigerator – don’t ask) and “Yippee, Yappee and Yahooey,” about a trio of hapless dogs serving as Musketeers for a short-tempered (and statured) king, who in “The Volunteers,” forces them to train with a by-the-books sergeant (Butler, using his Phil Silvers/Hokey Wolf voice). All three are prime examples of H-B animated series, which borrowed the antic action, snappy patter and function-over-form plotting of period sitcoms; though it doesn’t quite reach the irreverence of “Huckleberry Hound” or even its companion series, “Magilla Gorilla,” “Peter Potamus” is uncomplicated and satisfying fare for new and vintage Saturday morning devotees alike. Warner Archive’s three-disc set offers the entire single-season run of “Peter,” and includes the original bumper promos for Ideal Toys. 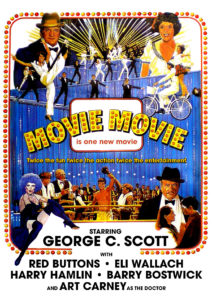 “Movie Movie” (1978, Kino Lorber) Agreeable and tongue-in-cheek tribute to studio programmers of the ’30s and ’40s, presented as a double feature and featuring George C. Scott as the lead in both pictures. In the black-and-white “Dynamite Hands,” he’s a cagey old boxing manager who finds a contender in Harry Hamlin, a lily-white delivery boy who takes up the sport to pay for his sister’s eye operation; Eli Wallach is the well-heeled gangster with Hamlin’s worst interests at heart, while good girl Trish Van Devere and vamp Ann Reinking vie for the kid’s attentions. And in the Technicolor “Baxter’s Beauties of 1933”, Scott is a Broadway impresario who, upon discovering that he has a month to live, pulls out all the stops to produce one last musical hit with the help of accountant Barry Bostwick (who gets his share of show-stopping numbers, expertly handled by director Stanley Donen). The script, by Larry Gelbart and Sheldon Keller, offers a dead-on take of the stage-driven melodrama and woozy pulp dialogue of the period (“After a girl’s had a taste of mink, she can’t go back to pastrami”), which the cast delivers with only the slightest nod to parody; Donen, too, has an instinctive grasp for the threadbare glamour ad brisk pace of wartime B-pictures. With Red Buttons, crusty as day-old bread as Scott’s sidekick in both films, Kathleen Beller, choreographer Michael Kidd (who provides appropriately overripe dance sequences for “Baxter’s Beauties” and a berserk musical number for Reinking in “Dynamite Fists”), Jocelyn (sister of Marlon) Brando, and Art Carney as the voice of reason in both stories. Kino’s Blu-ray includes an intro with George Burns that ran with the theatrical version, as well as new interviews with Beller, Bostwick and Hamlin.

Paul Gaita lives in Sherman Oaks, California with his lovely wife and daughter. He has written for The Los Angeles Times, LA Weekly, Variety and The Fix, among many other publications, and was a home video reviewer for Amazon.com from 1998 to 2014. He has interviewed countless entertainment figures from both the A and Z lists, but his favorites remain Elmore Leonard, Ray Bradbury and George Newall, who created both Schoolhouse Rock and the Hai Karate aftershave commercials. He once shared a Thanksgiving dinner with celebrity astrologer Joyce Jillson, and regrettably, still owes the late character actor Charles Napier a dollar.
View all posts by Paul Gaita →
This entry was posted in Movies, Television and tagged Kino Lorber, Warner Archives Collection. Bookmark the permalink.

One Response to Movies Till Dawn: Digital Comfort Food for Post-Election Neuroses Edition