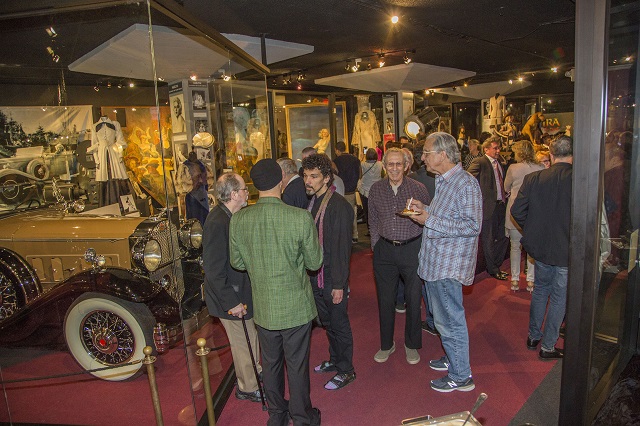 When you think of beautiful, bodacious, yet badass, screen presences, certain names might come to mind such as Sigourney Weaver in “Aliens,” Carrie Fisher as a scrappy Star Wars princess, or even Rizzo aka Stockard Channing aspiring to her very own version of Greased Lightning! But nothing compares to some of the first great grand dames of drama by way of the attitude rather than the action of some of our best black and white actresses.  Couple the above with extreme elegance and a classic 1930s flair and you get none other than Jean Harlow to speak nothing of The Hollywood Museum’s latest exhibit: “Jean Harlow: Hollywood’s First Blonde Bombshell”.

The display, which opened earlier this March, in celebration of what would have been Harlow’s 106th birthday, encompasses all the most deliciously shadowy photographs of the past from Harlow’s life and career the most arresting of which displays Harlow hugging her very own mother Jean Bello who (first name notwithstanding) could almost pass for her twin, a pair of beautiful white bookshelves adorning Harlow’s house during her life (what many might dub an “entertainment center” this day in age), Harlow’s/Harlean’s Dolly Dingle doll (circa 1914) made of painted composition and cloth (and much too cute and Kewpiesque to be considered the least bit creepy—so common a quality in old doll babies), and the piece de resistance I don’t even know how they managed to transport on to the second floor presentation:  Harlow’s circa 1932 Deluxe Eight 903 Sport Phaeton Packard which she drove off the lot for just $359.00—a rich man’s winnings for sure back in those days. 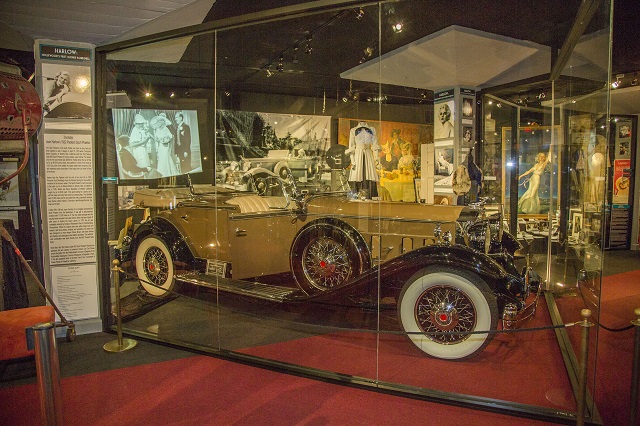 Above and beyond all other material to ephemeral goods, a most nostalgic keepsake has recently resurfaced in the form of the life-sized Tino Costa painting commissioned by Harlow’s mother. Said haunting and otherworldly illustration was hung in Bello’s house after Harlow’s death, but heretofore had been lost for 50 years and is now on open display for the first time since 1937! 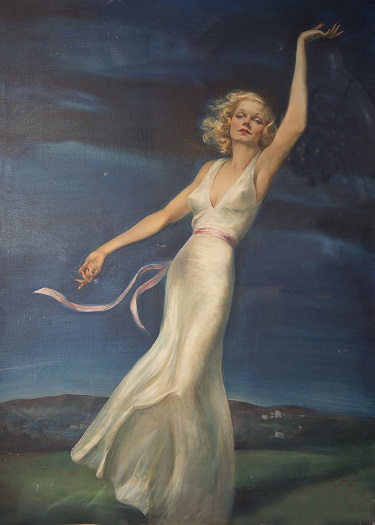 Other exhibit pieces of note include, a duet of sterling silver diaper pins used to keep baby Harlean fashionable even then, more to the point: DRY, the Grand Hotel ledger circa 1932 signed by Harlow herself and displayed at the Grauman’s Chinese Premiere, an embroidered stool from her home on ClubView Drive, some of Harlow’s personal outfits, a never before candid photo of a ten-year-old Harlean used in the film “Saratoga”, and last but not least an autographed picture of Eleanor Roosevelt made out to Harlow, dually significant in that she was the first female Hollywood star ever to be invited to a Washington DC celebration in 1937!

One of the many leading ladies to be discovered by the illustrious yet elusive Howard Hughes, Harlow was his first! Born Harlean Carpenter in 1911 in Kansas City, MO. Harlow would go on to become one of Hollywood’s most noted leading ladies, to speak nothing of America’s first blonde bombshell, a look that would be created by Max Factor in the exact and self-same building as the related exhibit down on the bottom floor! Many screen actresses and pop goddesses would go on to emulate the look and style years and decades later up to and including Madonna, Lady Gaga, and Marilyn Monroe. Monroe would go on to emulate Harlow in the fifties wearing the same outfit, copping the same pose along with the exact same short cropped hairstyle.  Said photo duet featuring a duplicate pose of Marilyn Monroe and Harlow alike is one of the pictorial highlights of the exhibit!

But nothing compares today with Harlow’s brawny demeanor onscreen the likes to which modern day actresses could not even hold a candle—aside from Mae West of course: A sassy Hollywood precursor.

According to Barry Livingston (aka Ernie of My Three Sons fame) in attendance that night, “Jean Harlow was before my time but as a fan of the movies and particularly a fan of John Barrymore–‘Dinner at 8’ which was one of her great roles–I immediately recognized the brilliance of her talent!  And [I loved] ‘Public Enemy’ ‘cause James Cagney was another one of my favorite actors. So, [she worked with] great stars…and then she created…her own wonderful brand… ‘The Harlow’ which is synonymous with the platinum blonde and tough talkin’ sassy personality! I believe she was the first star too that went braless. ‘Cause she was pretty adventurous back in the day. That was in the flapper era. She was a groundbreaker in a lot of ways. Those women/characters, forgive me for the use of the word, but they were affectionately known as ‘broads’ or a ‘dame!’”

“OZ” actor, and creator of groundbreaking new sitcom “Life Interrupted” Steven Wishnoff was also on hand on the opening night of the exhibit and not only seconded Livingston’s sentiment but raised some double eyebrows at Ms. Harlow’s very own—eyebrows that is!!! “She was gorgeous. I don’t remember seeing anybody with eyebrows that thin!  I mean, I was a little kid [when I first saw her]. I don’t even think my mother was 5 years old when ‘Dinner at 8’ was made. But it was the first thing I remember because in New York they had the ‘Million Dollar Movie’ [on Sunday afternoons]. I don’t know why but as a little kid I was just kind of struck by this beautiful blonde woman with very skinny eyebrows ‘cause I had never seen that before but then years later when you grow up…you begin see, she was kind of a trail blazer… She was kind of as saucy as Mae West but in a very different way and you know women then were allowed to be curvy… Mae West was almost tough. Jean Harlow had that feminine side; that very edge, that softness, that allure, as opposed to being in your face with it. So it was kind of a lot and I read somewhere she told off a reporter: ‘You all call me Saucy. I don’t know where you got that idea!’ …All these photographs are amazing,” Wishnoff continues, referring to all the black and white glory surrounding us (specifically the Jean Harlow/Marilyn Monroe emulation), “and it’s clear that if you look at the imagery and the way she was shot: would Norma Jean have been Marilyn Monroe? And even the way the makeup is put together…there’s the slight mole and all of that. I wonder if it’s intentional?” 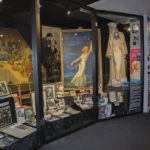 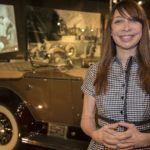 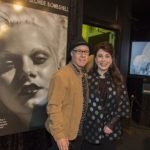 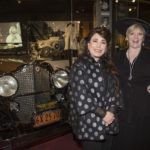 A very naturally brunette “Young and the Restless” star Kate Linder copped her own comparative sentiment, ”The color of the blonde bombshell, since I could never be that, that’s one of my favorite memories [of Jean Harlow]!”

Harlow’s life, then career lasted just 26 years concluding in a most harrowing-to-mysterious death the result of which was ostensibly kidney failure.

“We are thrilled to unveil our ‘Jean Harlow: Hollywood’s first Bombshell’ exhibit on Harlow’s Birthday here at the Hollywood Museum,” exclaims Hollywood Museum President and founder Donelle Dadigan. “This is where Hollywood’s make-up king max Factor worked his magic on jean; and years later one of Harlow’s biggest fans grew into a young starlet at Max Factor’s hands, giving her the updated version of Jean Harlow’s Platinum blonde hair color—She became Miss Marilyn Monroe.  It all started right here in the Max Factor Building that’s now the Hollywood Museum. The museum’s curatorial team has enjoyed working with the exhibit’s guest curator Darrell Rooney.”

Jennifer K. Hugus was born at a very young age. At an even earlier age, she just knew she would one day write for the LA Beat! Having grown up in Massachusetts, France, and Denmark, she is a noted fan of Asian Cuisine. She studied ballet at the Royal Danish Ballet Theatre and acting at U.S.C. in their prestigious BFA drama program. She also makes her own jewelry out of paints and canvas when she isn’t working on writing absurdist plays and comparatively mainstream screenplays. Jennifer would like to be a KID when she grows up!
View all posts by Jennifer K. Hugus →
This entry was posted in Events, Miscellanious, Movies and tagged Hollywood Museum, jean harlow. Bookmark the permalink.