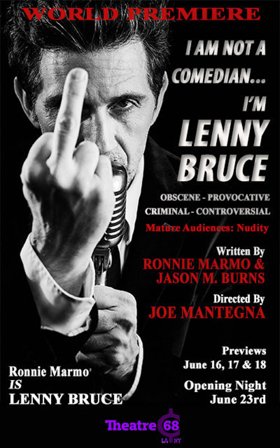 Lenny Bruce was not only a comic legend, but was one of the greatest artists of the 20th century.  His work had an impact on everything from politics, music, film and of course comedy. It’s because of Bruce’s legal battles challenging the first amendment that gave comedians Don Rickles, Richard Pryor, Chris Rock, Joan Rivers, Bill Hicks, George Carlin, just to name a few. the right to speak their mind without fear of legal consequences.

Sadly Lenny’s commitment to free speech and his numerous arrests for obscenity took a heavy toil on him. Lenny Bruce died in 1966 in the bathroom of his Hollywood Hills home from an accidental  drug overdose at the age of 40,  but his legacy has and will always live on.

‘I Am Not A comedian…I’m Lenny Bruce’, directed by the multi-award winning actor Joe Mantegna and written by Ronnie Marmo and Jason M. Burns, is one play you do not want to miss and that is because of the exceptional portrayal of Lenny by Ronnie Marmo.

Marmo masterfully takes us through a journey of Lenny Bruce’s troubled life, including his successes, failures, his marriage to Honey Harlow, a stripper he met in a bar, the birth of his daughter Kitty and his relationship to his Long Island Jewish mother Sally Marr, a stand-up comic, dancer, actress and talent spotter, who greatly influenced his act.

Lenny was one of the first comedians that integrated satire, politics, religion, sex and vulgarity.  As the title suggests, he didn’t consider himself a comedian, but an oral jazzman like the great Charlie Parker.  As I watched Marmo on stage I couldn’t help but imagine what Lenny would say if he was alive in this political climate.

Joan was born in Brooklyn and spent many years working as an actress in New York City. Even though she traveled extensively, Joan couldn't imagine living anywhere else.. Well one day, she met someone at a party who regaled her with stories about living in L. A. specifically Topanga Canyon. A few weeks later she found herself on an airplane bound for Los Angeles. Joan immediately fell in love with the town and has been living here for the last twenty years and yes, she even made it to Topanga Canyon, where she now resides, surrounded by nature, deer, owls and all kinds of extraordinary alien creatures.. Joan continued acting, but for the last several years (besides reviewing plays and film) she has been writing screenplays. Joan was married to a filmmaker who created the cult classic films, (way before she knew him) Faces of Death. As a result of his huge following, they created a funny movie review show entitled Two Jews on Film, where Joan and her husband, John would review movies and rate them with bagels You can see their reviews by going to youtube.com/twojewsonfilm. Although it's now only one Jew - Joan is occasionally joined by her beautiful Pekingnese and Japanese Chin.
View all posts by Joan Alperin →
This entry was posted in Theater and tagged 'I Am Not A Comedian...I'm Lenny Bruce, comedian, First Amendment, Joe Mantegna, Lenny Bruce, north hollywood, One Man Show, Ronnie Marmo, Theatre 68. Bookmark the permalink.