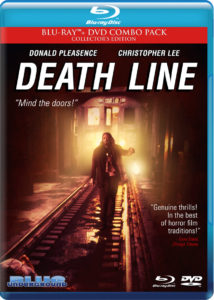 “Death Line” (1973) The discovery of an injured government official in a London Underground station leads American David Ladd (son of actor Alan Ladd, and brother of producer Alan Ladd, Jr.) and his British girlfriend (Sharon Gurney), along with a cynical police inspector (Donald Pleasance), into the depths of the city, where they discover the ravenous but pitiable descendent (Hugh Armstrong) of 19th century tunnel workers left for dead after a cave-in. Released in the States as “Raw Meat” and edited to emphasize the (minor) gore, this British production by American director Gary Sherman (“Vice Squad’) plays more like a macabre political thriller with a strong streak of social commentary; though a cannibal, Armstrong’s “Man” – whose language is limited to a single, mournfully uttered phrase (“Mind the doors!”) – is more victim than monster, reduced to barbarism in a desperate attempt to save his mate, while the real villain appears to be a heartless government (represented by Christopher Lee in a cameo turn as a genteel-looking but venomous official) that left his ancestors to die in an effort to save a few pounds (not unlike the current administration’s health care plan). Upon discovering the “Man’s” secret, Pleasance, in a rare sympathetic turn as a working-class cop, can only shake his head in disgust at such disastrous classism. Blue Underground’s Blu-ray/DVD set includes the original British cut of the film, as well as commentary by Sherman, who joins Ladd, Jr. and co-producer Gary Kanter for an interview; David Ladd, co-producer Paul Maslansky and the modest Armstrong are also interviewed; the disc includes a wealth of promotional material, including trailers, radio spots and poster art. 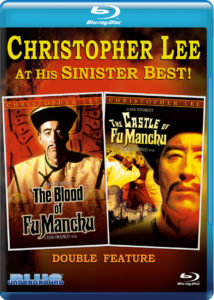 “The Blood of Fu Manchu”/”The Castle of Fu Manchu” (1968/1969) The fourth and fifth (and final) entries, respectively in a series of overripe pulp thrillers produced by the notorious Harry Allan Towers and starring Christopher Lee as Sax Rohmer’s Chinese mastermind, Fu Manchu. Eurocult legend Jesus Franco stepped into the director’s chair for both efforts, and in typical fashion, his work here is a mix of wildly clashing genres, hastily constructed setpieces and the occasional, fevered flash of atmosphere or imagination. The plots, which have nothing to do with their source material, concern Fu’s attempts to dominate the world through women with poisonous kisses in “Blood” and (hence the film’s alternate title, “Kiss and Kill”) and freezing the oceans, are largely negligible and are swept aside in favor of baroque torture sequences, free-for-all fights between Fu’s army and the forces of good (led by a terminally bored Richard Greene as Sir Nayland Smith) and zoom overuse. For some, the casting of an Anglo actor as Fu and archaic attitudes towards Asians will render these titles unwatchable, but those who can overlook this issue, or diehard Lee/Franco followers, will find them either interminable dull and/or silly, or a banquet of badfilm riches. BU’s Blu-ray includes trailers and interviews with the primary players ported over from their 2003 DVDs, including Lee, a garrulous Franco, Towers, actress Tsai Chin, who discusses the qualms she felt about the film’s racial issues, and Shirley (“Goldfinger”) Eaton, who airs her displeasure about Franco secretly inserting footage of her from another film into “Blood.” 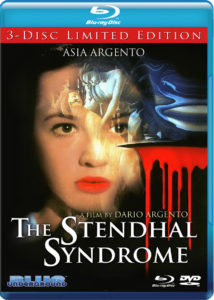 Blue Underground also has a limited edition three-disc Blu-ray of Dario Argento‘s 1996 thriller “The Stendahl Syndrome,” starring his daughter Asia (“XXX”) as a young police detective who succumbs to the titular condition – an overwhelming, hallucinatory response to viewing great art – while on the trail of a brutal killer. What happens to her before, during and after her blackout is marked by some remarkable visual setpieces by Argento and frequent Fellini cinematographer Giuseppe Rotunno (scored by Ennio Morricone) but also a barrage of truly ugly, graphic violence that often crosses the border from the stylized mayhem of his early gialli to misogynistic endurance tests. Fans of the film will appreciate the remastered, uncut edition of the film, as well as the array of new supplements – including commentary by Troy Howarth, interviews with Asia Argento and co-writer Franco Ferrini, and liner notes from Michael Gingold – and material from their previous DVD release, including lengthy conversations with Argento pere, consultant Graziella Margherini, who largely defined the syndrome in a 1979 book, and special effects designer Sergio Stivaletti (“Demons”).

Paul Gaita lives in Sherman Oaks, California with his lovely wife and daughter. He has written for The Los Angeles Times, LA Weekly, Variety and The Fix, among many other publications, and was a home video reviewer for Amazon.com from 1998 to 2014. He has interviewed countless entertainment figures from both the A and Z lists, but his favorites remain Elmore Leonard, Ray Bradbury and George Newall, who created both Schoolhouse Rock and the Hai Karate aftershave commercials. He once shared a Thanksgiving dinner with celebrity astrologer Joyce Jillson, and regrettably, still owes the late character actor Charles Napier a dollar.
View all posts by Paul Gaita →
This entry was posted in Movies and tagged Blue Underground. Bookmark the permalink.