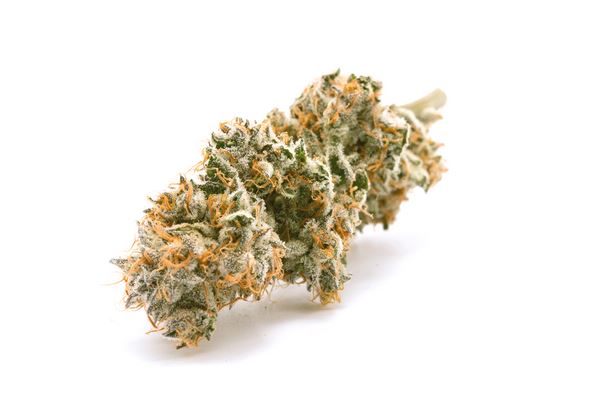 This Blueberry Dome strain is immediately appealing to me, not just because it sounds like something I would eat at Porto’s after getting high, but because it strongly resembles the very first super-potent indica weed I ever encountered, way back in 1989. It was hard to find, and it was super expensive. But on those rare and special occasions when it could be found, then look out, head! I still remember the first time I saw it, smelled it, tasted it. Three decades later, I haven’t had many more memorable cannabis experiences. So it’s nice to discover a close relative of that magical first, locally available from THC Design.

This experience proved to be a very good example of why weed varietals should never strictly be judged on their reported THC percentage. This strain clocks in at a modest 16%, compared to other sativa or hybrids I’ve recently sampled that are more in the 23 to 26% range.

But my wife has just asked me twice in ten minutes how stoned I am, and I have had a hard time answering. Because really, how do you quantify that? Numerically? With adjectives? Through relativity? Eventually, stunned silence becomes its own answer to the question.

So, let’s just say, this weed I am on is having the desired effect and then some. It may have taken two tokes instead of one, but it’s taking me well over the line, sweet Jesus. Experts probably have an answer for why indica strains are so satisfying despite numerically lower THC ratings – maybe it’s the higher CBD content relative to sativas, an alternate terpene profile, or just the fact that it goes down so easily, you can smoke quite a bit before it feels like too much. It is what you could call “creeper weed,” in that the full effects take a few minutes to creep up on you.

Once again, THC Design’s delivery is pretty primo. All the buds are nicely manicured and look a lot like those pictures on the website. Flame-orange hairs dance on crystal-coated leafy greens, as that telltale indica smell perfumes the room. It really is a pretty plant. The flavor has notes of lemongrass and Thai iced tea, which would seem to make it a better pairing for a Thai food meal than even Thai bud.**

To test this theory, I ordered up some pad prik king with pork, yellow curry with chicken, pad see eew, pork satay and fried shrimp from the Thai place down the street. That turned out to be a great idea. Not only did I experience that subtle, delightful harmony that comes from a good flavor pairing, I had the enhanced sense of well being that comes from being stoned. I’m not strictly in need of an appetite enhancer, but I did receive one with this bud, along with terpenes that promote relaxation and contain a gastro-protective. Perfect!

I don’t think I would describe the effect this is having on me as “energetic” so much as “hypnotic.” I had a feeling it would be a good idea to listen to some dub reggae while checking this out, and the classic Augustus Pablo album King Tubby Meets Rockers Uptown is causing me to experience the feeling of universes collapsing infinitely inside my peritoneal cavity right now. I don’t see that listed among the effects in the brochure, so it seems responsible to mention it here. I can’t guarantee anyone else would have the same result, as it could partially be the effects of Thai food. But it’s definitely not ENTIRELY the effects of Thai food.

There’s only one cautionary note. Mario Kart racing wasn’t as much fun on this stuff as I’d imagined – I ended up quitting after one tournament, seeking out more 70s dub stuff on Youtube instead. This strain is definitely promoting my interest in passive rather than active entertainment, but it is turning that passive activity of listening to dub into a mystical experience. You might prefer to use this if you are going to a concert, rather than performing at one. If you are going to listen to a dub reggae concert, then look no further.

**Thinking about old-school Thai also makes me nostalgic for the past. Because let’s be honest, it’s been forever since I had any righteous Thai bud. I occasionally see things labeled “Thai” today that look like regular old green sativa buds, which are probably nice, but NOT what I remember. I’m talking about a rich tasting, heady, golden brown weed that burned slow, like hash. I was just thinking, maybe I could can find some seeds in thirty-year-old album covers, plant them and eventually taste some quality brown herb again. There’s another throwback to the 80s I could approve of. Because, if I did have some, it would the most brilliant pairing with rich chocolate dessert, and I just found a pint of Coolhaus’ molten chocolate cake ice cream with at least an inch left at the bottom in my freezer.

But not to worry, because Blueberry Dome proves to be a versatile flower, and a fine pairing with chocolate stuff in its own right. After all that, I could probably use a gastro-protective, and indeed, despite all that abuse, my gut feels fine.

I understand… weed plus chocolate ice cream… how bad could it be, right? But sometimes, something you thought would be pretty good turns out to be EVEN BETTER than expected. And I love it when that happens.

This entry was posted in Cocktails, Beer, Wine & Weed. Bookmark the permalink.