‘Grey Nomad’ Hop Aboard for a Really Fun Ride 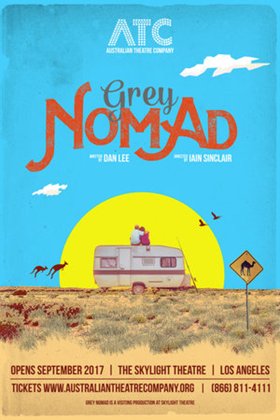 Australian playwright Dan Lee came up with the idea for “Grey Nomad,”  a couple of years ago. He was living in the Australian town of Boome and noticed that every year during the dry season, 15,000-60,000 baby boomers would descend upon the town in their R.V.’s. These are retired people who  have decided to spend the rest of their lives just travelling around the country.

When the play opens, we meet Helen (the excellent Ros Gentle), and her husband, Jim (David Ross Paterson) sitting on a beach. You know they are on a beach by their conversation. The set is comprised of only two, three or four chairs at a time and it’s the imagination of these talented actors that makes us believe each location.  Jim has waited his whole life to stop working and hit the road, where he could spend his days fishing, barbecuing, and camping. Helen, however, doesn’t share his enthusiasm. She misses her children and her life back home

Jim loves to talk and talk, but to Helen’s dismay, he’s  only interested in talking to her. It seems her hubby is extremely anti-social. That explains why he wants to hide from the couple they had met earlier. Helen, on the other hand, is much more open to meeting new people, and she’s about to get her wish. Running onto the stage comes this wild semi naked American woman, Val (Wendy Hammers), followed by her husband, Tim (Paul Tassone), who loves his body (perhaps even more than he loves his wife). Tim takes great pleasure in performing various yoga positions where he exposes his ‘family jewels.’

Throughout the play, the couples meet each other at different places, at a restaurant, in Val and Tim’s luxurious camper, and at a club where they’re having a wet tee shirt contest. It’s through Helen and Jim’s relationship with Val and Tim that they wind up discovering what is really important in life.

“Grey Nomad,’ directed by Iain Sinclair is not a perfect play. At times it’s hard to understand the actors dialogue because of their accents, but it is funny and touching, and a trip worth taking, especially for the baby boomer generation.

The play is presented by the Australian Theatre Company as a visiting production at the Skylight Theatre, 1816 1/2 North Vermont Avenue, Los Angeles CA 90027. Performances continue through October 8th on Mondays at 8pm, Fridays at 8pm, Saturdays at 5pm and 8:30pm and Sundays at 6pm. Tickets range from $39 (reserved seating) to $34 (general admission) Seniors (55+)$29. Purchase tickets here or call 866-811-4111.

Joan was born in Brooklyn and spent many years working as an actress in New York City. Even though she traveled extensively, Joan couldn't imagine living anywhere else.. Well one day, she met someone at a party who regaled her with stories about living in L. A. specifically Topanga Canyon. A few weeks later she found herself on an airplane bound for Los Angeles. Joan immediately fell in love with the town and has been living here for the last twenty years and yes, she even made it to Topanga Canyon, where she now resides, surrounded by nature, deer, owls and all kinds of extraordinary alien creatures.. Joan continued acting, but for the last several years (besides reviewing plays and film) she has been writing screenplays. Joan was married to a filmmaker who created the cult classic films, (way before she knew him) Faces of Death. As a result of his huge following, they created a funny movie review show entitled Two Jews on Film, where Joan and her husband, John would review movies and rate them with bagels You can see their reviews by going to youtube.com/twojewsonfilm. Although it's now only one Jew - Joan is occasionally joined by her beautiful Pekingnese and Japanese Chin.
View all posts by Joan Alperin →
This entry was posted in Theater and tagged 'Grey Noamad', Comedy, Skylight Theatre. Bookmark the permalink.