Patience Is A Virtue – Clapton At The Forum Part II 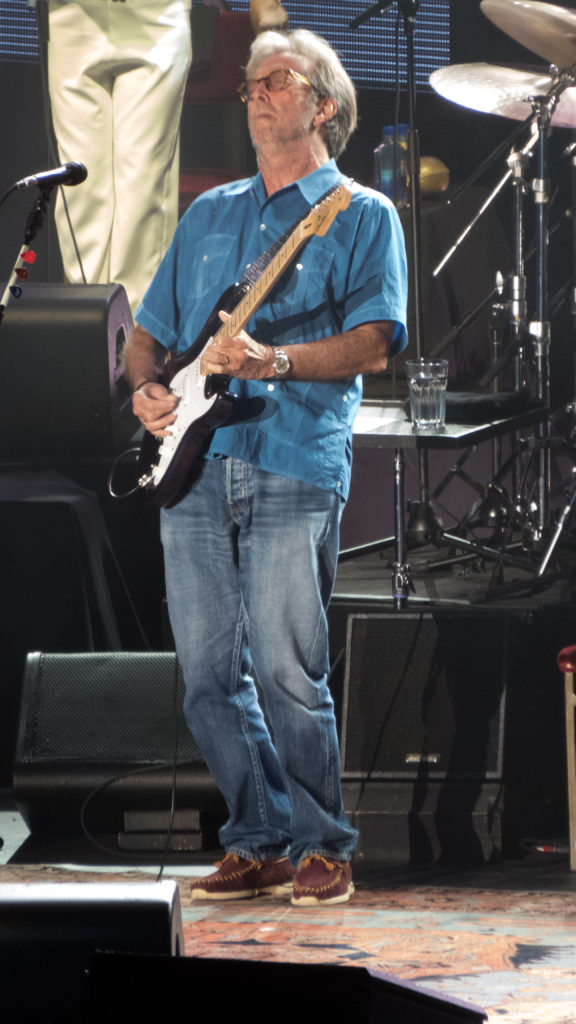 Sometimes it appears, the best IS saved for last. If you read my last post on Clapton, you know I walked away totally unimpressed with the show. I thought it sounded flat, and both Eric and the audience displayed no enthusiasm. So why did I return? Well, a couple of reasons. First off, I had originally purchased seats for a March concert, and that had been re-scheduled for last night, September 18th. After rescheduling the original show, two more were added, and I picked up a pair of killer seats for the Friday show. Now, maybe there’s some difference in sound between 15th row center, and section 106 at the Forum, because last night sounded great. Or maybe it’s just the way the sound guy worked the board. I can tell you that there’s not really ever a bad seat at the Forum. Comfortable, and great vantage points from anywhere in the house. Maybe next time I’ll save my money and sit up higher with the party crowd.

Last night’s Clapton was the Clapton I’ve always known. He came out with his usual “Good Evening” greeting to the fans, and proceeded to rip into number after number, switching to acoustic after about four songs. His acoustic set was also on fire. You could hear every single pluck of each string as though you were sitting in a room with him. He was totally engaged. He leaned into it, the way you’d lean into pushing a car up a driveway, with effort, and push, and determination. His solos soared off the ceiling and swooped back down, lifting the crowd back up to hang them there somewhere over the stage as he extended one bent note after another.

This was Clapton at his very best. There was no talk of any diminished abilities, slowed down numbers, or anything else that could be considered a criticism. Vintage Clapton, just being one with his guitar. Maybe the crowd also had something to do with it, maybe because this was one of the originally scheduled shows. The place was much more packed than Friday’s show, and the crowd got on its feet from the very beginning and stayed there. In contrast, Friday’s crowd remained seated during the entire show, at least they did down on the floors. Last night’s crowd was raucous, and exuberant, exactly like you’d expect. They cheered and screamed after every guitar solo, and I think they lifted Clapton up and held him there, and he responded in kind.

I am so glad that these two concerts happened in the order they did, because now I can remember Clapton as he was and still is; the king of guitar-based rock.

Ivor Levene likes to interview musicians, write about music and musicians, play music, listen to music, read about music, photograph musicians, and anything else you can think of with music. He has been involved with the music scene for over thirty years and his posts have appeared all over the place! Ivor says "I'm going to write about music as long as I have something to say".
View all posts by Ivor Levene →
This entry was posted in Miscellanious and tagged #clapton #ericclapton. Bookmark the permalink.