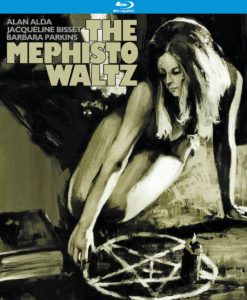 “The Mephisto Waltz” (1971) What draws concert pianist Curd Jurgens (“The Spy Who Loved Me”) to journalist Alan Alda isn’t his appreciation for the older man’s esteemed career, but rather, his hands – perfect for tackling difficult classical piano pieces, according to Jurgens, who encourages Alda to take another pass at his failed music career. But as Alda’s wife (Jacqueline Bisset) soon discovers, there is a more sinister motive behind Jurgens’ patronage, one involving occult rituals, soul transferral and ultimately, human sacrifice. In his informative commentary for the Blu-ray, historian Bill Cooke rightly describes “Mephisto” as 20th Century Fox’s bid for the box office take enjoyed by “Rosemary’s Baby” and other Satanic cinema titles of the late ’60s and early ’70s, and if it occasionally requires a score card to figure out which person is in possession of another’s soul (is that Jacqueline Bisset or Barbara Parkins?), the film – produced and directed by TV vets Quinn Martin and Paul Wendkos (“Brotherhood of the Bell“), respectively – has its share of unsettling images and an appropriate air of corrupted California affluence (epitomized by the use of the imposing, Gothic property at 380 S. San Rafael Avenue in Pasadena – better known as Stately Wayne Manor – as Jurgens’ home). Kino’s Blu-ray includes the original trailer and a second commentary by Pamelyn Ferdin, who played Alda and Bisset’s daughter. 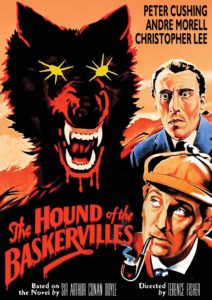 “The Hound of the Baskervilles” (1959) Hammer Films’ take on the oft-adapted Sherlock Holmes thriller, with Peter Cushing as the consulting detective, who investigates whether a family curse, involving a monstrous, ghostly dog, is responsible for the death of a wealthy landowner. Conservative Holmes fans may find fault with liberties taken by screenwriter Peter Bryan, most notably a greater emphasis on shock elements (appropriate for Hammer) and the transformation of the benevolent Miss Stapleton into hot-blooded, revenge-minded Cecile (Marla Landi), who vexes the current owner of Baskerville Hall, Sir Henry (Christopher Lee). But Terence Fisher (“Curse of Frankenstein”) provides brisk and uncluttered direction, and Cushing is a vigorous and eclectic Holmes (an avowed fan, the actor added minor but colorful details taken directly from Arthur Conan Doyle’s text to his performance) that presages subsequent screen Holmes, including Jeremy Brett and Benedict Cumberbatch. These elements, along with the presence of Lee (in a rare vulnerable turn) and Andre Morell as a dependable Dr. Watson, do much to smooth over the occasional stumble (like the non-threatening Hound); the DVD includes the original U.S. theatrical trailer with “Trailers from Hell” commentary by Joe Dante, as well as a brief but conversation with Lee about Hammer, his longtime friend Cushing, and his own experiences playing Holmes.

“The Skull” (1965) Occult artifact collector Peter Cushing ignores a warning from Christopher Lee (first mistake) about his latest acquisition – the alleged skull of the Marquis de Sade – and falls under its sinister sway. British supernatural thriller is buoyed by its two leads (though Lee, billed as a guest star, has limited screen time) and Oscar-winning cinematographer turned director Freddie Francis‘s attempts to flesh out the script (no pun intended) by producer Milton Subotsky, which is based on a very short story by Robert Bloch of “Psycho” fame. These include a silent and effective nightmare sequence in which a phantom court sentences Cushing to death, and POV shots of various victims glimpsed through the eye sockets of the skull. Though this production by Amicus can’t match Hammer titles from the period, or some of its own better efforts (e.g., 1972’s “Tales from the Crypt”), for thrills or atmosphere, “The Skull” remains a modest repast of visual comfort food for monster kids of a certain age. Kino’s Blu-ray includes a wealth of information on the film, its studio and participants from commentary by historian Tim Lucas and interviews with writers Jonathan Rigby and the great Kim Newman. 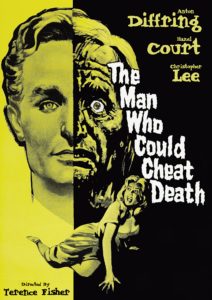 “The Man Who Could Cheat Death” (1959) One hundred and four years is a long time to do anything, but 19th scientist Anton Diffring (“Circus of Horrors”) has maintained his career, his icy good looks and a side gig as a sculptor for exactly that length of time. His secret: regular gland transplants (gulp), chased with a glowing green liquid that wards off age, if not the occasional lapse into homicidal mania. Minor Hammer adaptation of “The Man in Half-Moon Street,” a straightforward fantasy-romance by screenwriter Barre Lyndon (“The Lodger“) that was filmed in 1944; scripter Jimmy Sangster (“Horror of Dracula”) and director Terence Fisher add some grue (Diffring turns a ghastly green when he needs a new gland) to the proceedings, but there’s a lot of talk and not much action, and Diffring is a lightweight substitute for Peter Cushing, who was initially slated as the lead. Still, Hammer devotees will appreciate the presence of studio players Hazel Court and Christopher Lee as Diffring’s paramour and rival, respectively, and an appropriate dark mood is set by Hammer vet Jack (“Hound of the Baskervilles”) Asher‘s photography and music from Richard Bennett,; Kino’s Blu-ray also features interviews with Newman (who highlights parallels with “The Portrait of Dorian Gray”) and Rigby, with commentary handled here by Troy Howarth; the disc also features the Joe Dante/”Skull” entry from “Trailers from Hell” and a raft of UK horror trailers from Kino’s library.

“Z.P.G. (Zero Population Growth)” (1972) Glum futureshock nightmare set in a 21st century where pollution and overcrowding have led to a global ban on new births; Oliver Reed and Geraldine (daughter of Charlie) Chaplin‘s decision to have a child in secret makes them a target for state-sanctioned child abductors and even their own friends and neighbors. Director Michael Campus (“The Mack”) conjures up a few unsettling images, like the hideous robotic substitute children (created by Derek Meddings, who designed special effects for Hammer, the James Bond series and Pink Floyd) afforded to couples by the government and a museum filled with extinct domestic animals, and benefits from appropriately sterile and bleak set design – in his commentary, Steve Ryfle rightly points out passing similarities between the cities in “Z.P.G.” and “Blade Runner” – but the picture runs out of creative steam once Reed and Chaplin make their escape. Kino’s Blu-ray includes trailers for other science fiction and dystopian films, including “The Satan Bug” and “Chosen Survivors.”

Paul Gaita lives in Sherman Oaks, California with his lovely wife and daughter. He has written for The Los Angeles Times, LA Weekly, Variety and The Fix, among many other publications, and was a home video reviewer for Amazon.com from 1998 to 2014. He has interviewed countless entertainment figures from both the A and Z lists, but his favorites remain Elmore Leonard, Ray Bradbury and George Newall, who created both Schoolhouse Rock and the Hai Karate aftershave commercials. He once shared a Thanksgiving dinner with celebrity astrologer Joyce Jillson, and regrettably, still owes the late character actor Charles Napier a dollar.
View all posts by Paul Gaita →
This entry was posted in Movies and tagged Kino Lorber. Bookmark the permalink.

One Response to Movies Till Dawn: Spotlight on Kino Lorber (Cold Chills for a Long, Hot Weekend Edition)