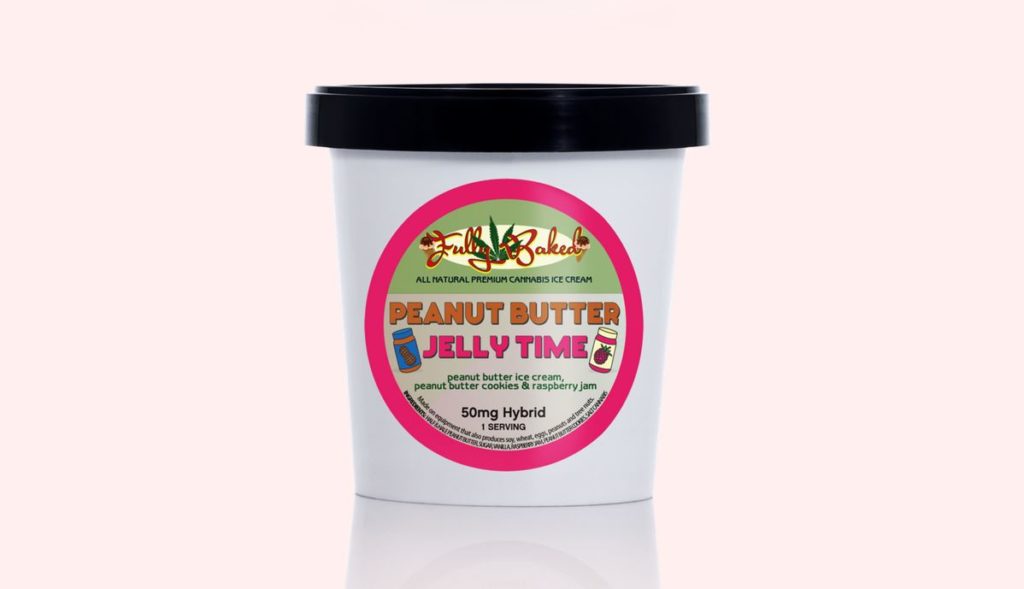 While I consider myself a general enthusiast for marijuana products, I’ve not always had a great relationship with edibles. I acknowledge that not all things are made for all people, but seeing the variety of tasty-looking products coming to market now, I would still like to find one that works for me. And until that time comes, I’m willing to try new things once in a while, in the spirit of open-mindedness. When I encountered Fully Baked Ice Cream at a grass event on a balmy summer night in LA, I decided it was time for just such an experiment.

The enticing list of flavors – Vanilla Kush, Fudge You, Peanut Butter Jelly Time, and Coffee Pot ice creams plus a Berries & Bud sorbet – made the very idea of selection difficult. After sampling the Fudge You and finding it highly craveable, I found a way for single-serve containers of all five flavors, each one measured at 50g of THC, to be in my freezer on a sunny afternoon when I had plenty of time to devote to their evaluation.

Evaluated purely as food products, I give Fully Baked high marks for their artisanal ice cream making. Yes, there is a distinct note of “weed” present in the flavor profile, prominent in some (vanilla), barely noticeable in others (coffee, berry sorbet). But it’s a mild, somewhat citrusy hit, not off-putting or overwhelming. All the flavors are pleasantly creamy, and beautifully flavored. The chosen five varieties are well balanced, clever, and work well in concert with the core product.

There is definitely something that connects the flavors of peanut butter and jelly with stoned eating in the collective mind, which makes that flavor particularly satisfying. This columnist believes that the recent rise of the lowly PB&J as a high class foodie item is directly connected with the legalization of weed. It appeals not only due to the complexity of sweet and salty flavors juxtaposed, but because of its suggestion of childhood, the good part of it, and how simple pleasures were like God’s gift to an innocent child. I swear if you have ever made yourself a PB&J stoned in the middle of the night, or the middle of the morning even, you know what I’m talking about. This ice cream re-creates that state of mind by anticipating it. A neat trick, well done.

I estimate my own dose for eating herb at just a wee bit north of 50mg, so I figured for a first sitting, I’d eat a spoonful from each variety, and finish the container of my favorite. This turned out to be the Fudge You, which contained chocolate-covered frozen banana chunks in velvety chocolate ice cream. I’d buy it at the grocery store, regardless of its medicinal value.

I can definitely report that this ice cream did what other high grade, high dose edibles do for me. I was high as a kite for about forty-five minutes, and then went to bed at least an hour earlier than would be considered normal, maybe two. I did sleep soundly that night, but for some reason I kept thinking about the classic animated film Allegro Non Troppo, re-playing its individual cartoons of classical music masterpieces in my head, as I lay around trying to nod off. Why that movie, which I’ve loved since I was a kid but haven’t watched or thought about in years, I don’t know.

Oh yeah… I know! It was that wistfulness of childhood thing I was talking about earlier. Once you experience it vicariously via PB&J weed ice cream, it opens the door to other things you thought were cool as a child. Those things can then bubble up unexpectedly if you’re open to them, like a child would be. Some famous chef is probably working on how to make a high grade, medicated Fluffernutter and mass produce it, but until that day, this here ice cream will work fine. In fact, it works much better for me because I couldn’t stand Fluffernutters.

I don’t know why I just tried to wish a non-existent Weed Fluffernutter into existence. Maybe that’s evidence that the marijuana used in its creation was a sativa, with its energetic, “creative” properties.

If you are someone who enjoys edibles, then I have no problem recommending this product. It’s delicious and gets you good and high, like fine wine and 19 year old Scotch. But it also may hold the key to something childlike, making it an honest to goodness special event. Cream on, sweet cream babies.

This entry was posted in Food. Bookmark the permalink.