LALS Ghost Train: Back on Track with Ghoulish Delight 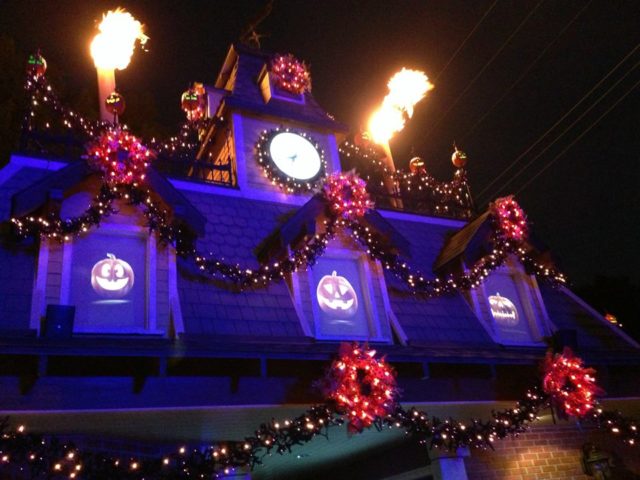 Last October a scary thing happened. The annual Ghost Train built and run by the Los Angeles Live Steamers (LALS) pronounced the popular attraction dead on the tracks and announced it would forever go dark. Many lovers of the playfully haunted locomotives felt sucker-punched with the news and wobbled as if someone had told them that Christmas was cancelled, Sacks of mail from the community were delivered to the property adjacent to Travel Town begging to let their children see the friendly ghosts that were way cooler than Casper one last time, but it was all for nought. The decision to put the last nail in the coffin of the whimsical miniature trains stood firm. 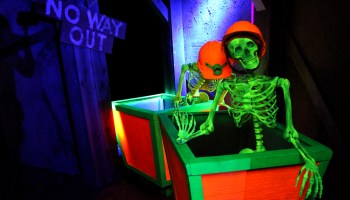 After a year of continued letters offering to help to revive the 16 year old attraction and fund raiser, the true spirit of “Never Give Up The Crypt’ came through. The Seventh and a Quarter-inch gauge steam powered choo choos are once again taking Halloween lovers on a slow and dark ride of seasonal phantasmagoria. I haven’t been this excited since I ran into Lon Chaney Jr. as a kid, and later Vincent Price as a teen.

Before I express my views on its return, let’s set the record (or spine) straight and find out the reason it went dark. The short story is that many of the club members got burnt out on the event, and on each successive year it would grow, necessitating out side help, which could be tricky sometimes since everything is done by volunteers. The other reason that it was voted to be nixed was that there is so much damaged infrastructure — like bridge supports and air vents and water mains caused by the heavy traffic that comes with the annual ghost train. In other words, it was doing as much harm as it was good with its fund raising for the approaching year. Los Angeles is mad about Halloween and love it’s great parks. so the good and bad of the situation saw long sell out lines every year. It gave LALS  money for repairs, but put great stress on the tracks. 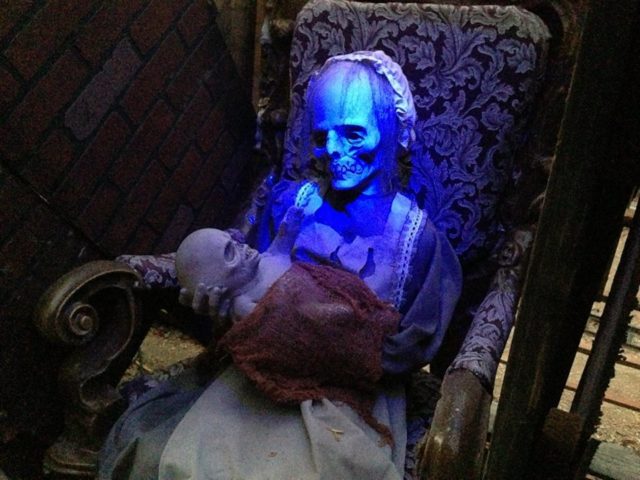 The Man (or maybe necromancer) in charge of breathing new blood into these mini iron horses (or iron hearses, if you will) is Gary Baker, a man of many talents with a great sense of community. Gary has had a passion for the spooky ever since he was a wee spirit. At the age of eight, he was running a charity haunted house and carnival in his backyard. His love of trains easily matched his passion for haunting. His grandparents had an auto store and in the back were Lionel trains, so visiting was a double win. Today Gary is a master of the four C’s: Communication, Courage and Cinematic Creepiness. He was one of the originators of Scare L.A., and then broke off to helm his own phantom ship named Midsummer Scream, a convention for serious haunters who want to get an early start and plan a masterpiece of their own with products and installations from various sources. It Takes place on the last weekend of July. I was there this year. It was mega cool.

On to this year’s revival. Although some tots five and under may be spooked by the open air excursion into a Nightmare Before Christmas-type of environments, it’s basically very family-friendly and focuses on the antics of skeletons much like the sadly defunct Boney Island in Burbank., Expect hearty pirate skeletons, skeleton gold miners, skeleton mariachis and a flatulent bonehead forever making sound effects to the song Moon River. Perhaps not every parent’s choice of humor, but the kids all howl every time they pass by. The mile-plus track also includes a large selection of inflatables and ghostly projections. Our favorite part for me and my gal are the rabid raccoons rattling through the trash cans. They are just so cute! In short, even though a few damaged set pieces didn’t make it back, the train has made a grand comeback and the twenty-minute slow ride for a twenty dollar donation is worth the price. You won’t see anything like it outside of Disneyland.

WIll the train be returning from the netherworld next year? The spirits and the conductors have not decided yet, so plan your next weekends plus Oct 30th and 31st to make a visit to 5202 Zoo Drive, Los Angeles 90027 from the hours of 7:00 p.m. to 10:00 p.m. no one will be turned away if they are in line between those hours. On select nights silly Monster Mash type rockers, The Rhythm Coffin inspire the tots to twist and do the Graveyard Stomp.

I’d like to personally thank Gary Baker, Diana Manchester and all of the Steamer volunteers for their graciousness and hard work in assisting this article and for returning to L.A. a grand tradition in the name of spooky fun.

Dukey Flyswatter, (AKA Michael), is a native Angeleno with strong roots in the underground scene since the 70's. He is a screenwriter (Blood Diner, Star Slammer), actor(Surf Nazis Must Die, Betty Page:Dark Angel, etc.), freelance writer. He is best known for his Horror Metal rock group, Haunted Garage, which he founded in the 80's and has now reformed, with him taking his usual role as lyricist and singer.
View all posts by Dukey Flyswatter →
This entry was posted in Attractions and tagged dukey flyswatter, Ghost Town, Griffith Park, Halloween, Los Angeles, The Los Angeles Steamers Railroad, Travel Town. Bookmark the permalink.

One Response to LALS Ghost Train: Back on Track with Ghoulish Delight