Interview: From The Dils to Ford Madox Ford, Chip Kinman is Keeping it Real 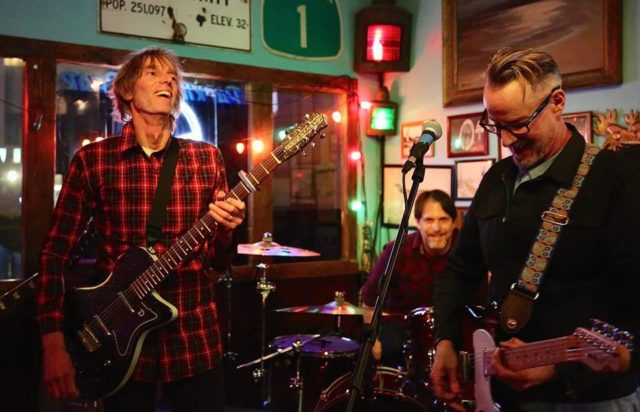 Tony and Chip with FMF (Courtesy of Chip Kinman) 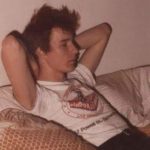 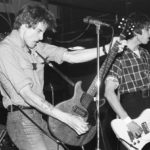 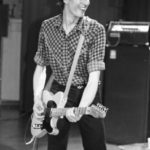 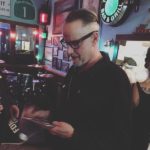 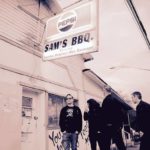 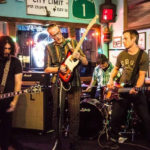 By Andy Nystrom. Originally posted in There’s Something Hard in There

Be real. Be honest. Be glad you weren’t a fuck-up.

Those are words of wisdom that Chip Kinman has to offer at age 60 while reminiscing about his uncompromising past and present musical efforts — which tread both rambunctious and tamer paths — and his live-to-the-fullest existence.

On a recent Sunday morning from the confines of his home in Burbank, Calif., Kinman’s voice shot out over the phone with edgy and passionate sparks and feelings that placed you right alongside the man on his journey through The Dils, Rank and File, Blackbird, Cowboy Nation — and now his punk-rocked blues outfit Ford Madox Ford.

After taking some time off from playing in a serious band and to get married, Kinman returned with Ford Madox Ford in 2016.

“It feels really good. It’s an interesting point in life. (Brother) Tony and I, we’ve never been like the reunion kind of guys. I don’t think anyone who listened to The Dils said, ‘Man, I can’t wait til these guys are 70, this shit’s gonna be really good.’ Man, I just can’t imagine that,” he added with infectious laughter.

So, the guitarist/vocalist has started anew with Ford Madox Ford — which recently released its debut album, “This American Blues,” on Porterhouse Records  — and he’s just as fired up as ever, especially since he feels he’s still got something to offer.

Although Tony is not a member of the band with his younger brother like was in the Kinmans’ former groups, he contributed to the album in the producer’s role.

“It’s OK not having him on stage. I know he’s there in spirit and I always kind of carry that around with me. I just can’t discard the Chip-and-Tony thing, and plus I’ve still got a relative in the band, Dewey Peek is my son, so it’s still a family affair,” Chip said of the 21-year-old guitarist. The band also includes S. Scott Aguero on drums and Matt Littell on bass.

Throughout their career, the Kinmans delved into songs in the punk, country, synth-noise and cowboy veins, and now the blues are in Chip’s blood.

“I don’t think the record is necessarily unprecedented, like it’s a whole new direction of the blues, but it’s real, it’s good, and I think I’ve carved out my own little space,” he said. “Just to do it is rewarding, whatever happens after you do it that’s completely out of my hands.”

It’s an autobiographical record and Kinman hopes a song like “Dark American Night” can connect with listeners, “cuz it’s kind of about America at the crossroads, certainly where we’re at.”

He added about his songwriting process:

“I try to keep it succinct and to the point, because if you’re gonna be writing about your life, you better have a fucking interesting life. If you want anyone to listen to it. So a lot of it really came from the inside — I dug down deep to make the record. It may be a flop, but it won’t be a failure.”

Kinman stressed that he didn’t want to make a record that sounded like an old guy trying to recapture his past. The Carlsbad, Calif., native feels he’s successfully continued his musical movement from the early days to the present with Ford Madox Ford.

Although it must be odd for Peek to be playing in a band with his dad, Kinman said that it’s strengthened their relationship and he’s glad to have welcomed his smart and talented son into the fold.

“Because he’s a great player, because he has good instincts, that’s why he’s there. I’m not trying to just give him a handout. I believe in him, I believe what he’s brought to the band is good and important. I’m really proud of him,” Kinman said of Peek.

Kinman said the other guys are fun to be around, too, as is evidenced in their gigs and a cross-Canada tour — which began with a grueling but laughter-filled drive from Burbank to Montreal — last summer.

Peek has added a dose of humor to the situation with Kinman forming this new band 60 years into his life and 41 years after The Dils blasted their political punk onto the scene.

“He calls all the old-guy bands ‘black T-shirt bands.’ And I really didn’t wanna make the ‘black T-shirt band’ record, cuz I’ve heard some contemporary… and I won’t bother to name… but it just sounds like, ‘Well, you’re kind of trying to play like you used to, but you’re kind of not doing it, so what’s the point, you know?’ Do something real, and that’s what I do,” Kinman said.

That’s not to say that he’s not giving a nod to the bands that influenced him during his life. Groups like the Who, New York Dolls and others are part of his lyrical reference points that crept into the record with the line, “The kids are absolutely not alright,” and on the song “Images of My Generation.”

Kinman’s having a blast playing shows, reconnecting with people and sharing stages with old friends like the Dream Syndicate and newer bands.

“Plus, I still love turning that amp up and going for it,” he said.

Tony was an invaluable wizard in helping the guys put the album together and he’s even played a song or two with them at gigs.

“Tony’s got great ears and he’s really smart and he’s got a really clear vision. He was able to get to the real performance. Tony’s always been brutally honest with me: one of his most famous quotes is, at rehearsal once, we played a song, and he said, ‘Well, Chip, that was pretty good, now make it sound like music.’ Oh, my god,” Chip said, laughing away again, and adding that after Peek laid down 15 guitar tracks, Tony would remember exactly where the top ones were on the tape that best connected with the song and implemented them into the Ford Madox Ford musical landscape.

So what about the band name? Kinman has never read the English novelist’s books (he lived from 1873-1939), but saw him unkindly mentioned while he was reading Ernest Hemingway’s “A Moveable Feast.”

“That’s a fucking cool name, who names their kid Ford Ford?” he said. “It just kind of stuck with me and when it came time to name the band, in the grand tradition of bands named after people, there it is, Ford Madox Ford.”

I noted that it’s almost guaranteed that no band will ever double up on that moniker, so they’re solid in that department, as we both chuckled.

KINMAN DUO AND THEIR MUSICAL TREK

From “I Hate the Rich” with The Dils to “Amanda Ruth” with Rank and File and beyond, the Kinmans have dug their hands into copious musical styles.

They’ve also maintained a tight relationship that would make most brother bandmates envious. Their musical and personal trek is far from perfect, but it’s been, well, real and honest (certainly worth a repeat mention in this context).

“We’ve had our ups and downs — a few guitar smashes over each other’s heads, that sort of thing (laughs), but nothing too radical,” Chip said. “Cuz we had a vision and we really enjoy playing with each other, so our relationship’s always been good. Nothing really weird, no weird Everly Brothers stuff or those guys in Oasis. We’ve always been close.”

On growing up in Carlsbad:

“Before we started playing music together, of course I was always his little brother, you know he kind of didn’t want anything to do with me. But when we started playing music, he realized in Carlsbad there was really only like 4 or 5 people who liked the same kind of music — who liked David Bowie and the New York Dolls and the Velvet Underground — so we kind of gravitated toward each other. We weren’t into Deep Purple, Led Zeppelin, Steely Dan and that bullshit.”

“With The Dils, it was full speed ahead (like other punk bands), it was a lifestyle, that’s all we did. You woke up, it wasn’t like I’m gonna wake up and I’m not in The Dils until I go to rehearsal, I’m not in The Dils until I go to a show. You woke up and you’re in The Dils. We lived in San Francisco, so it was really easy to have the feeling of revolution inside you — musical, cultural and otherwise. Everything was new: the smell of roasting coffee was new, pesto was new, beatniks and poets who still lived in North Beach, that was new, Chinatown, all of that was new and all of that added to the sense of (cultural) revolution, like moving forward and this is real and I’m a young man and this is what I’m supposed to be doing. And that gave everything a real sense of urgency, a real sense of getting it done. And that lasted us for about a thousand nights, about three years and that was it. You always gotta know when to leave the party, and that’s the trick.”

After Tony decided to cease playing music, Chip moved to New York and started Rank and File. They soon moved to Austin, Texas, in 1980 and got Tony back in the game as their bassist.

“It was kind of the same thing, we were on a mission and we decided well, let’s play country music. We heard a radicalness in Merle Haggard and Lefty Frizzell and Waylon Jennings that really appealed to our musical radicalness,” he said.

They felt Austin was a good place to incubate, at first.

“We were welcomed with open arms and then were asked to get out of town,” said Chip, noting that the Austin punk scene was very insular, and to the hardcore set, country music was the enemy, wasn’t hip. “So we had a bit of a struggle, and luckily, a couple things went our way and we ended up on Slash Records.”

They fought through some adversity to carve their own identity and reap success: “It was something different and something that set us apart, and Tony and I were always about that.”

After Rank and File ran its course, the Kinmans started Blackbird, a two-member noise band with machines. Chip recalls a Los Angeles Times writer scribbling that Blackbird was either genius music or career suicide.

It turned out to be a bit of both, Chip said, adding, “Blackbird was a lot of fun, it was super loud — it was such a barrage of noise and sound.”

Cowboy Nation was next on their plate, an acoustic band with a snareless drummer. It was serious cowboy music in the John Ford vein. No fancy outfits or three-part harmonies necessary.

All Chip’s bands have been fun and important to him and others at the time, he said.

And now, we’re in the here and now, with Chip happily blazing away with Ford Madox Ford and welding his past and present together.

Kinman said he’s acquired some wisdom over the decades and sees his life in the fullness of time.

If you can firmly grab “everything you do — your relationships and your passion, if that happens to be music or whatever, writing blogs, then you can always hold your head up.”

This entry was posted in Interviews, Music. Bookmark the permalink.