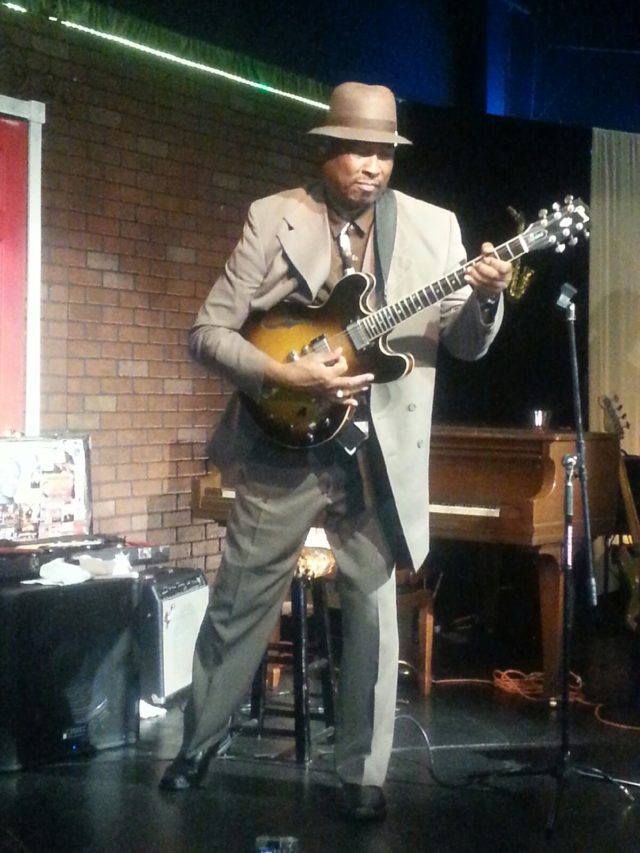 Chef Dell was the Champion of the Food Network’s Chopped: Cook Your Butt Off competition and a contestant on Cutthroat Kitchen; while Chef Character competed on both BBQ Pit Wars and BBQ Pitmasters on the Destination America Channel. The main event, the KCBS (Kansas City Barbecue Society) sanctioned BBQ competition, takes place on Saturday, June 2, 2018, along with the BBQ Throwdown between Chef Character and Chef Dell.

The Horse Town Brew n Que Festival will also feature some great live blues music on Saturday from Lucky Lloyd. Lloyd will be bringing a great band to perform at the festival. Lloyd grew up in Detroit, but has called Los Angeles home for many years now. A master of the blues guitar, when he’s not on tour with many great R&B and blues artists, Lloyd plays locally from his home turf in the San Fernando Valley down through the South Bay. Lloyd talked with the Los Angles Beat today about the blues, the Horse Town Brew and Que Festival and his life in music.

Q: Growing up in Detroit, did you always want to play music and become a performer?

A: Well it kind of just happened, my dad introduced me to it. He pushed me to play, like it or not—I didn’t like discipline too much. But it kind of just happened. And once I got into it I started to like it. It became a habit. I never thought about being a performer, but my father had some friends that had a band that would come over and play in the backyard, so it was very attractive. I didn’t know at the time that I wanted to be a performer, but I liked what they were doing. My father bought me a guitar and started making me practice. And that’s how it started to develop for me. As a kid growing up, you want to play, but I would practice even though it — I wasn’t sure if I even liked it then — it didn’t really happen for me until I got a little older and I knew that people liked it when people played music. I started playing with a band called the Blackstones back in Detroit as a young teenager, at the age of fourteen or fifteen, and it really started to develop then.

Q: Besides your own groups, you’ve played with many well-known artists. Any particular ones stand out? 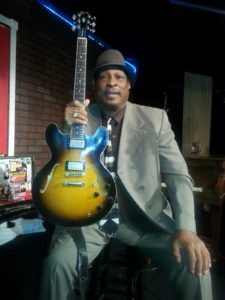 A: Yes, yes. I’ve played with some really fantastic artists. A lot of people don’t know much about Mister Jerry Williams, aka Swamp Dogg. Tracy Bird, Kid Rock. Irma Thomas — even did an album with the Jackson Five back in the day. I’ve played with people like Brenton Wood. Who’s got a lot of big hits. It’s funny, a lot of the black community didn’t know a lot about Brenton Wood. He had that big hit, “Give Me Some Kind of Sign.” I’ve toured with great blues artists like Little Milton, who was a fantastic blues artist. Bobby Warren, many others — the great Sonny Green out of Los Angeles. The Soul Brother — those are some unsung heroes. A lot of great blues artists out there — the great JJ ‘Bad Boy’ Jones, one of the first artists that I played with in Los Angeles. That was really really fantastic. I wanted to play with BB King—I almost had the opportunity to play with BB King, but it didn’t happen.

But he was one of my idols, I learned to play his style early in my career when I started to develop; and Albert King, those guys were my heroes, I was really tuned into those kind of guys. There were really a lot of great artists and I toured with some really good people — Brenda Holloway, she’s a great Motown artist. And so many more I can’t name! I’ve been blessed to work with a lot of nice people.

A: Most definitely, most definitely. I’m looking forward to eating barbeque! It’s always a blessing when you can transmit something that you think people will like, and I think they will really like the BB King style the way I play. I’m going to have some great players with me on that show. I’m going to have the fantastic keyboard player for Rose Royce, Norman Weatherly. We have James Brown’s former bass player for the last ten years, Willie Ray Brundige, the fantastic LA drummer, Dave Odem and the fantastic Tina Michaels. I wanted to bring a woman with me to give a little bit of a variety with the blues from a woman’s side. It’s going to be pretty good! I’m looking forward to doing a good job. And my old friend Ronnie Stewart introduced us and now it’s happening.

Most of the guys that are cooking at this festival are on TV. I was shocked about that, surprised! I watch the Food Network a lot and I’m excited to do it!

Q: Thanks, Lucky! I know it’s going to be a great show!

The Horse Town Brew n’ Que Festival will feature great barbeque, a wide choice of craft beers and a lineup of excellent music. Saturday, the competition day, will also have a wide variety of food and barbeque vendors. There is also a Kid’s Que event on Saturday. Friday’s Meat and Greet Reception will have food as well as a chance to meet both Chef Dell and Chef Character. On Sunday, a limited amount of people will be able to attend the Table Captain and Judge’s classes to qualify as official KCBS Certified BBQ Judges and Table Captains.

The event, held at the George Ingalls Equestrian Center in Norco, has plenty of parking. If you decide you’d rather ride your horse to the event, there are also plenty of trails as well as hitching posts for your horse at the Center. The event is less than a two-hour drive from Downtown Los Angeles. On the event website, there are also links to local lodging for the Horse Town Brew n’ Que Festival.

When The Los Angeles Beat covered the inaugural Horse Town Brew n’ Que Festival, it quickly proved to be an awesome event. With BBQ legends Myron Mixon and Big Moe Cason, it got off to a great start.

This year, Chef Dell and Chef Character will bring the same energy to the Throwdown, while many of the nation’s top barbeque pitmasters and teams compete for awards in pork, chicken, brisket and ribs. The Horse Town Brew n’ Que Festival is a barbeque event that is not to be missed.

Ed is a native of Los Angeles who loves food and food cultures. Whether he's looking for the best ceviche in Colombia, the best poke in Hawaii, the best tequila in Jalisco or the best Taiwanese Beef Roll in Los Angeles, it's all good food! He also loves a good drink. He's had Mai Tais in Hawaii, Bourbon in Kentucky, Tequila in Mexico and Rum in Jamaica. His wine escapades have taken him to Napa, Sonoma, the Willamette Valley and the Santa Ynez Valley. And he's had beer all over the world! Music is another of Ed's passion, writing and interviewing many classic rock, rock and blues musicians. Getting the great stories of road experiences from them is a particular delight. Traveling also fits in with Ed's writing, exploring all over to find the most interesting places to visit, even in out of the way areas.
View all posts by Ed Simon →
This entry was posted in Food, Interviews, Upcoming Events and tagged barbeque, Blues, blues guitar, Horse Town Brew n' Que Festival, Lucky Lloyd, Norco. Bookmark the permalink.