Movies Till Dawn: What You Could Be Watching This Weekend (Cards on the Table Edition) 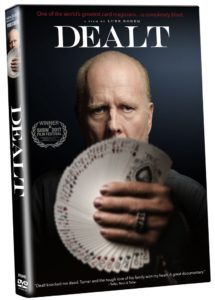 “Dealt” (2017, MPI) While the subject of this documentary, Richard Turner, would prefer that you call him a mechanic and not magician, there’s nothing workaday about his sleight-of-hand with cards, which is astonishing and made even more so because Turner is completely blind. How he developed his talents in spite of his condition is a component of Luke Korem’s documentary, which won the Audience Award at the 2017 SXSW Festival, but its broader focus is Turner’s relationship with not only his limitations, which he seems to regards as a competitor to master through sheer force of will – hence his obsessive relentless practice with cards and efforts to earn a black belt, shoot a gun and other tasks seemingly out of reach of the blind – but also his family, which includes his infinitely patient wife and son (named Asa Spades), upon whom he must rely (begrudgingly) for assistance with basic tasks. Korem isn’t afraid to paint Turner’s approach to life as both a marvel and a challenge to others, which makes for a more complex portrait than what is usually put forth in documentaries about overcoming adversity; MPI’s DVD includes deleted scenes and a short but eye-popping featurette on card mechanics like Turner. 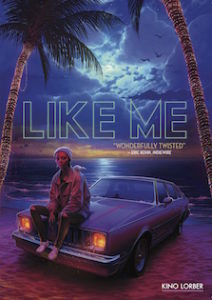 “Like Me” (2017, Kino Lorber) Blank-faced Addison Timlin records a series of assaults on strangers and posts them to social media, where she attracts a following, as well as a smug troll (Ian Nelson) who pushes her to top her previous efforts with the help (more or less) of a dissolute hotel manager (co-producer Larry Fessenden). What sounds like a slog through extreme horror territory instead unfolds as a caffeinated meditation on the most toxic aspects of online culture; writer-director Robert Mockler digs deeply into the video art/experimental style playbook (staccato editing, searing color palettes) to illustrate both his heroine’s derealized perspective and the internet’s ADHD mindset. It makes for exciting if disorienting viewing, and Timlin is terrifying as a smiling monster crafted from the worst aspects of Snapchat, YouTube, et al. Kino’s Blu-ray includes a making-of featurette. 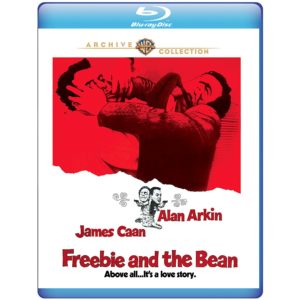 “Freebie and the Bean” (1974, Warner Archive Collection) An investigation into gangster Jack Kruschen by San Francisco cops James Caan – dubbed “Freebie” because of his mooch tendencies, and Alan Arkin, known as “the Bean” because he was born in Mexico (yes, I know) – appears to consist of endless bickering with their wives (Linda Marsh and Valerie Harper, respectively), fistfights with each other in public, and the destruction of numerous cars and at at least one major piece of property. You’ll either find Richard (“The Stunt Man”) Rush‘s dummy-buddy cop comedy jaw-droppingly stupid and offensive or hilarious – there’s no half-stepping – but if you’re among the latter camp, you’ll appreciate the jittery, largely improvised banter between the leads and Rush’s no-holds-barred stunt set pieces, the most memorable of which details what happens when a car is launched off the Embarcadero and into an apartment. You also can’t argue that for better or worse, “Freebie” has influenced every crash-happy cop comedy that followed in its wake. Warner’s Blu-ray includes the original trailer. 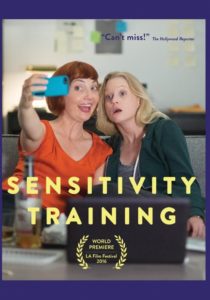 “Sensitivity Training” (2016, Random Media) Fitfully amusing indie comedy, which debuted at the 2016 Los Angeles Film Festival, pits a brilliant but disagreeable scientist (Anna Lise Philips) against the impossibly upbeat sensitivity coach (Jill Alexander) hired to adjust her attitude and help her earn a research grant. The two leads deliver writer-director Melissa Finnell’s biting dialogue (which earned a Samuel Goldwyn Writing Award) with speed and finesse, but the lines can’t do much to elevate their oil-and-water interactions beyond sitcom material; still, it’s always a pleasure to see a female-led comedy that’s focused on their relationship and not on meeting a man, and there’s solid support from pros like Amy Madigan and Charles Haid, who play Phillips’ equally abrasive parents. 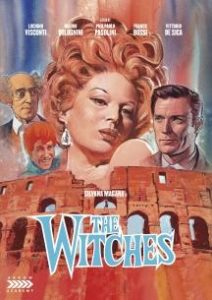 “The Witches” (1966, Arrow Video) Producer Dino De Laurentiis employs a cross-section of Italy’s most acclaimed arthouse directors, including Luchino Visconti, Pier Paolo Pasolini and Vittorio De Sica, attempt to understand the modern (mid-’60s) woman, with De Laurentiis’s then-wife, actress Silvana Mangano, as their muse/guide. Told in anthology format, the segments range from arch social commentary (Visconti’s “The Witch Burnt Alive”) to surreal comedy (Pasolini’s “The Earth Seen from the Moon,” with Toto and Ninetto Davoli as a clownish father-and-son seeking a new spouse for the older man) and satiric Pop Art in De Sica’s “An Evening Like The Others,” with bored housewife Mangano envisioning her staid husband (Clint Eastwood, between Sergio Leone assignments) as various film and comic book heroes to ward off their marriage doldrums. There are flashes of substances along the way, particularly in the Visconti segment, but for the most part, “The Witches” is a breezy confection made substantial by an incredible cross-section of European talent (including Annie Girardot, Francisco Rabal, Alberto Sordi and Helmut Berger) and a brassy jazz-pop score by Piero Piccioni (for four segments) and Ennio Morricone delivering the mandolin-driven music for Pasolini’s contribution. Arrow’s Blu-ray includes both the Italian and (shorter, dubbed) English-language versions of the film, as well as commentary by Tim Lucas, who does a typically fine job of providing background and perspective on all the major players and other Italian anthology films from the period.

Paul Gaita lives in Sherman Oaks, California with his lovely wife and daughter. He has written for The Los Angeles Times, LA Weekly, Variety and The Fix, among many other publications, and was a home video reviewer for Amazon.com from 1998 to 2014. He has interviewed countless entertainment figures from both the A and Z lists, but his favorites remain Elmore Leonard, Ray Bradbury and George Newall, who created both Schoolhouse Rock and the Hai Karate aftershave commercials. He once shared a Thanksgiving dinner with celebrity astrologer Joyce Jillson, and regrettably, still owes the late character actor Charles Napier a dollar.
View all posts by Paul Gaita →
This entry was posted in Movies and tagged Arrow Video, Kino Lorber, MPI, Random Media, Warner Archive Collection. Bookmark the permalink.