Arroyo Seco Weekend: The Food – The Fun – The Frolic 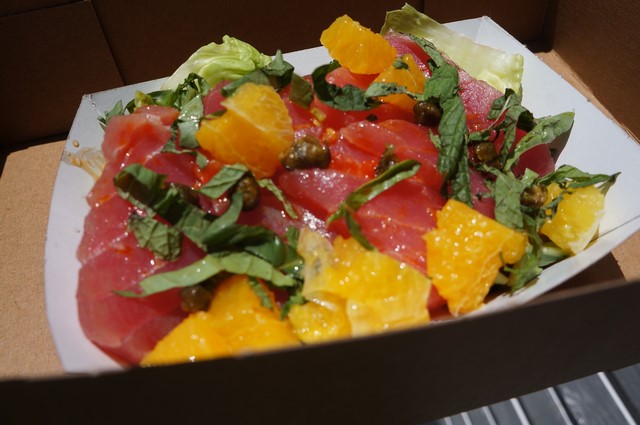 Fish but not THAT Phish from Cal Mare. Photo by Elise Thompson.

I can’t believe I have been going to the Rose Bowl for my entire life and I never knew about the acres and acres of verdant grass gently sloping behind it. The enormous Brookside golf course was repurposed into festival grounds as well as parking lots for the Arroyo Seco Weekend The festival grounds were divided into two areas by a large cement creek bed, most likely for the arroyo during the rainy season.

The western part of the festival, referred to as the Willow section, featured activities for both kids and adults, like crafts and drum circles. The bluesiest stage was also in this area, featuring classic names like Irma Thomas and Aaron Neville. We caught a bit of the blues/punk by Fantastic Negrito, and it made us hungry for more. But the buzz was around Jeff Goldblum and the Mildred Snitzer Orchestra. Arroyo Seco didn’t have the usual festival booths selling necklaces and flowy dresses. There was, however the Glasshouse Record Store, proving that the festival planners really knew their audience. 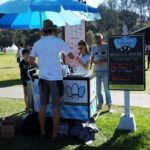 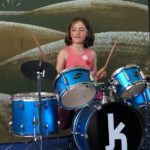 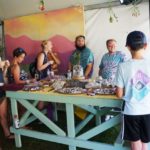 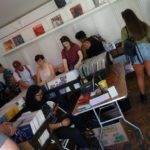 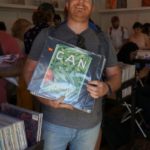 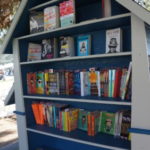 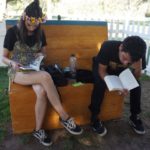 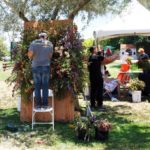 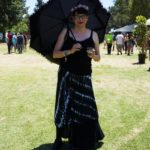 Other whimsical features were scattered throughout the grounds, like a teeter-totter that charged your phone, an interactive scent lab and little libraries curated by Vroman’s Bookstore with books about the scheduled musicians and the city of Pasadena.

On the eastern side of the creek bed there was a large expanse of grass, foliage, and even a little lake with a fountain. There was a VIP area, which didn’t look that appealing other than several food tents, like Gwen, and Chef Shirley Chung’s new concept, Ms. Chi’s Café, that were not available elsewhere. There was also a cordoned off area with special sections in front of each stage so you could avoid the riff-raff. I didn’t see any tents or indoor areas. Personally, for VIP prices I would like air conditioning and flush toilets. That’s living!

The medium-sized stage, Sycamore, was in the area near the Rose Bowl (which they kept open so we had access to … wait for it … YES! Flush toilets!). The stage featured some excellent acts like The Specials, The Bangles and The Revolution. The crowd was mellow and happy, and it was easy to get close to the front of the stage and dance.

We feasted mostly in this area, with generous portions of tender brisket from my favorite local brunch spot, Barrel & Ashes, and a “Sloppy Giuseppe” sandwich from Chef Michael Mina’s Cal Mare that featured Osso Buco with “cheesy spread.” I like that they took the snooty food down a notch by pairing it with something that sounds like it would be the featured recipe in a 1970s McCall’s. Their menu had cute band-related names like “Jagged Little Potatoes” and “This Fish, Not That Phish.” If you ask me, the vegan spots like Donna Jean and Sage Vegan Bistro missed an opportunity by not referring to their menu as “Robert Plant-based.”

If you are a regular LA Beat reader, you know that I love Burritos La Palma because their birria de res, or shredded beef, reminds me of the burritos served in the church hall when I was a child. I ordered the usual, burritos with no fillers, only birria de res tightly-wrapped in homemade flour tortillas so that with every bite the juice runs down my chin. (Catch my Robert Plant reference?) They were also serving nachos heaped with the birria, which were flying out of the place as fast as they could make them.

Sycamore was also home to the Seco’s Sweets and Treats section. I simply do not have enough superlatives and expletives to describe Dream Donut’s amazing Samoa Donut. It was better than its eponymous Girl Scout cookie. Yoga-urt Vegan Ice Cream in flavors like Salted Caramel Zen, Peanut Butter Prana and Green Tea Serenity earned high marks from Joan, our resident vegan, who praised the many refreshing flavors and smooth texture. 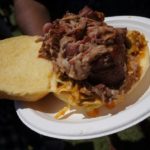 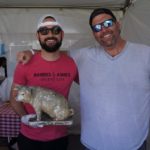 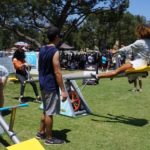 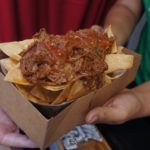 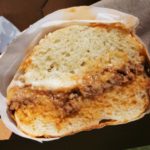 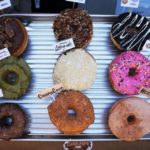 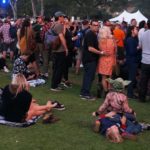 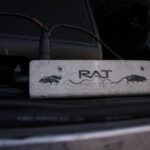 The Oaks, which was the superstar stage with the likes of Neal Young and Robert Plant had fantastic sound, but it was impossible to get close at all. Maybe that’s when that VIP pass really earned its asking price.

Our old friends at Hatchet Hall were hosting a shrimp boil with corn on the cob, sausage and new potatoes, which was genius because they don’t take as long to cook so the rest of the boil doesn’t turn into mush. They also cooked their shrimp to order, so although there was a wait, the shrimp wasn’t rubbery as so often happens at these boils. The plate was then sprinkled with a hot spice mix, another expert move.

We were understandably full by the time we hit Chef Fretz’s Top Round, which had supplemented their usual menu of roast beef sandwiches and tator tots with a dash of crazy. They used a Randy’s “Homer” donut as a bun, and filled it with grilled chicken, lettuce and Sriracha mayo, you know, so it would be healthy.

The prices per plate everywhere was around $16, which was rich for a festival, but wouldn’t be out of place in a restaurant. For that price you got a full serving meant to be a meal unto itself. Even splitting everything with our Music Editor, I wasn’t able to try everything I wanted, like Jon & Vinny’s pizza, Cassell’s Hamburgers, Hanjip’s Bowls or Chef Michael Hung’s Chilola’s Fine Filipino Tacos and Chef Michael Voltaggio’s STRFSH. I guess there’s always next year. 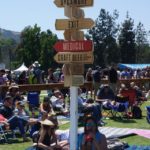 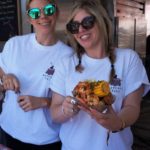 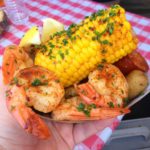 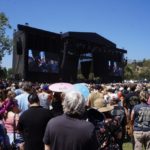 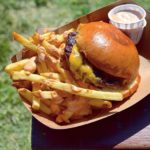 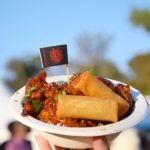 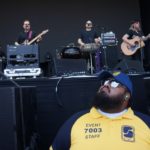 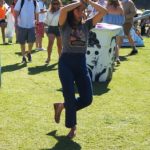 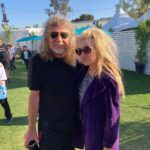