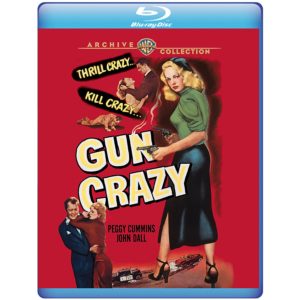 “Gun Crazy” (1950, Warner Archive Collection) He (John Dall, “South Pacific”) is a downtrodden, soft-hearted vet obsessed with guns. She (Peggy Cummins) is a carnival sharpshooter with deadly aim, champagne tastes, and an icy soul. They fall in love – well, lust, really – rob banks, and ultimately, lead each other to their doom. Audacious, Freud-steeped B-noir from Joseph H. Lewis (“Terror in a Texas Town“), who seems delighted to have such a hot-blooded canvas – co-written by Dalton Trumbo (billed as Millard Kaufman) – on which to exercise his idiosyncratic flourishes: relentless pacing, obsessively long takes, enough smoke and shadows to obscure a dozen noir, and some outrageous set pieces, including a jaw-dropping bank robbery filmed (in Montrose) in an unbroken take from the back seat of the getaway car for the entire, frenzied crime. This is one of the ballsiest, looniest films ever made, low budget or otherwise, but executed with real craft and vigor; you really can’t call yourself a diehard movie fan without submitting yourself to “Gun Crazy.” Warner’s Blu-ray includes commentary by Cinesavant’s Glenn Erickson, who details the film’s production and Lewis’s unusual career; it’s paired with the 2006 documentary “Film Noir: Bringing Darkness to Light,” which examines the genre and its practitioners through interviews with James Ellroy, Paul Schrader, Frank Miller, Henry Rollins and others. 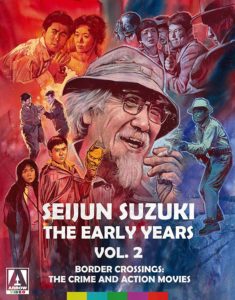 “Seijun Suzuki: The Early Years Vol. 2/Border Crossings: The Crime and Action Movies” (1957-1961) Second set of early genre efforts by the prolific Suzuki, made when he was wrapping out his contentious tenure with Nikkatsu Studios and about to embark on his unique and stylish ’60s output (“Branded to Kill”). The non-conformist spirit that fuels those efforts is glimpsed throughout the five films included in this set – all of which make their American video debut here – most notably in the offbeat “Tokyo Knights” (1960), a giddy, genre-bending drama about an industrial company scion (Koji Wada) who kicks against his corrupt superiors; what plays on paper as a thriller also encompasses, at various times, martial arts, Pop Art and broad comedy, and the result is compellingly weird and enjoyable. The same can be said for “Eight Hours of Terror” (1958), which borrows from both “Stagecoach” and “The Wages of Fear” but adds layers of commentary on Japan’s social strata, and “Man with a Shotgun” (1961), a revenge drama set in a mountain town that seems lifted whole from a Hollywood Western, with Hideaki Nitani as the titular accordion-playing (!) hero. For Suzuki and world cinema fans, “Early Years Vol. 2” is an intriguing glimpse at the shape-of-things-to come for one of Japan’s most eclectic and entertaining directors; the Arrow limited edition set includes all five movies on four discs, as well as commentary by Jasper Sharp on the ultra-gritty “Smashing the O-Line,” a video essay on the films by Tony Rayns, and trailers for several titles. 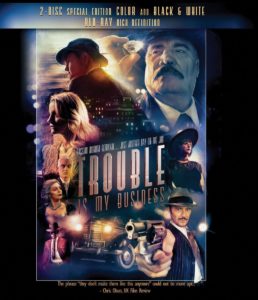 “Trouble is My Business” (2018, Random Media) World-weary private eye finds himself up to the brim of his fedora in trouble when he becomes entangled with a wealthy family with a small graveyard’s worth of skeletons in closets and not one but two Rare and Fabulous Objects: a rare diamond and a black book brimming with damaging secrets. Most noir tributes stumble by favoring style over substance, and this indie effort has similar issues (compounded by low-wattage digital photography and effects), but star/co-writer/director Tom Konkle has a clever script with some pleasantly hard-bitten dialogue (written with actress Brittney Powell, who plays the more fatale of the two femmes) handled by a game cast that includes “Road Warrior” bad guy Vernon Wells as a brutish cop, all of which may help win over skeptical fans of vintage thrillers. Random’s DVD/Blu-ray offers “Trouble” in both color and black-and-white formats (it should go without saying which is preferred). 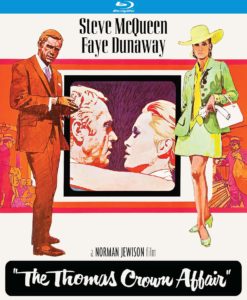 “The Thomas Crown Affair” (1968, Kino Lorber) Breezy caper with Steve McQueen as a Boston-based gentleman thief who carries out an elaborately plotted bank robbery for sheer thrills, and Faye Dunaway as the (initially) icy insurance investigator who becomes besotted by him. If you’re looking for grit, you won’t find it in “Thomas Crown” – this is a delicious bento box of high gloss production value and visual aesthetics, which extends from the impossibly charismatic leads, for whom even playing chess is somehow sexy, and Pablo Ferro’s and Christopher Chapman‘s split-screen imagery (which would become de rigueur for films and title sequences for decades) to the array of trinkets on display (Dunaway’s wardrobe by Theadora Van Runkle; the Ferrari 275 GTB/4 NART, a dream in automotive form) and Michel Legrand’s deep-swoon score, anchored by dreamy pop-psychedelic theme “Windmills of Your Mind” (which won an Oscar), sung by Noel Harrison. “Thomas Crown” has enough cool to ward off the summer heat in the screening room of your choice; Kino’s 50th Anniversary Blu-ray includes commentary by director Norman Jewison and by Lem Dobbs (who wrote “The Limey”) and Nick Redfern; Jewison and Ferro are also front and center for interviews about the film’s impeccable style, and there’s a vintage promo piece with glimpses behind the scenes.

Paul Gaita lives in Sherman Oaks, California with his lovely wife and daughter. He has written for The Los Angeles Times, LA Weekly, Variety and The Fix, among many other publications, and was a home video reviewer for Amazon.com from 1998 to 2014. He has interviewed countless entertainment figures from both the A and Z lists, but his favorites remain Elmore Leonard, Ray Bradbury and George Newall, who created both Schoolhouse Rock and the Hai Karate aftershave commercials. He once shared a Thanksgiving dinner with celebrity astrologer Joyce Jillson, and regrettably, still owes the late character actor Charles Napier a dollar.
View all posts by Paul Gaita →
This entry was posted in Movies and tagged Arrow Video USA, Kino Lorber, Random Media, Warner Archive Collection. Bookmark the permalink.

2 Responses to Movies Till Dawn: All Night Crime Wave 2018