The Damned, Radkey, The Darts (US) at the Fonda – Live Review and Photo Gallery 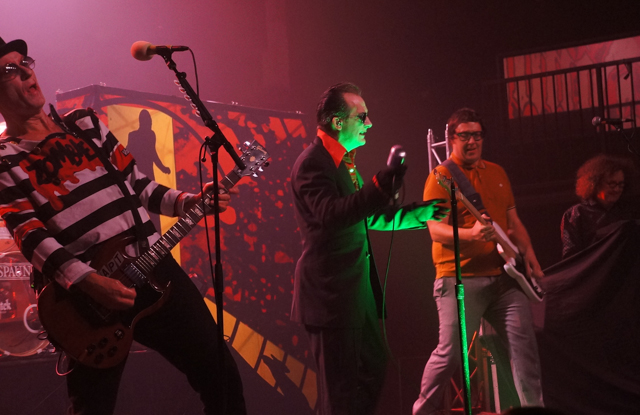 The Damned at the Fonda Theater November 2, 2018. All photos by Bob Lee for the Los Angeles Beat.

Ever since their first visit to these shores in 1977, Los Angeles has had it bad for the Damned. They were embraced early, in a big way, pointing LA’s first wave of punk bands toward an allegiance with the Brits’ more visceral, unruly take on primitive rock and roll than their artsy-fartsy New York counterparts. They made the turn from punk rock to vampiric goth anthems in the early eighties, right at the moment that Death Rock was being pioneered in Hollywood, and the town’s love for them only increased. The lingering affection from multiple generations was evidenced by their heavily sold out Fonda Theater appearance, where assembled punters of a wide range of ages playfully slammed into each other and pogoed up a storm.

I’ve seen the band seven times now since 2001, often on or near Halloween night – once when we both happened to be in New Orleans for the occasion, once when I found myself refused admission to some bullshit liquor company Halloween party on the roof of the Mondrian that I had been invited to, but saw the Damned’s name on the marquee across the street and raced over there, just in time to see them belting out “Pushing Too Hard” with Sky Saxon himself on vocals. I think I’ve seen three different bass players, including LA native Patricia Morrison at that first gig or two, but Dave Vanian, Captain Sensible, drummer Pinch and keyboardist Monty Oxymoron have been there the whole time. And they are still the same tight, yet reckless, little unit they always were. Maybe Vanian has a Dorian Grey style portrait in his home, but instead of a portrait, a DVD of an an aging band that plays like a decrepit version of itself, and every year it gets crappier and crappier.hatever his infernal secret, it’s working – the Damned that we see on stage is still damned entertaining.

Much of their set derives from The Black Album, that darkness-embracing collection from 1980 that still looms large over them. There’s a cover of Paul Ryan’s “Eloise” toward the end of the night that builds up an impressive head of steam. There’s a tune from 2001’s Grave Disorder, and one from their recent Evil Spirits, and a sprinkling of songs from their later 80s albums Strawberries and Phantasmagoria. But the churning at the front gets more intense as they give thanks from the stage to original guitarist Brian James – “without whom there would be no Damned, and no Sex Pistols, AND no bloody Green Day”, according to Sensible – and bust into a ferocious “Born To Kill” from their debut. It reaches a fever pitch for the set-closing “New Rose” and “Neat Neat Neat”, undeniable riffs, irresistible bait for the slam-happy. By the conclusion of final-encore “Smash It Up”, those at the front of crowd have been drained, and Vanian has recovered some of the color in his face.

The Damned were preceded on stage by Radkey, home-schooled brothers from the Kansas City area who have turned their family band into a world-touring institution. They have an approach to punk rock that’s informed by a deep knowledge of music and a wide-reaching intellect. At times they reminded me of Blue Oyster Cult being covered by the Bad Brains, but their sound was a shape-shifting animal that didn’t stay in one place for long. They have a unique chemistry that suggests a bright future ahead.

The Darts (US), whose members are split between Phoenix and So Cal, got the evening off to a frantic start, with a powerful blast of full-tilt garage rock.  Singer/ organist Nicole Laurenne dominated her Farfisa, climbing on top of it it and wrestling it to the ground without missing a note. Weeks on the road together had galvanized the band – including new guitarist Meliza Jackson, bassist Christina Nunez and drummer Rikki Styxx – into shape, playing with more ferocity than ever.  They’ve impressed mightily at recent club shows, but it was thrilling to see them on the big stage, taking command of a crowd that might not have known what to expect, but knew how to respond when faced with the real thing. 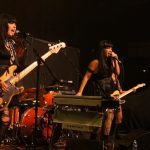 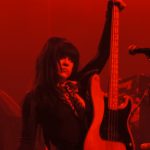 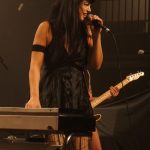 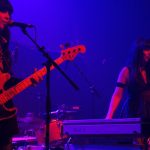 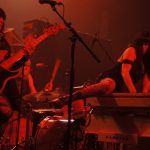 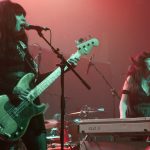 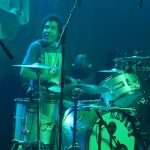 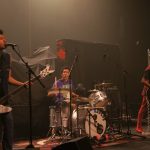 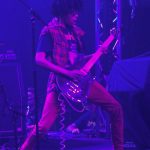 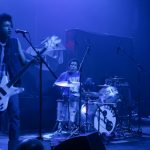 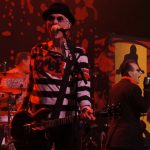 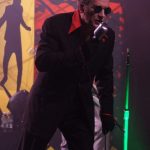 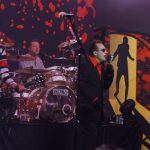 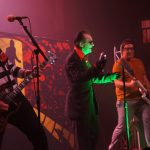 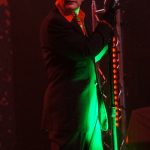 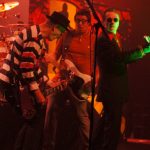 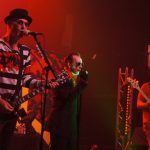 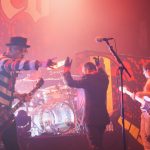 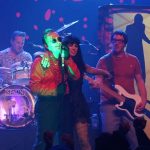