Movies Till Dawn: Old Fears for the New Year 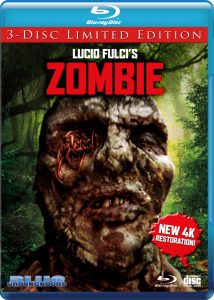 “Zombie” (1979, Blue Underground) Voodoo rites on a Caribbean island cause the dead to rise from their graves and consume the living. Jaw-dropping (and in its most ghastly scene, eye-popping) special effects by Giannetto de Rossi are the most memorable aspect of Lucio Fulci‘s gruesome, Italian-made grindhouse favorite, but there’s also a pervasive sense of inescapable dread – the dead are agonizingly slow here, but no less dangerous, as Tisa (sister of Mia) Farrow and friends discover – that elevates “Zombie” beyond its gut-crunching set-pieces and the many Continental carbons that followed. Blue Underground’s three-disc, limited edition Blu-ray bundles a 4K restoration with new observations by Troy Howarth and Stephen Thrower, vintage interviews with the cast and crew, a barrage of promotional material (e.g. its infamous U.S. one-sheet with the tag “WE ARE GOING TO EAT YOU!”) and a bonus CD of Fabio Frizzi‘s doomstruck electronic score. 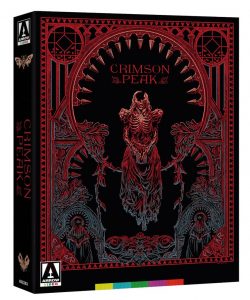 “Crimson Peak” (2015, Arrow Video) Soon after being swept away to the gloomy, titular English manse, aspiring novelist Mia Wasikowska is besieged by warnings from a battery of spirits about her new husband (Tom Hiddleston) and his overly protective sister (Jessica Chastain). Sumptuously appointed supernatural thriller by Guillermo del Toro draws heavily on Gothic literary and movie tropes – Mario Bava is feted in the rich color scheme, while the script by del Toro and Matthew Robbins checks “Rebecca” and Henry James, among others – and if the finished story travels slowly to a fairly unremarkable conclusion, there is much to enjoy in the ornate production design, Chastain’s brittle, perverse turn and some grisly CGI ghosts. Arrow’s limited edition Blu-ray features del Toro’s informative commentary and numerous featurettes on every aspect of production, as well as video essays by Kim Newman and Kat Ellinger and an 80-page hardbound book with essays, illustrations and interviews. 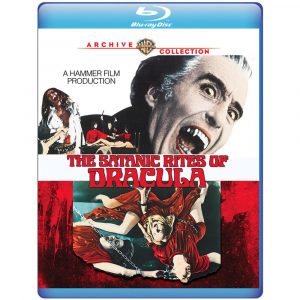 “The Satanic Rites of Dracula” (1973, Warner Archives Collection) Peter Cushing takes up the stake and mallet once again to prevent Christopher Lee‘s count from unleashing a biological agent that will wipe out mankind. Final Hammer feature to pair Lee and Cushing as vampire and pursuer, respectively, benefits greatly from their presence, though Lee is visibly fed up with this modernized take; in its defense, its dense, purple-pulp plot – which involves government figures in black magic covens, bikers and Joanna Lumley as Van Helsing’s granddaughter – is at times more entertaining than its predecessor, the more straight-forward “Dracula A.D. 1972.” But what’s sorely missing is the signature Hammer visual palette, rendered small-screen flat and dull here by TV vet Alan Gibson. Warner Archives Collection’s newly remastered Blu-ray includes the theatrical trailer. 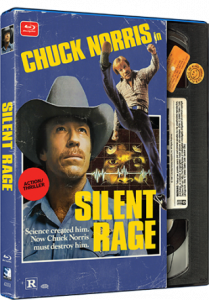 “Silent Rage” (1982, Mill Creek Entertainment) Low-budget bouillabaisse of slasher, mad scientist and action tropes with Chuck Norris as the sheriff of a small Texas town under siege by a psychopath made indestructible by an experimental formula. Surprisingly, the genre-splicing produces some entertaining junkfood, with competently choreographed action and adequate creepiness in the stalk-and-stab sequences. Norris is his usual ossified self, but the script by Joseph Fraley and Edward Di Lorenzo wisely relegates him to playing strong and silent and gives most of the heavy lifting to the supporting cast, which includes Ron Silver as a sympathetic shrink, Steven Keats and Willam Finley (“The Phantom of the Paradise) as the unscrupulous geneticists and Stephen Furst as comic relief. Mill Creek’s Blu-ray is part of its “Retro VHS” line, which mocks up its packaging to resemble a well-worn rental tape, complete with “Be Kind Rewind” sticker. 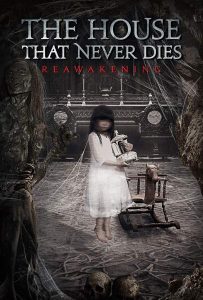 “The House That Never Dies: Reawakening” (2017, Well Go USA) Reeling from the loss of a child, art restorer Julian Cheung and his wife (Mei Ting) decide to focus on the discovery of occult objects at an allegedly haunted house that was the site of some baroque unpleasantness by its original owners. Their project is soon barraged by gruesome supernatural phenomena that seem to be focused on Teng, who is plagued by visions of a spectral little girl. Sequel to the box-office breaking “House That Never Dies” (2014), this Chinese ghost story – which is based on a real location – has a lot on its plate: director Joe Chien pings between past and present occupants of the house, and adds a handful of unnecessary subplots, but the spookshow material is unquestionably creepy and occasionally gross (black magic involving bugs, a Chinese horror favorite). Well Go USA’s DVD is widescreen and subtitled in English. 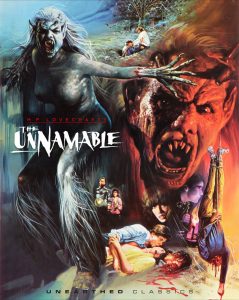 “The Unnamable” (1988, Unearthed Classics/MVD Visual) Smarty-pants college student Randolph Carter convinces his two pals to join him on an overnight at a local haunted house; their evening is interrupted by a pair of school jocks and their dates, all of whom make easy prey for the house’s hidden, demonic occupant. Low-budget adaptation of H.P. Lovecraft‘s short story issued in the wake of “Re-Animator’s” surprise success lacks that film’s clever detours around budget shortcuts and wicked black humor, but does offer up an impressive monster, a wealth of offbeat dialogue and performances (Charles Klausmeyer‘s jittery Howard), lots of blood and an appearance by the Necronomicon. Unearthed’s uncut, remastered Blu-ray presentation includes loose, likable commentary by and interviews with the cast and crew.

Paul Gaita lives in Sherman Oaks, California with his lovely wife and daughter. He has written for The Los Angeles Times, LA Weekly, Variety and The Fix, among many other publications, and was a home video reviewer for Amazon.com from 1998 to 2014. He has interviewed countless entertainment figures from both the A and Z lists, but his favorites remain Elmore Leonard, Ray Bradbury and George Newall, who created both Schoolhouse Rock and the Hai Karate aftershave commercials. He once shared a Thanksgiving dinner with celebrity astrologer Joyce Jillson, and regrettably, still owes the late character actor Charles Napier a dollar.
View all posts by Paul Gaita →
This entry was posted in Movies and tagged Arrow Video, Blue Underground, Mill Creek Entertainment, Unearthed Classics, Warner Archives Collection, Well Go USA. Bookmark the permalink.

One Response to Movies Till Dawn: Old Fears for the New Year