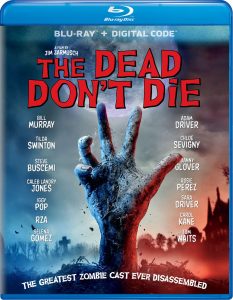 “The Dead Don’t Die” (2019, Lionsgate Home Entertainment) Polar fracking, or something equally ominous in tone, causes the dead to rise from their graves, which, if judged by the muted responses of police officers Bill Murray, Adam Driver and Chloe Sevigny, is only a minor concern to the residents of a rural Pennsylvania town. Good-natured goof on/homage to zombie movies by Jim Jarmusch is done in his trademark deadpan style, but with abundant gore and something like a message – it’s a nice world, and ours to ruin – but mostly plays like an expensive backyard movie peopled by Tilda Swinton, Selena Gomez, Tom Waits, Steve Buscemi, and Iggy Pop as a coffee-guzzling corpse. The Blu-ray/DVD includes brief featurettes on Murray and the cast and behind-the-scenes clips. 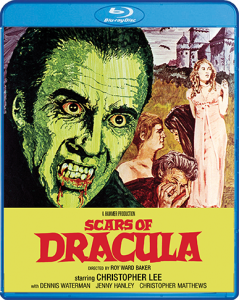 “Scars of Dracula” (1970, Shout! Factory) The disappearance of hard-living Christopher Matthews leads his brother (Dennis Waterman) and fiancée Jenny Hanley to Castle Dracula, where an ill-tempered Count (Christopher Lee) – aggrieved, no doubt, over being revived by a bat spewing blood over his ashes – waits. Hammer’s sixth Dracula title has its share of detractors for eschewing Gothic leanings for more graphic violence, but Lee remains compelling as the Count, despite his pasty makeup, and director Roy Ward Baker orchestrates a few striking scenes, including one taken from Bram Stoker in which Dracula scales headfirst down the walls of his lair. WAC’s Blu-ray offers two widescreen presentations and two commentaries – one with Lee and Baker from 2004, and a newer track with Ted Newsom and Constantine Nasr – as well as a making-of doc. 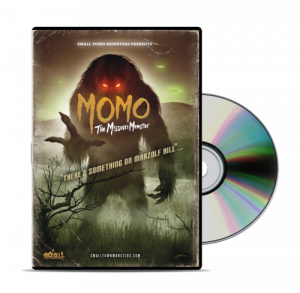 “MOMO: The Missouri Monster” (2019, Small Town Monsters) Microbudget indie unspools with a clever conceit: it’s an episode of a basic cable monster hunter program that looks at both cryptid stories – in this case, Missouri’s homegrown Bigfoot, Momo – and horror movies inspired by them, represented here by deliberately grainy clips from a faux ’70s pic about the shaggy, stinky apeman. Though hampered by budget, director Seth Breedlove wields his mix of documentary footage, interviews with real-life crypto chasers like Cliff Barackman and affectionate recreations with more imagination and a quarter of the budget of most “grindhouse” tributes; the DVD includes a making-of featurette. 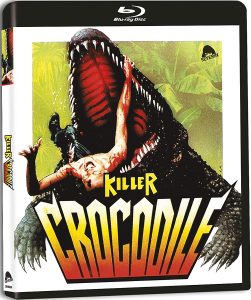 “Killer Crocodile” (1989, Severin Films) Toxic waste causes a river crocodile in the Dominican Republic to not only grow huge but also develop an appetite for every person, pet and watercraft unlucky to cross its path. Italian-made “Jaws” carbon from producer-turned-director Fabrizio De Angelis (“Zombie“) borrows liberally from the Spielberg film – there’s a corrupt local official (Van Johnson), an ersatz Quint (Ennio Girolami), and even a Williams-soundalike score by Riz Ortolani – and adds gooey gore, absurd dialogue and a animatronic croc that appears to grow or shrink at will. Ninety minutes of calorie-free creature feature fun; Severin’s Blu-ray includes interviews with SPFX designer Giannetto De Rossi and star Richard Anthony (son of Richard) Crenna. 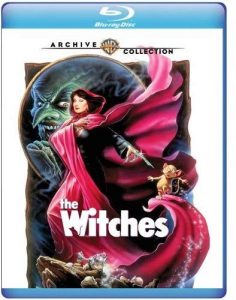 “The Witches” (1990, Warner Archives Collection) While on holiday with his grandmother (Mai Zetterling), recently orphaned Jasen Fisher discovers that his fellow guests are actually witches with decidedly horrible plans for him and fellow children. Though disliked by author Roald Dahl, this adaptation of his 1983 novel by director Nicolas Roeg and producer Jim Henson approximates the mix of charm and unease found in his children’s fiction; casting Anjelica Huston as the operatically evil Grand Witch and well as Rowan Atkinson and Jane Horrocks as comic relief are also plusses. “The Witches” should work as Halloween kids’ fare for young Dahl devotees, though very grade-school audiences might be alarmed by the Henson makeup for the witches . WAC’s Blu-ray is the first US home video release in hi-def and widescreen.

Thank you to Warner Archives Collection for sending this Blu-ray gratis for review. 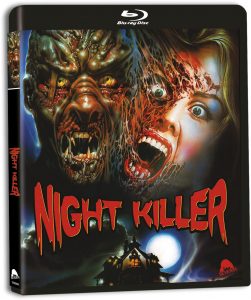 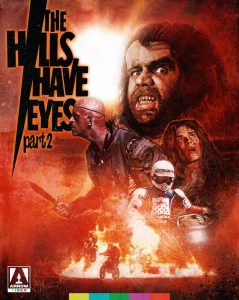 “The Hills Have Eyes 2” (1984, Arrow Video) A motocross team en route to a race makes the mistake of taking a shortcut through the same desert that housed a family of mutant cannibals. Nothing went right for writer-director Wes Craven‘s sequel to his harrowing 1977 horror-survival film, including a lack of funding which forced Craven and producer Peter Locke to pad the picture with flashbacks for nearly every character (even the dog). “Eyes 2” is probably best enjoyed as an example of film triage, though returning villain Michael Berryman is always a welcome presence; Arrow’s Blu-ray includes a making-of doc featuring Locke, Berryman and composer Harry Manfredini, commentary by the Hysteria Continues podcast crew, promotional postcards and a mini-poster. 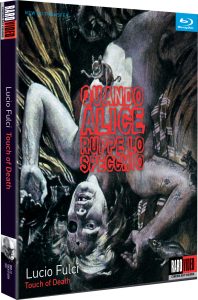 “Touch of Death” (1988, Kino Lorber/Raro Video) Well-heeled psychopath Brett Halsey finds a solution for his most abiding and troubling issues – a gambling addiction and cannibalism – by seducing, fleecing, murdering and then devouring wealthy widows. Low-budget stalk-and-slash fare from Lucio Fulci, who makes the unusual decision of playing the grisly murders and dismemberments for laughs; for completists of the director’s assaultive body of work, mostly, though American ex-pat Halsey has his amusingly blithe moments. The Kino/Raro Blu-ray includes interviews with Eurocult vet Pierluigi Contini and liner notes which detail Fulci’s declining fortunes and health while making the film.

Paul Gaita lives in Sherman Oaks, California with his lovely wife and daughter. He has written for The Los Angeles Times, LA Weekly, Variety and The Fix, among many other publications, and was a home video reviewer for Amazon.com from 1998 to 2014. He has interviewed countless entertainment figures from both the A and Z lists, but his favorites remain Elmore Leonard, Ray Bradbury and George Newall, who created both Schoolhouse Rock and the Hai Karate aftershave commercials. He once shared a Thanksgiving dinner with celebrity astrologer Joyce Jillson, and regrettably, still owes the late character actor Charles Napier a dollar.
View all posts by Paul Gaita →
This entry was posted in Movies and tagged Arrow Video, Kino Lorber, Liongate Home Entertainment, Raro Video, Severin Films, shout factory, Small Town Monsters, Warner Archives Collection. Bookmark the permalink.