Movies Till Dawn: Mad, Bad and Dangerous to Know 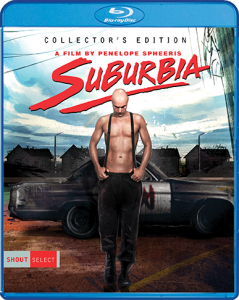 “Suburbia” (1984, Shout! Factory) How to Make a Punk: Bill Coyne (RIP) flees his abusive mom and finds something like a new family – as well as more trouble – among the forgotten kids living in an abandoned Los Angeles tract house. Low-budget but very effective docudrama from writer-director Penelope Spheeris gains considerable versimilitude by using non-actors (some of whom, like Chris Pedersen and Flea, went on to media careers) and some of the grimier parts of Downey and Norwalk as its stars and location; save for a few bits of exploitative nonsense at the behest of producer Roger Corman, it feels as unsentimental and honest as it did upon its release. With live performances by D.I., T.S.O.L. and the Vandals and a soundtrack featuring the Germs; Shout! Factory’s Collector’s Edition Blu-ray includes two unvarnished commentary tracks by Spheeris, one with producer Bert Dragin and co-star Jennifer Clay (aka Sheila), and plenty of promotional material (trailer and TV spots). 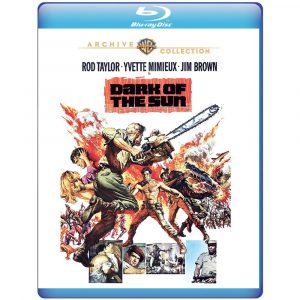 “Dark of the Sun” (1968, Warner Archives Collection) Under the pretense of a rescue mission, mercenaries Rod Taylor and Jim Brown are dispatched to retrieve a fortune in diamonds from territory in the Congo overrun by sadistic rebels. Brawny, men’s magazine-styled action-thriller from British cinematographer turned director Jack Cardiff has a cult following for scenes of unmitigated (for the time period) violence, with the height of insanity coming in a fight between Taylor and chainsaw-wielding ex-Nazi Peter Carsten; its politics (and excesses) are questionable, but it’s an undeniably gripping experience, with a durable cast that includes Yvette Mimieux and Calvin Lockhart and a wonderfully doomy, Morricone-esque score by Jacques Loussier (from which Quentin Tarantino borrowed for “Inglorious Basterds“). Warner Archives’ Blu-ray features enthusiastic commentary by screenwriter Larry Karaszewski (“Ed Wood”), Josh Olson from “Trailers from Hell” and podcasters Brian Saur and Elric D. Kane. 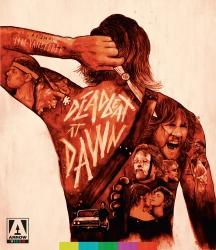 “Deadbeat at Dawn” (1988, Arrow Video) Midwestern street gang leader Goose (writer-producer-director Jim Van Bebber) decides that the best way to settle scores with rival outfit the Spiders – who have murdered his girlfriend – and his old gang, the Ravens, is to kill every last one of them. Supercharged microbudget action-thriller from multi-hyphenate Van Bebber – best known for his harrowing, long-gestating “Manson Family” – balances its production shortcomings with a relentless pace and outrageously gory action setpieces that at times rival or surpass major studio efforts; Arrow’s Blu-ray includes commentary by Van Bebber and “Deadbeat” collaborators a lengthy retrospective featurette, a brace of Van Bebber’s short efforts, including the brutal “Roadkill” and “My Sweet Satan,” and music videos for Pantera and Superjoint, among others 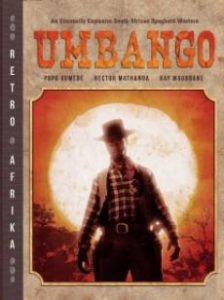 “Umbango” (1985, Indiepix Films) Cowpokes Jack and Owen find that their plan to establish a ranch in a KwaZulu village is opposed by town boss KK and his gang of thugs, and decide to settle things as they did in the American Old West. South African feature made during apartheid rule with an all-black cast by prolific white director Tonie Van der Merwe (“Joe Bullet“) is an affectionate and uncomplicated nod to Hollywood horse operas and benefits from a larger-than-usual budget that allows for modest but effective sets, props and costumes. “Umbango” and “Revenge” – another Zulu-language Western from ’85, and even more simple in story and execution – are one of a handful of South African titles making their Stateside debuts through Indiepix’s Retro Afrika imprint; all are energetic mash-ups of American genre film tropes and African sensibilities. 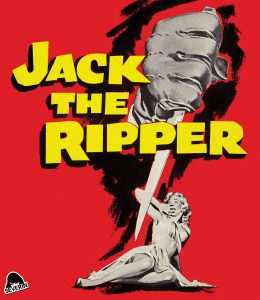 “Jack the Ripper” (1959, Severin Films) American policeman Lee Patterson teams with British inspector Eddie Byrne to stop the titular madman, who is preying on the barmaids and dance hall girls of London’s Whitechapel district. UK-made horror-thriller is an evergreen favorite among the psychotronic faithful for its surprisingly vicious murders and a grisly closing gimmick in the U.S. edit – the image turns from black-and-white to vibrant color when one character meets a horrible fate – and for its creators: screenwriter Jimmy Sangster, who penned many of Hammer’s best titles, and producers-directors-cinematographers Monty Berman and Robert S. Baker, who oversaw many well-loved British TV series (“The Saint“) and ’50s chillers (“The Crawling Eye“). Severin’s Blu-ray offers both the American and British versions, which have different openings and soundtracks (jazzmen Pete Rugolo and Jimmy McHugh handle the Stateside score); Baker, Sangster and AD Peter Manley contribute commentary, and alternate “continental” (read: spicier) takes, a US trailer and an interview with Ripper movie scholar Denis Meikle.

And, briefly, from Filmrise: the Turkish thriller “Inflame” (2018) benefits from the performance of lead Algi Eke as a news station editor whose nervous breakdown seems to coincide with the country’s new purges of free speech. Ceylan Ozgyn Ozcelik‘s directorial debut works best when focusing on depicting Eke’s fragile mental state. More successful is the Hong Kong comedy “Free and Easy” (2018), Geng Jun’s quietly cracked look at life among a group of eccentric small time criminals and lawmen in an unremarkable Chinese town.

Paul Gaita lives in Sherman Oaks, California with his lovely wife and daughter. He has written for The Los Angeles Times, LA Weekly, Variety and The Fix, among many other publications, and was a home video reviewer for Amazon.com from 1998 to 2014. He has interviewed countless entertainment figures from both the A and Z lists, but his favorites remain Elmore Leonard, Ray Bradbury and George Newall, who created both Schoolhouse Rock and the Hai Karate aftershave commercials. He once shared a Thanksgiving dinner with celebrity astrologer Joyce Jillson, and regrettably, still owes the late character actor Charles Napier a dollar.
View all posts by Paul Gaita →
This entry was posted in Movies and tagged Arrow Video, Indiepix Films, Severin Films, shout factory, Warner Archives Collection. Bookmark the permalink.