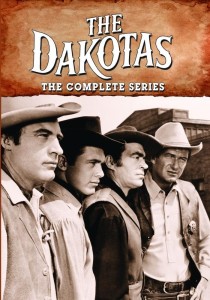 A shootout between U.S. Marshal Frank Ragan (Larry Ward) and his deputies and the gun-crazy Barton brothers (Joe Di Reda and Norman Alden – the voice of Aquaman!) ends not as a victory for the law, but a colossal and tragic mess, with dead bodies in the streets of Crystal Springs, the town preacher (Charles Irving) wounded and the brothers shot dead in his chapel. The explosion of violence leaves youthful deputy Del Stark (Chad Everett) unmoored and unprepared for the arrival of the eldest Barton brother (James Anderson), who plans to settle the score with Ragan and his men. The decidedly mature tone of this episode epitomizes this short-lived action drama from William T. Orr, who produced many of Warner Bros. Television’s most popular series in the ‘50s and ‘60s (“Maverick,” “F Troop,” “77 Sunset Strip”). In addition to its solid cast, led by Ward and the great Jack Elam, “The Dakotas” boasted excellent direction and writing – handled here by TV vets Richard C. Sarafian and Cy Chermak (“CHiPs”) – and quality guest stars each week; “Sanctuary” features terrific turns by the sleepy-eyed but malevolent Anderson (the Jonathan Banks of his day) and Les Tremayne as the Bartons’ anguished father. Despite this laundry list of laurels, “Sanctuary at Crystal Springs” led to the swift and sudden demise of “The Dakotas.” Viewers were outraged over the violence of the shootout and in particular, the deaths of the Barton boys at the hands of Everett and Elam in a church; ABC responded by yanking the series after just one more episode. All 19 episodes are included (a 20th, “Black Gold,” was completed but never aired) are included in this five-disc set. 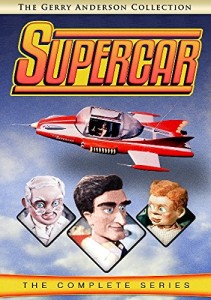 When a plane carrying astronaut Bill Gibson and his brother Jimmy crashes into the ocean, test pilot Mike Mercury seizes the opportunity to test out the prototype for Supercar, a jet-propelled vehicle capable of traveling in any environment. With the help of scientists Dr. Popkiss and Dr. Beaker, Mike races to the crash site in the hopes of rescuing the brothers and their pet monkey, Mitch, before their meager supplies run out. “Supercar” was the third of producer Gerry Anderson’s kid-friendly series for UK television, and the first to use the term “Supermarionation” to describe his process of combining marionettes with motors inside the heads that synchronized lip movement with recordings of the actors’ voice. To accommodate the hardware, the early designs for Anderson’s puppets, as seen in this series and predecessors like the Western fantasy show “Four Feather Falls,” had heads that were disproportionately larger than their bodies, resulting in an ungainly – and in the case of Mitch the Monkey, sometimes alarming – appearance (see cover art). Anderson would streamline the process for subsequent shows like “Captain Scarlett and the Mysterons,” allowing his marionette heroes to carry more realistic features. For some, Mike Mercury and his pals will be the source of endless amusement, but I think their unusual look helps to preserve the idea that “Supercar” is broad fantasy for young viewers – sort of a Space Age fairy tale with a pretty sweet coach at its center. The fine-detailed production design that earmarks all of Anderson’s Supermarionation titles is also on display here, most notably in Drs. Popkiss and Beaker’s gizmo-laden lab, and does much to reduce the goofier aspects of the marionettes’ appearance. Timeless/Shout Factory’s five-disc set includes the entire 1961-1962 run on ITV and features an interview with Anderson and commentary from his wife and producing partner, Sylvia Anderson, who also provided female voices for the show. 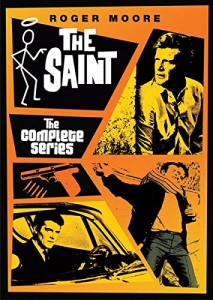 After years of evading the dogged Inspector Teal (Ivor Dean), gentleman thief Simon Templar (Roger Moore) – a.k.a. “The Saint” – is apprehended by the Scotland Yard detective and sentenced to prison. But the arrest is a ruse: Teal has employed The Saint to infiltrate an international gang of criminals who specialize in freeing inmates from the inside. This fifth season episode of the long-running ITV series, adapted from the novels by Leslie Charteris and directed by Moore himself, who also served as the show’s co-producer, is indicative of its appeal, with high production values and plenty of action interspersed with light comedy, and anchored by a solid guest cast which here includes Donald Sutherland as a brutish inmate and John Gregson and Jean Marsh as the gang’s leaders. Of course, it’s Moore’s bemused turn as Templar that not only sets the tone for the show, but his subsequent performance as James Bond. The Timeless/Shout set compiles the entire 118-episode run of “The Saint,” and includes commentary by Moore, executive producer Robert S. Baker and members of the production team on nine episodes, including “Escape Route.” 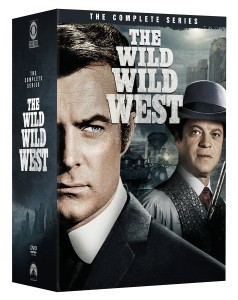 This third episode of the popular proto-steampunk series introduces its most popular villain, the diminutive but diabolical Dr. Miguelito Loveless, played by Oscar nominee Michael Dunn. In his first outing, Dr. Loveless and his giant, mute assistant Voltaire (Richard Kiel) have acquired – through nefarious means – a prototype of the world’s most powerful explosive, a tiny device with tremendous destructive capabilities. Loveless’ elaborate and megalomaniacal scheme – he wants the land rights to California (!) turned over to him or 5,000 people will be killed with the explosive – and Dunn’s gleeful performance are the episode’s key pleasures, and Loveless would return to vex series heroes James T. West (Robert Conrad and his impossibly tight slacks) and partner Artemus Gordon (Ross Martin) nine additional times throughout the series’ four-season run. The 3’10” Dunn was discovered as part of a nightclub act with Phoebe Dorin (who played Loveless’ other assistant, Antoinette), and contributed memorable appearances on“Star Trek,” “Night Gallery” and “Get Smart,” among other series, as well as a Tony-nominated turn in the 1963 production of “The Ballad of the Sad Café.” A dedicated advocate with children who shared his condition (dwarfism), he also enjoyed fooling the press with fictitious stories about his physical accomplishments – at various times, he claimed to be a skydiver, judo master, and aviator. He died from a heart condition in 1973. “Wild, Wild West” writer John Kneubuhl discusses how he conceived Loveless after reading about Dunn in one of the countless extras on the sprawling, 26-disc “Complete Series” set.

Two supernaturally-themed vignettes from the mid-‘50s UK anthology series: in “The Kleptomaniac,” a young woman with a compulsion to steal makes off with a suitcase containing an unpleasant surprise, while narrator Peter Williams details a seemingly indestructible painting in “Grandpa’s Portrait.” Despite their brief running time – each episode clocks in at just three minutes – “Strange Experiences” manages to summon up an impressive amount of mysterious atmosphere; the Sinister Cinema DVD compiles six of its 28 episodes, each of which includes an original spot from its American sponsor (Air-Wick air freshener); it’s followed a barrage of vintage drive-in intermission spots (“Five minutes until show time!”) and then “Insomnia” (1963), an odd and fascinating short film by French comedian Pierre Etaix about a man whose bout with sleeplessness spurs him to pick up a vampire novel, which he “enters” in dreamlike sequences that blend silent film-style visual gags and Gothic horror atmosphere. 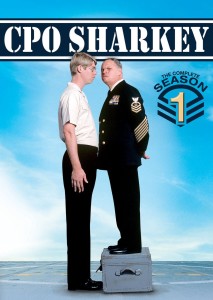 Feeling out of step with the times after his last birthday, veteran Naval Chief Petty Officer Otto Sharkey (Don Rickles) decides to see how the younger set lives by visiting a San Diego-area nightclub called The Disco Cave, where he does indeed boogie on down before the end credits. The collision of the hopelessly square Sharkey and the Boogie People is detailed by the moldiest of shticky sitcom situations – Sharkey doesn’t understand the moves and the lingo and why women keep asking him to dance – that’s enlivened only by Rickles’ short-fused presence. Time/Life’s three-disc set compiles all 15 episodes from “Sharkey’s” 1976-1977 debut season, and includes the “Tonight Show” clip with Johnny Carson barging onto the “Sharkey” set to berate Rickles for breaking his cigarette case. Oh, and if you’re looking for the episode featuring the Dickies, you’ll have to wait for the release of the second season set. 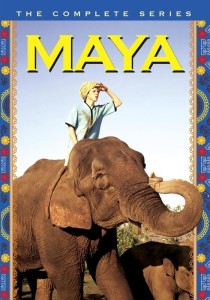 This short-lived NBC series, produced by British independents the King Brothers and based on their 1966 film of the same name, benefited hugely from location shooting in India and plentiful action, including a remarkable amount of out-and-out mayhem. Oscar-winning screenwriter Stirling Silliphant penned this debut episode, which flips the script on the feature’s premise: Jay North (“Dennis the Menace”) reprises his role as an American teenager who travels to India to meet his father, but here, the dad – played by Clint Walker in the movie – is presumed dead after an attack by a tiger. Sajid Khan also returns as Raji, an orphan who helps North search for his father with the help of his exceptionally versatile elephant, Maya (not sure if it’s reprising its role), who serves as transportation and occasional bodyguard. “Blood of the Tiger” establishes the basic premise of the series – North and Khan travel the length and breadth of India in search of the missing dad and encounter considerable danger – here, the alleged man-eating tiger – that is resolved by Maya, whose brawl with the big cat is such a show-stopper than the footage turned up in at least two other episodes. The exotic locations, brisk pace and exceptional production value – the action set-pieces alone approach big-screen levels – should have minted “Maya” as a hit, but low ratings and high production costs forced NBC to pull the plug after just 18 episodes (it was replaced on the schedule by – “The Saint”!). The Warner Archive Collection compiles the entire network run on five sharp-looking discs.

Paul Gaita lives in Sherman Oaks, California with his lovely wife and daughter. He has written for The Los Angeles Times, LA Weekly, Variety and The Fix, among many other publications, and was a home video reviewer for Amazon.com from 1998 to 2014. He has interviewed countless entertainment figures from both the A and Z lists, but his favorites remain Elmore Leonard, Ray Bradbury and George Newall, who created both Schoolhouse Rock and the Hai Karate aftershave commercials. He once shared a Thanksgiving dinner with celebrity astrologer Joyce Jillson, and regrettably, still owes the late character actor Charles Napier a dollar.
View all posts by Paul Gaita →
This entry was posted in Movies, Television. Bookmark the permalink.