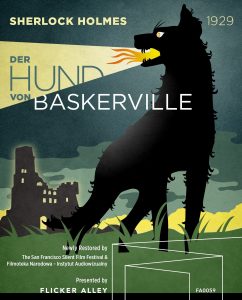 “Der Hund von Baskerville” (1914/1929, Flicker Alley) Two silent takes on the Sherlock Holmes adventure “The Hound of the Baskervilles” by Austrian writer-producer-director Richard Oswald, a largely unsung figure in German Expressionist film. Both versions bear only passing resemblances to Arthur Conan Doyle’s story – it’s boiled down to Holmes (Alwin Neuss in 1914 and Carlyle Blackwell in 1929), a hound and the villain Stapleton, while Watson only rates an appearance in the latter version. The “Hunds” also hew closer to serials of the period – both feature a surfeit of secret panels and passages, which Neuss’s Holmes overcomes with a barrage of Bondian gadgets (Blackwell appears to get by on sheer gusto). But the ’29 version, written and directed by Oswald (who wrot the ’14 “Hund”), stands out for its striking camera angles and Gothic lighting, especially on the impressive English moors set, which underscores scholars’ comparison of his surviving work (much of which is lost or obscure) to major German Expressionists like Fritz Lang. Both are entertaining, energetic features that make the most of their brief (65-minute) running times; Flicker Alley’s set features the 2018 remaster of the ’29 version, which was long thought lost; supplemental features cover the restoration and the enduring popularity of “Hound” through interviews with Holmes experts Glen Miranker and Russell Merritt, who also penned the lavishly illustrated liner notes. 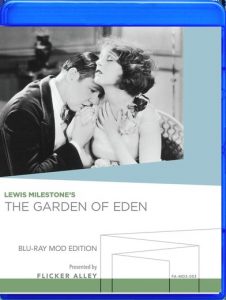 “The Garden of Eden” (1928, Flicker Alley) Frothy romantic comedy designed as a vehicle for star Corrine Griffith, although it accomplishes much more in its brief (71-minute) running time. The script by Hanns Kraly – who honed his comic talents with Ernst Lubitsch – seems to have two distinct halves, though both play with notions of mistaken identity and intention, as well as the pleasures of being one’s true self. In the first half, aspiring singer Griffith discovers that the opera house job she believes will launch her career is actually at a bawdy Hungarian nightclub (!). She escapes from the club, and its predatory female manager (Maude George), with the help of wardrobe lady Louise Dresser, whose true identity – a baroness – kicks off the second half of the film, in which Griffith, now pretending to also be a baroness, is wooed by nice guy songwriter Charles Ray. Shenanigans and complications ensue, though they’re burnished by Lewis (“All Quiet on the Western Front”) Milestone‘s direction and art direction by William Cameron Menzies, as well as the starry-eyed performances of Griffith and Ray. Flicker’ Alley’s MOD Blu-ray includes production stills and lobby cards from the original press book, as well a wonderfully weird short called “Hollywood the Unusual” (1927), which gapes and pokes fun at the array of ornate architecture in Hollywood and greater Los Angeles, including such landmarks and oddities as the Ambassador Hotel and Brown Derby, the highly inappropriate Jail Cafe (now El Cid in Silverlake) and Zulu Hut (now the Fox and Hounds in Studio City) the Andalusia and Patio del Moro apartments in West Hollywood, a Samarkand Ice Cream “Freezer,” and the Egyptian and Chinese theaters. It’s essential for LA Plays Itself devotees. 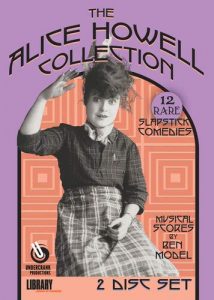 “The Alice Howell Collection” (1914-1925, Undercrank Productions) Twelve-film collection of silent shorts is an excellent introduction to Howell’s brand of fearless physical comedy. A former supporting player who appeared alongside Charlie Chaplin, Howell rose to fame, and earned her own production company on the strength of her screen persona – a blue-collar naïf whose clothes and hair style can be best described as post-explosion – and willingness to indulge in no-holds-barred slapstick (much of which was crafted by Howell herself). And while Howell could both take and dish out mayhem as well as any of her male comedy peers – she decimates not one but two high-class parties in 1920’s “Distilled Love” (which co-stars Oliver Hardy) and “Cinderella Cinders” (1920) – she also maintained an air of grace and self-confidence (albeit slightly addled) while doing so. Historian/composer and Undercrank chief Ben Model – who wrote and performed the scores for all of the films on the two-disc set – rightly compares her to Lucille Ball and Carol Burnett, both of whom shared Howell’s gumption and gift for pratfalls. And while she didn’t enjoy as long a career as theirs – she retired a wealthy woman prior to the launch of talking films – she accomplished much while she was in the spotlight. 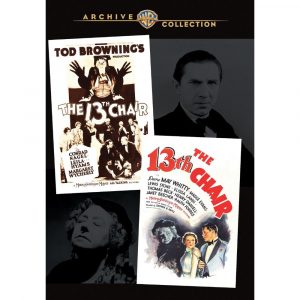 “The Thirteenth Chair” (1929/1937, Warner Film Archives) Speaking of films adapted from plays, here’s two different adaptations of the 1916 Broadway thriller about a séance to root out a murderer among a gathered group. Admittedly, this is a bit of a cheat, as both versions are sound productions, but there was a silent version, filmed in 1919 and now lost; regardless, you get a wealth of Old Dark House tropes in both versions, though the 1929 “Chair” is more notable as director Tod (“Dracula”) Browning’s first sound film and for his first screen collaborations with both Bela Lugosi, who sports a phenomenal set of false eyebrows as an investigator, and Leila Hyams, who would appear in Browning’s career-quelling “Freaks.” Dame May Whitty takes over the case in the ’37 “Chair,” directed by the prolific George B. Seitz and featuring Henry Daniell (who gives Lugosi a run for his money in the arch/camp department) and future Universal horror player Holmes Herbert, who plays the same role in both films.

Paul Gaita lives in Sherman Oaks, California with his lovely wife and daughter. He has written for The Los Angeles Times, LA Weekly, Variety and The Fix, among many other publications, and was a home video reviewer for Amazon.com from 1998 to 2014. He has interviewed countless entertainment figures from both the A and Z lists, but his favorites remain Elmore Leonard, Ray Bradbury and George Newall, who created both Schoolhouse Rock and the Hai Karate aftershave commercials. He once shared a Thanksgiving dinner with celebrity astrologer Joyce Jillson, and regrettably, still owes the late character actor Charles Napier a dollar.
View all posts by Paul Gaita →
This entry was posted in Movies and tagged Flicker Alley, Undercrank Productions, Warner Archives Collection. Bookmark the permalink.

One Response to Movies Til Dawn: Silents, Please