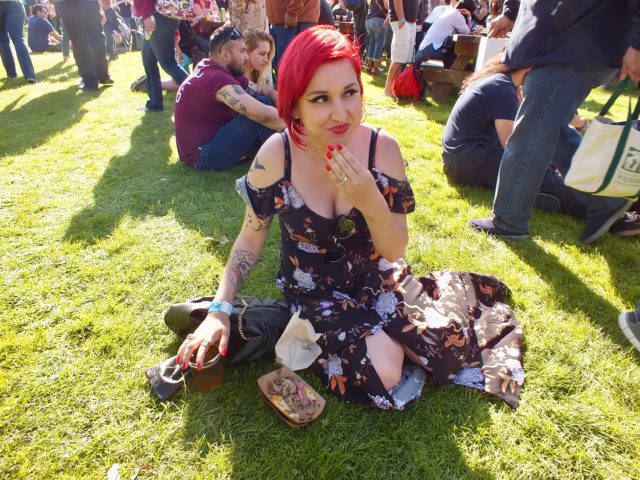 Enjoying food and beer at Sabroso. Photo by Ed Simon for The Los Angeles Beat.

For the sixth year in a row, the Sabroso Craft Beer, Taco and Music Festival will be happening at the beautiful Doheny State Beach in Dana Point. This year the event will be expanding to two days of beer, food and live bands on Saturday, April 6, 2019 and Sunday, April 7, 2019. Festival hours will be from 1:00 PM until 9:30 PM Saturday and 1:00 PM – 9:00 PM Sunday (VIP entry is at noon).

This year’s music lineup is a combination of old school punk and the Warped tour. Some of the bands hitting the stage on Saturday are St Patrick’s Day favorites Flogging Molly with their Celtic punk, Good Charlotte, that turn-of-the-century rock band led by the Madden brothers, and doing-it-since-1980 old school punkers Bad Religion.
Sunday’s headliner, The Offspring, is supported by an interesting duo–the Descendents and Greg Ginn’s Black Flag. That’s Black Flag, not FLAG, the competing band for which Bill Stevenson, the drummer for the Descendents, also drums. Yeah, the same Bill Stevenson who played drums for Black Flag with Greg Ginn on guitar way back when. Tell me you don’t want to be a fly on the wall backstage.

One highlight of the festival is unlimited free tastings of more than 150 craft beers from 12 noon until 4 PM both days. Just a few of the ciderhouses and breweries on tap include Bootleg Breweries, Modern Times Beer, Stone Brewing, Russian River, Acoustic Ales and 2 Towns Ciderhouse. Gourmet tacos from vendors like Chronic Tacos, Panchos Tacos, Border Tacos, Vegan Taco Company, and Spicy Bite will be available for purchase. taco vendors will also be competing for Sabroso’s “Best Of Show,” awarded by a panel of food judges.

Other entertainment includes Lucha Libre-style wrestling, with matches both days culminating with renowned Mexico City luchador Cesar Gonzalez returning this to defend his 2018 title of “King Of The Ring.” On Sunday, the Gringo Bandito Chronic Tacos Challenge eating competition will pit professional eaters from around the world, including Guinness World Record-holder  Takeru Kobayashi from Nagano, Japan, against each other to compete for cash prizes and the coveted title of “Gringo Bandito Chronic Tacos Eating Champion.”

A portion of the proceeds will be donated to the Doheny State Beach Interpretive Association (DSBIA), which is dedicated to the protection of the park. Sabroso will also partner with the Big Brother / Big Sister program. This event is all ages, children 7 and under free with adult admission. General Admission single day tickets start at $49.50 and VIP tickets are available for a single day starting at $109.50. Two day passes start at $89.50 with Two Day VIP from $209.50. There are also numerous upgrades available, including an “Eat and Greet.” 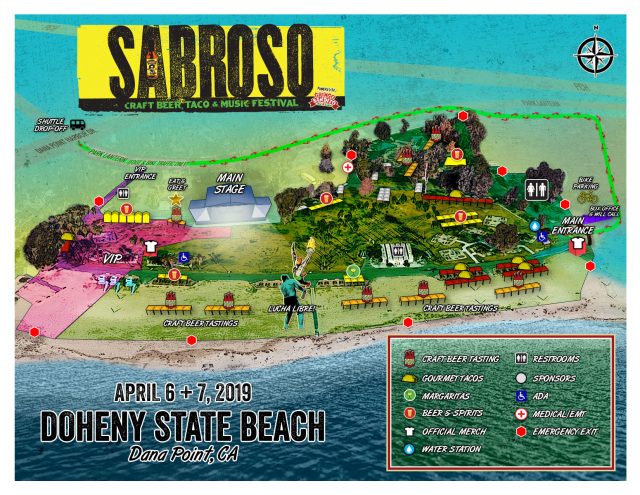 Born and raised in the great city of Los Angeles, this food, culture and music-loving punk rock angeleno wants to turn you on to all that is funky, delicious and weird in the city. While Elise holds down the fort, her adventurous alter ego Kiki Maraschino is known to roam the country in search of catfish.
View all posts by Elise Thompson →
This entry was posted in Cocktails, Beer, Wine & Weed, Food, Music, Upcoming Events. Bookmark the permalink.