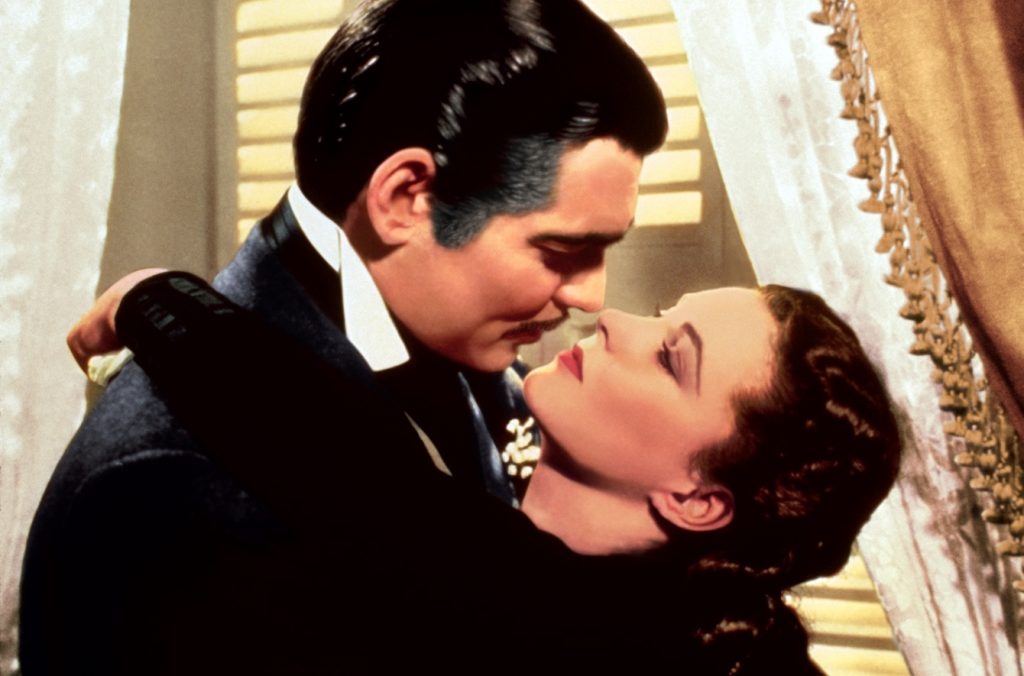 The LA Beat was lucky enough to catch one of only four screenings of 1939’s legendary “Gone With the Wind” on the big screen last week. In celebration of its 80th anniversary, Fathom films presented the historic movie and its epic depiction of war, shown as requiring massive strength, ingenuity, and wits.

The land! The mansions! The gowns! The dancing! The passion! The explosive race past a landscape on fire! The slavery. The rape. The murder. The maimed and dying soldiers. The abuse and exploitation of horses, and the prisoners.

Skin looks as luscious and vulnerable as real flesh in cinematic softening. Kisses and slaps feel real.  But along with the opulence and pageantry is juxtaposed the horrors of the era. Some scenes are impossible to watch, and the film has received much criticism for perpetuating the romanticization of rape and slavery. Yet “Gone with the Wind” is a crucial film to witness and closely read, every single minute of its four hours, if we are ever to fulfill the promise of its closing lines.

“Gone With the Wind” is based on Margaret Mitchell’s Pulitzer-Prize winning 1936 novel of the same name, and lavishly directed by  Victor Fleming. The story centers around Scarlett O’Hara, played by Vivien Leigh, who won an Oscar for her role, and Tara, her father’s romantically-named cotton plantation where slaves work in Georgia, as the Civil War descends.

Clark Gable plays Rhett Butler, the dashing scoundrel after Scarlett’s heart, Leslie Howard plays the man Scarlett thinks she loves, and Olivia de Havilland plays Scarlett’s saintly sister-in-law, Melanie. Butterfly McQueen plays a houseworker who travels with Scarlet. Hattie McDaniel plays Mammy, the houseworker who sees Scarlett as clearly as Rhett sees her, and Mammy isn’t afraid to say what she thinks. McDaniel also won an Oscar, the first African American to do so (the Academy Awards began in 1929, and McDaniel won the award in 1939). Every actor, no matter how short the screen time or few the words, is as impeccable and believable as the clothes they wear.

“Gone with the Wind” may be the most popular movie ever made. The movie received 10 Academy Awards™ (eight competitive Oscars™ and two honorary awards). Each year, an estimated 33,000 people visit Margaret Mitchell’s house in Atlanta to check out artifacts from the film, including set pieces. Before the film’s release, the casting search for Scarlett and Mammy made headlines, with various luminaries and hopefuls trying out. The film’s cost is legendary. The budget was originally $3.9 million, which made it, in 1939, the second most-expensive movie ever made. When adjusted for inflation, it’s the highest grossing film of all time. The American Film Institute lists “Gone With the Wind” as #6 of the 100 greatest American films of all-time.

The film tells the story of several romances amidst the Civil War, and several catastrophes. It also tells the story of changing social standards, and how difficult it is to change entrenched social mores. Sex workers and domestics uphold their outsider status even as they find just a little bit of freedom and power within it, and people who were once oppressed, upon gaining power, exploit others. This makes the final lines of the film all the more profound and hopeful. What comes after the film ends might be the best scene of all, if we movie-viewers can learn from this film and its depiction of our grievous history, and transcend our inclinations to be predatory, cruel, and selfish. “After all, tomorrow is another day.”

Wild interests and an inclination to rage against the machine with a flair that could equal the groupies and rock stars who fascinate her, writer and artist from Kentucky, Lucretia Tye Jasmine, earned an MFA from CalArts (2006), and a BFA from Tisch (University Honors Scholar, 1988). Alien She, the Museum of Broken Relationships Hollywood, the Fales Special Collections Library at NYU, the Getty Center, Joanie 4 Jackie, MoPOP, the New York Times, and The Punk Museum Los Angeles have featured her work. Recent publications include essays in "Women Who Rock: From Bessie to Beyoncé, Girl Groups to Riot Grrrl," edited by Evelyn McDonnell (2018), and "Let It Bleed: How To Write A Rockin' Memoir," edited by Pamela Des Barres (2017), with online writing for Please Kill Me, Medium, and PRISM international. Current projects are the oral history mixtape zines: "riot grrrl Los Angeles 1992-1995," and "The Groupie Gospels."
View all posts by Lucretia Tye Jasmine →
This entry was posted in Movies. Bookmark the permalink.