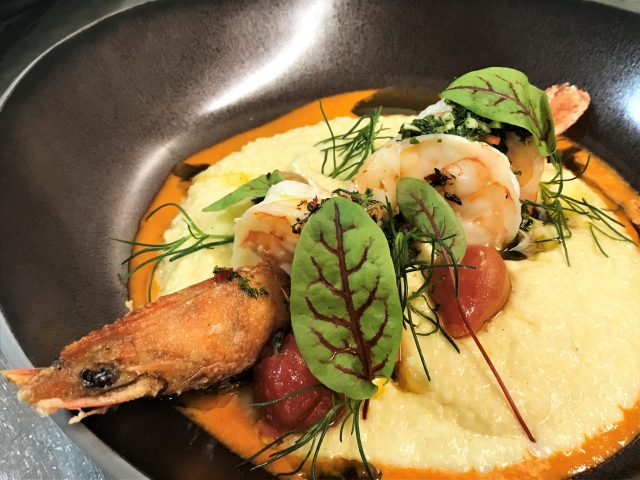 WARNING: PHOTOGRAPHY IS STRICTLY FORBIDDEN IN THE MAGIC CASTLE. I HAD SPECIAL PERMISSION TO TAKE PHOTOGRAPHS, BUT ONLY IN THE KITCHEN. SERIOUSLY, THE ENTIRE ROOM WILL YELL AT YOU.

Ever since the April announcement that Chef Jason Fullilove of Barbara Jean was taking over the staid dining room at The Magic Castle, I have been chomping at the bit to get myself in there. The Magic Castle is a private club, and you have to be invited by a member or a performer. When I had a friend who worked at the front desk in the 90s I used to hang out in the bar post-Yamashiro’s, but honestly, before this visit, I had not eaten in that dining room since attending a bar mitzvah there in 1977.

I have been a longtime fan of Chef Fullilove, having eaten his special dishes at charity food events for many years. Particularly memorable was an intense curry fried chicken at “Stu and the Kids” last year. At the Magic Castle last week, I was excited to see the Vadouvan Fried Chicken Bites on the bar menu–a variation on a dish from Barbara Jean.

Vadouvan is a French take on Masala, and the chicken bites were further enhanced with kimchi and sriracha aioli. I was so excited that it was on the bar menu that I placed an order and ate the chicken while I waited for my dinner reservation. It was a good thing too, because the chicken bites aren’t on the dinner menu. The chef has created a freestanding bar menu that would satisfy any hungry diner, with a few dishes from the dinner menu and special munchies like hamburgers, a cheese plate, and the popular carne asada street tacos. 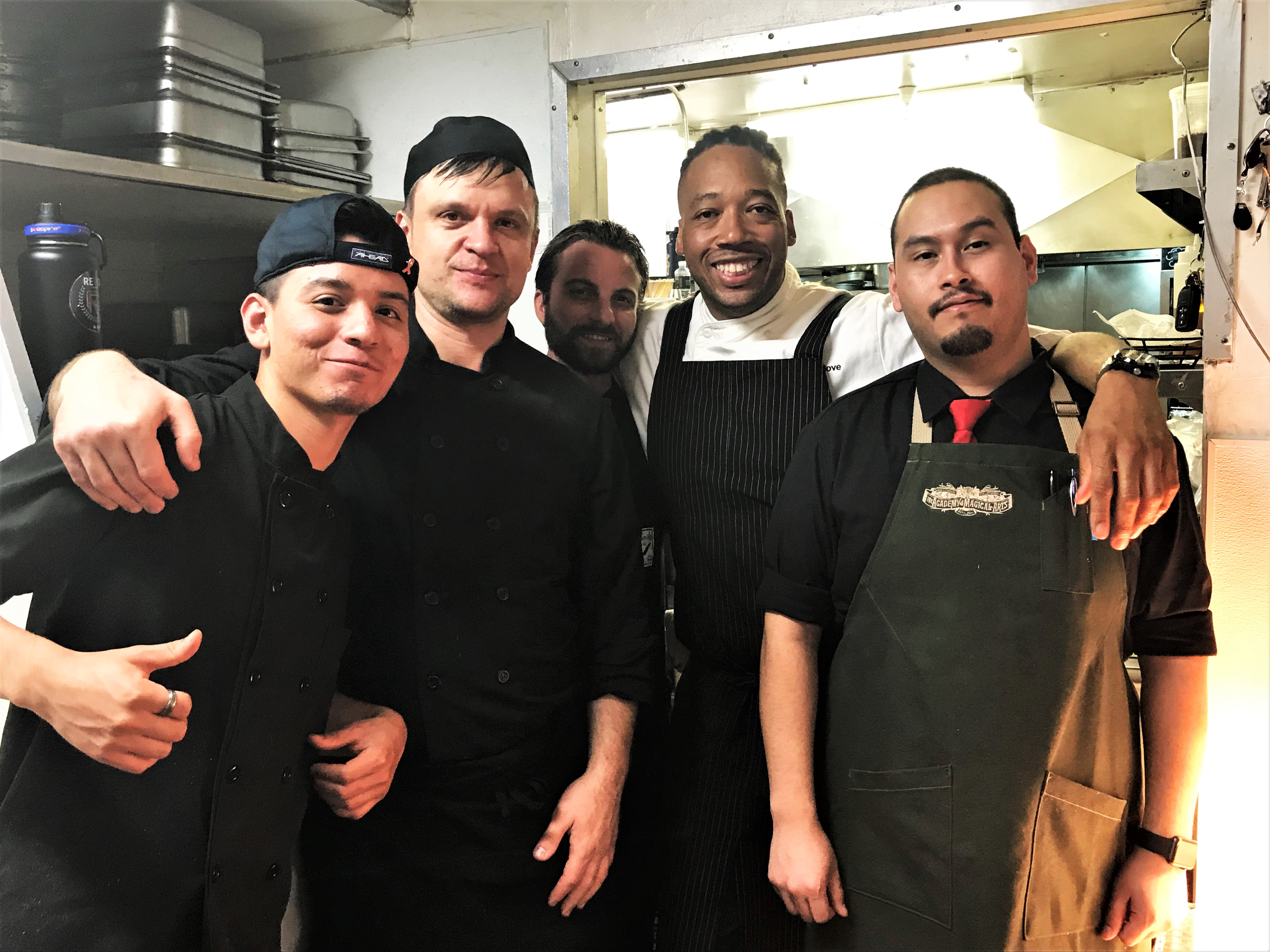 Chef Fullilove, second from right, and his team in the kitchen at the Magic Castle.

Chef Jason Fullilove was born in Cleveland, Ohio, and has spent time in Southern Africa and the Caribbean. But he has made Los Angeles his home. The spices of his travels have given him solid flavors to combine with California’s fresh, local, farm-to-table movement. At Barbara Jean, now located in The Fields food hall, Fullilove celebrates his mother and his midwestern upbringing with seasonal American soul food with a little touch of New Orleans.

In the Magic Castle dining room, it’s strange to see such old-fashioned dishes as Oysters Rockefeller, Prime Rib, Rack of Lamb and Beef Wellington on a menu developed by such a vibrant chef, who is perhaps best known for his complex spices and world flavors. Fullilove explained that one objective with a restaurant of that caliber is to make sure everything was made with the highest quality, locally sourced, fresh and sustainable ingredients. He is slowly updating the menus, and will soon start on updating the buffet brunch. I think I had better give some of my old magician friends a call.

Even with the number of menu items that have been grandfathered in, you can definitely see the Chef’s deft hand all over the place, especially with ingredients like za’atar spice, maple mustard, piquillo pepper purée, tamarind BBQ sauce, and smoked coconut. 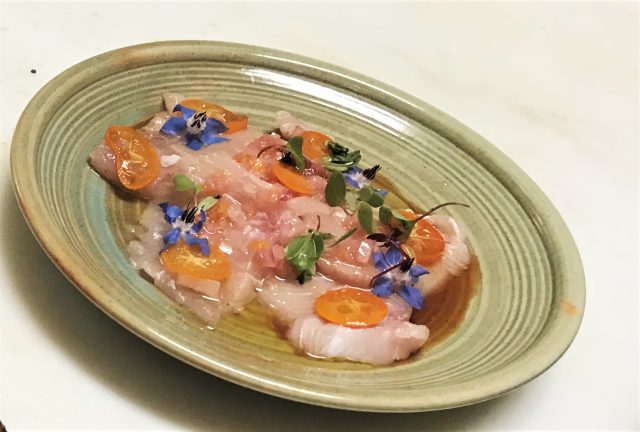 There is no pork in any of the dishes save one, and although the crustacean-heavy menu is far from kosher, there are plenty of options for people with religious dietary restrictions. The chef is considerate of all diners, with special seasonal dishes for vegetarians and vegans. Chef Fullilove even pointed out some dishes for those on the au courant keto diet.

After I placed my order, the chef said he would send out a few dishes for me. I did not anticipate the riches that arrived, each dish more beautiful than the last, a bounty that caused nearby diners to change their orders. First was the Cured Hamachi Crudo, a simple dish updated with the curing. Yuzu, shoyu, and blood orange relish did not teeter into becoming overly sweet, and the sharp bite of the kumquats made the dish.

The house’s expertise with lesser-known cooking methods really shone through in the Smoked Ora King Salmon on Sourdough. I was anticipating the salty, overly-brined, fishy lox we have all become accustomed to. Not in The Magic Castle. No way. The generous layers of salmon were cool and velvety, with a texture that thrilled me as my teeth sunk in. I have never experienced something like that before. Pairing it with burrata instead of the familiar gloppy cream cheese allowed the subtle salmon to be the star, adding both a freshness and a richness to the dish. A little Meyer Lemon and avocado also brightened up the fish, while a spoonful of salmon caviar brought in that little bit of saltiness that one expects from salmon, but in a carefully controlled way. 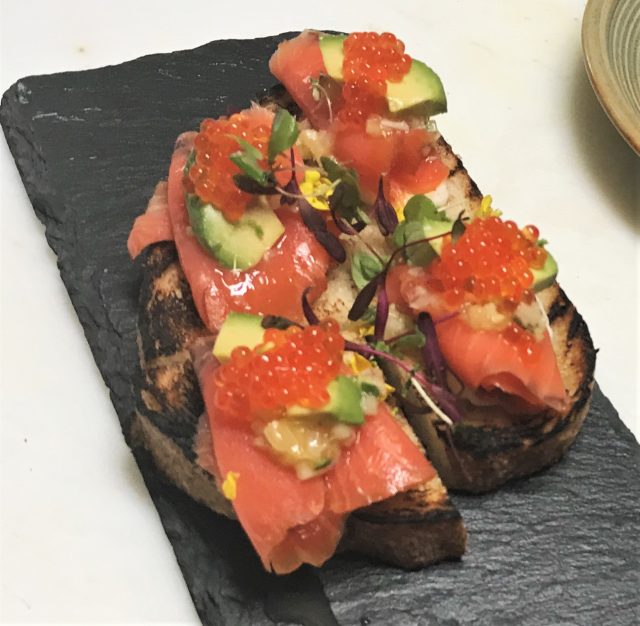 The third dish was technically a side, not an appetizer, but who is asking questions at this point? The Cheddar Jalapeno Hush Puppies may have been my favorite dish. The fried exterior remained crisp and crunchy in spite of the fact that the whole thing was soaked in truffle honey. The caviar didn’t detract from the sweetness, but added a little luxury to what might be considered a “down home” dish.

The soup of the day was Clam Chowder, as is expected on a Friday, but the Thai Curry Crab Bisque had Chef Fullilove’s name on it, and I knew it would be good. The coconut milk broth was rich with the flavor of seafood shells that had simmered all day. The spicy red curry didn’t pack the punch that I expected, which was a good thing. Too often heat overpowers flavor. With the brightness of citrus, which I’m recognizing as a pattern, the deep, dark soup became even more complex. Think of the most tender and delicate thing you have ever eaten, and I promise you the chunks of crab in this bisque were more tender and more delicate than that. They were in chunks because you could tell that they were carefully placed in the soup at the last minute, not stirred in, which would break them up. It is that kind of care and mindfulness that makes all the difference.

My main dish of Wild Pacific Prawns on creamy white polenta reminded me of a version  of Shrimp ‘n’ Grits Chef Fullilove presented at LA Food and Wine several years ago. As the chef explained the dish to me, I said, “So…shrimp and grits…”

He gently corrected me, “Prawns and polenta.” The dish was laid out like fine art, with a fried prawn head and tail bookending tender, meaty prawns. I am used to sucking crawfish heads, and I am aware many people eat the heads of smaller shrimp, but the size of this prawn was daunting. I took an exploratory bite of the head, and it was delicious, but the cartilage made it too difficult to eat. The polenta was smooth, and the aji amarillo was carefully placed on the outer edge of the plate so that you could dip into it and swirl as much heat as you wanted into the polenta. The poached cherry tomatoes were a welcome surprise, bursting with flavor and giving your mouth the chance to come back to the prawns and polenta afresh. Like a reverse palate cleanser. 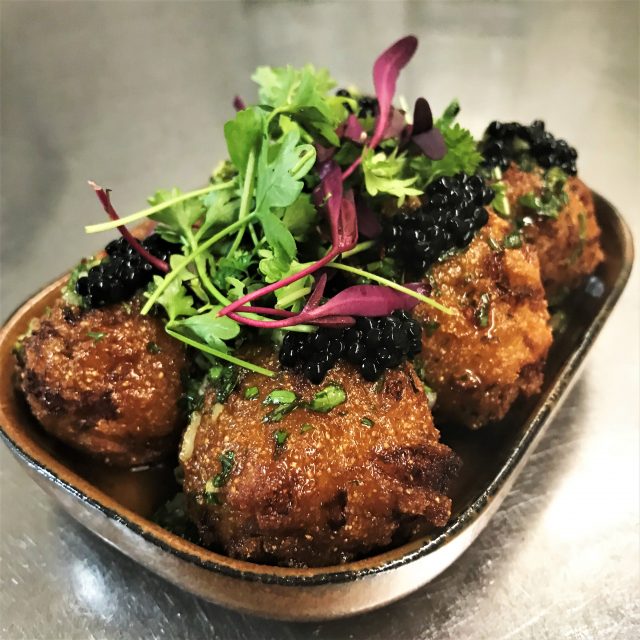 The desserts were homey and tempting, with Banana Cream Pie and Doughnuts intriguing me the most. The bananas in the pie were drowned in a thick pastry cream that wasn’t too sweet, because the Nutter Butter crust was very sweet. Who would have expected Nutter Butter at a white tablecloth restaurant? Just one more example of  the chef’s ability to combine comfort food with haute cuisine.-D

As expected, the service was flawless–attentive but not intrusive. House rules demand that every diner must order a main dish, disappointing to those people who prefer making a dinner of two appetizers. A meal with a starter, main dish and dessert will set you back about $100 bucks–not bad for a place like this, especially because you get free magic shows after dinner. The Magic Castle even has a “Food Check” where they keep your leftovers refrigerated during the shows and have them waiting at the exit. You know I ate hushpuppies and caviar for breakfast!HICKEN   3

When Eater LA announced the chef’s new position, the headline was, “Hollywood’s Timeless Magic Castle Gets a Surprising New Executive Chef.” But it’s not surprising at all to me. Chef Fullilove has previously overhauled themed special occasion restaurants at Clifton’s, LACMA, and Castaway in Burbank, as well as fine dining kitchens in noted restaurants like Patina and Campanile. But the real reason this place is such a perfect fit for this chef is because Jason Fullilove is magic.

A portion of the food was comped. 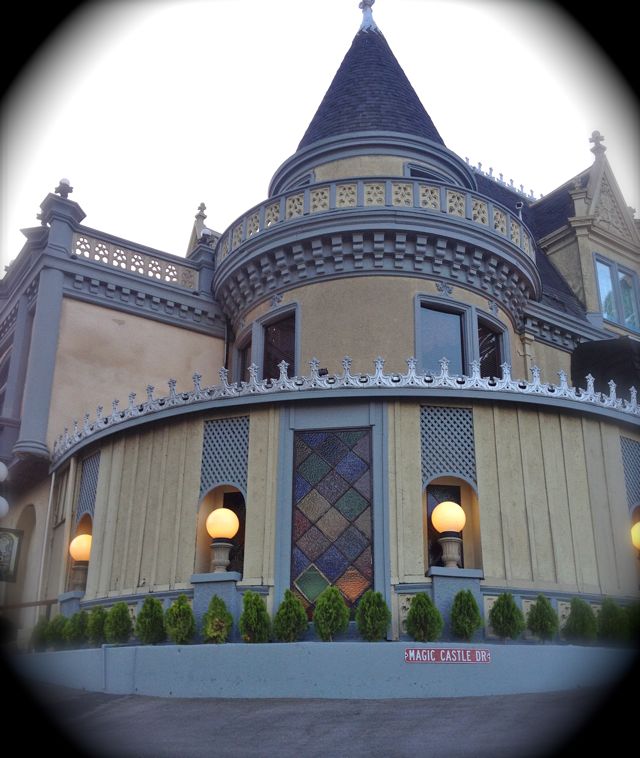 Born and raised in the great city of Los Angeles, this food, culture and music-loving punk rock angeleno wants to turn you on to all that is funky, delicious and weird in the city. While Elise holds down the fort, her adventurous alter ego Kiki Maraschino is known to roam the country in search of catfish.
View all posts by Elise Thompson →
This entry was posted in Attractions, Cocktails, Beer, Wine & Weed, Food and tagged Chef Jason Fullilove, The Magic Castle. Bookmark the permalink.