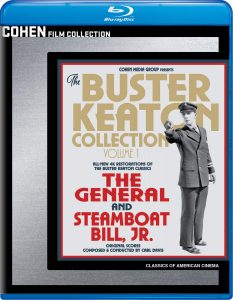 “The Buster Keaton Collection, Volume 1: The General/Steamboat Bill, Jr.” (1926/1928, Cohen Media Group) Two of Keaton’s final features made under his own independent production shingle, and though both were box office failures at the time of their release, they’re now seen as two of the comedian-filmmaker’s most creative efforts. Keaton’s Everyman-against-the-world persona also gets two of his best (and most epic) showcases here: in “The General” (Keaton’s personal favorite of all his films), his railroad engineer, rejected from Confederate military service during the Civil War, redeems himself by single-handedly thwarting a Union plan to steal his train, while in “Steamboat,” his hapless college grad saves his steamboat captain father (Ernest Torrence) and true love (Marion Byron) from financial ruin and a colossal tornado. Keaton’s gift for physical comedy is well-served here by a slew of astonishing set-pieces – the recapture of the train and its eventual wreck in “The General,” and the collapse of a building’s façade that misses Keaton only by virtue of an open door. But the gags, both big and small, that precede and follow these moments are equally well-crafted – Keaton riding the train’s cowcatcher, his impassive face barely the real danger he faces as he hurls railroad ties to move it off the track – that underscore his brilliance as a director and a comic. Cohen’s Blu-ray presents both films in 4K restorations and includes brief comments by Quentin Tarantino, Leonard Maltin and others, all of which are culled from Peter Bogdanovich’s excellent “The Great Buster” doc. 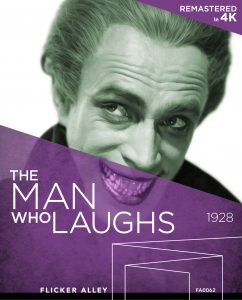 “The Man Who Laughs” (1928, Flicker Alley) Conrad Veidt plays the titular role in this long-unseen melodrama by German Expressionist director Paul Leni. Mutilated because of his father’s opposition to King James II and left with a permanent, leering grin, Veidt’s Gywnplaine becomes a sideshow performer and secretly pines for the blind Dea (Mary Philbin, “The Phantom of the Opera”); complications arise when Gwynplaine discovers that in order to regain his father’s estate, he must marry the sexually voracious Josiana (Olga Baclanova, “Freaks”). Though intended as a romance-adventure, this adaptation of Victor Hugo’s novel is usually considered as an auxiliary part of Universal’s horror canon due to its macabre subject matter and imagery (Veidt’s facial makeup, designed by Jack Pierce, would inspire Bill Finger, Bob Kane and Jerry Robinson, the creators of the Joker) as well as Leni’s use of shadow and distorted framing and Charles D. Hall’s Gothic set design, which would inform the visual palette of the studio’s horror efforts in the 1930s. Flicker Alley’s expertly restored Blu-ray includes a new score from the Berklee School of Music and the original synced score from the 1928 re-release, as well as essays by historian John Soister and silent film expert Kevin Brownlow and a wealth of rare production stills and beautiful promotional art. 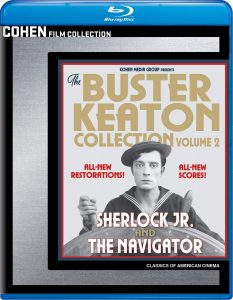 “The Buster Keaton Collection, Volume 2: Sherlock Jr./The Navigator” (1924, Cohen Media Group) Two more restored Keaton features, the former a remarkable marriage of film form, visual effects and his physical comedy, and the latter a stellar showcase for his inventive setpieces. Both films offer riffs on Keaton’s doleful-eyed naïf persona: in “Sherlock,” he’s a hapless projectionist who finds the solution to his romantic dilemmas by literally stepping into the role of a movie hero, while in “Navigator,” impulsive rich kids Keaton and Kathryn McGuire (also in “Sherlock) grow up fast while honeymooning on a colossal, deserted ocean liner. “Sherlock” is perhaps Keaton’s most technically accomplished film – a meta experience before there was meta, it explores how movies can impact and change a viewer by inserting Keaton into a dizzying barrage of clips, to which he must respond with lightning reflexes; these moments, combined with some astonishing stunts (including the train/waterspout gag, which left Keaton with a broken neck) and visual effects (Keaton leaping into the screen and jumping into a suitcase) that make “Sherlock” one of his most exhilarating film experiences. Critics of the day, however, didn’t agree, which doomed “Sherlock” at the box office, but “Navigator’s” simpler premise and emphasis on gags – which are boundlessly inventive (the deep-sea diving setpiece alone is a small masterpiece) – combined with Keaton and McGuire’s charming on-screen relationship and the impressive (and very real) cargo ship set, provided him with his biggest hit. Cohen’s Blu-ray includes a variation on the interview clip extra seen in the previous set and restoration trailers for both films. 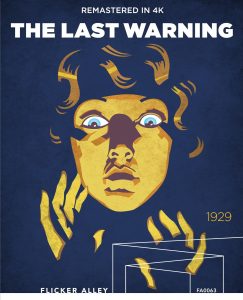 “The Last Warning” (1928, Flicker Alley) Five years after an actor dies during a stage production (and his body goes missing), producer Montagu Love invites the original cast to reprise the show, which is immediately plagued by mysterious phenomena, including threats from an unseen and possibly undead menace. Old Dark House-style thriller reunites director Paul Leni and actress Laura La Plante, who previously teamed for 1927’s “The Cat and the Canary,” to which “Warning” bears a strong resemblance. What enlivens the action is Leni’s restless camera and a surfeit of Gothic trappings, from Charles D. Hall’s sets (which utilize sections of the Opera House from “Phantom of the Opera) to enough hidden passages, clutching hands, and nervous walks down gloomy passages to fill an entire collection of Edward Gorey‘s art. Based on a Broadway play which was, in turn, adapted from the novel by Madeleine L’Engle‘s father, Wadsworth Camp; Leni died from blood poisoning eight months after the film’s release. Flicker Alley’s restored Blu-ray includes essays by John Soister and an array of rare production stills and advertising art.

Paul Gaita lives in Sherman Oaks, California with his lovely wife and daughter. He has written for The Los Angeles Times, LA Weekly, Variety and The Fix, among many other publications, and was a home video reviewer for Amazon.com from 1998 to 2014. He has interviewed countless entertainment figures from both the A and Z lists, but his favorites remain Elmore Leonard, Ray Bradbury and George Newall, who created both Schoolhouse Rock and the Hai Karate aftershave commercials. He once shared a Thanksgiving dinner with celebrity astrologer Joyce Jillson, and regrettably, still owes the late character actor Charles Napier a dollar.
View all posts by Paul Gaita →
This entry was posted in Movies and tagged Buster Keaton, Cohen Media Group, Flicker Alley. Bookmark the permalink.

One Response to Movies Till Dawn: More Silents, Please