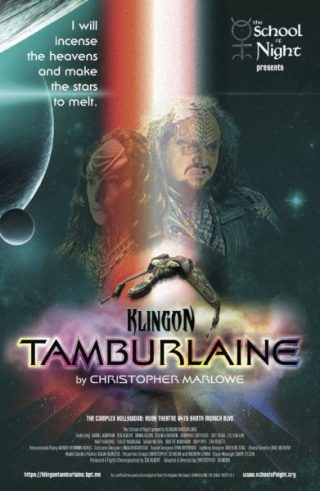 Director Christopher Johnson and The School of Night have brought back their Hollywood Fringe Festival 2019 production of “Klingon Tamburlaine” to the Ruby Theater the Complex Hollywood, playing until Saturday, November 9, 2019.

Together, with loads of hand-to-hand combat drama and some unique puppetry, is a brilliant marriage of a Christopher Marlowe classic and Star Trek lore in this unofficial adaptation of Marlowe’s “Tamburlaine the Great, Parts I and II.” 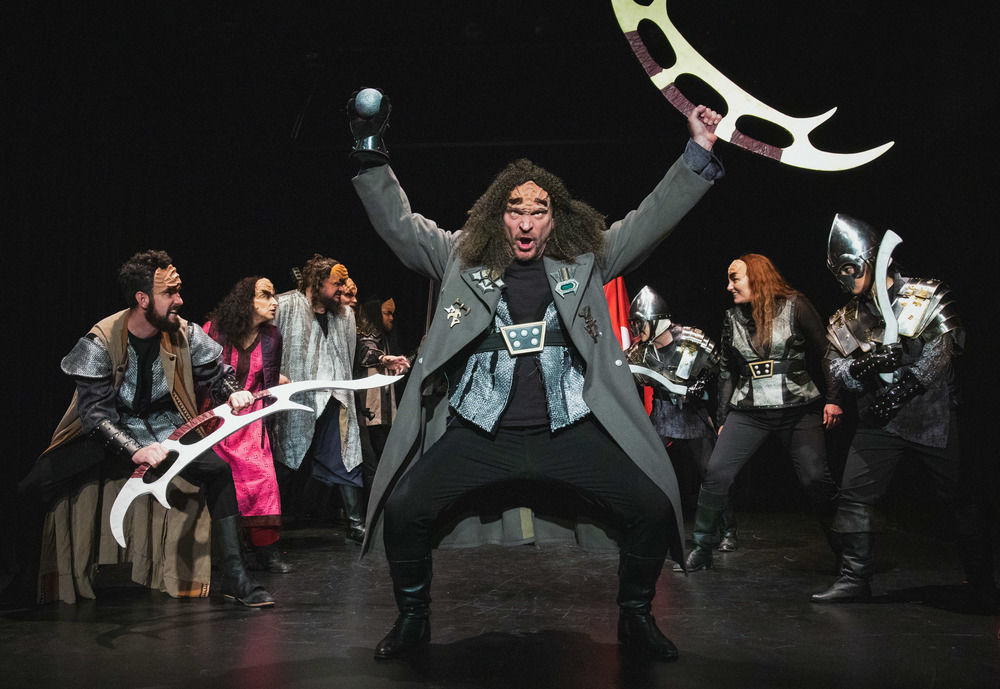 Matt Harding, as Tamburlaine, presents a confident and formidable shepherd who has risen in infamy as a “dread bandit-warlord of the Central Plains of Qo’noS.” Intent to defeat and dethrone emperor Mycetes, played by Jeff Doba, win over his lords and generals, and rule the cosmos. Tamburlaine attacks planet after planet, working his way across the Neutral Zone. As the Romulan Empire watches, fearful, they forge an alliance with their mutual foe, the Federation.

Kabuki and Noh drum and percussion, played exquisitely by Wendy Heimann-Nunes, sets the perfect and tone, accentuating the drama throughout, especially for the battle scenes. The play is rich with costumes, with many quick changes, thorough make-up, and loads of well-timed sound effects and colorful lighting design.

The highlight of the production is the hand-to-hand and Klingon weapon combat choreographed by Producer and Choreographer, Jen Albert, along with unique and stylized “battleship clashes” in the galaxy.

After the show, the cast and crew made their way to Scum and Villainy in Hollywood for an after-party, where they proceeded into a spirited version of a Klingon war cry during their celebration. There, Johnson and Albert spoke on the production, their trek from Chicago, and how it all came to be.

Johnson, after years producing theatre with his company Defiant Theatre in Chicago, along with Albert, made their way to Los Angeles to create theatre. Johnson wrote a few scripts, and eventually, Theatre of Note gave him an opportunity a show called ‘Entropy’ about the space program in the ’70s, which is where he experimented in model work, miniature work and a “rocket launch.”

The show “got a lot of attention,” he said. Then they begin producing at the Hollywood Fringe in 2016, where they, as a company, brought such productions as “Punch and Judy,” “The Faggot King or The Troublesome Reign and Lamentable Death of Edward II,” and “Hercules Insane.”

In addition to being a long-time Star Trek fan, and having directed Shakespeare and editing a substantial amount of classical theatre for production since college, Johnson had a lot of resource material on hand to bring the script together for “Klingon Tamburlaine.”

“In terms of adding Star Trek stuff in, I have been a Trekkie since the ’70s, so I know that Star Trek [canon] backwards and forwards,” he said. “There’s tons of reference stuff out there. I have a travel Guide to the Klingon Empire. I’ve got multiple books about Klingon Culture.”

“I get all the classical references and all the Christian references, so it was easy for me to look at,” he continued on when it came to inserting references to Klingon beliefs and lore in the text. 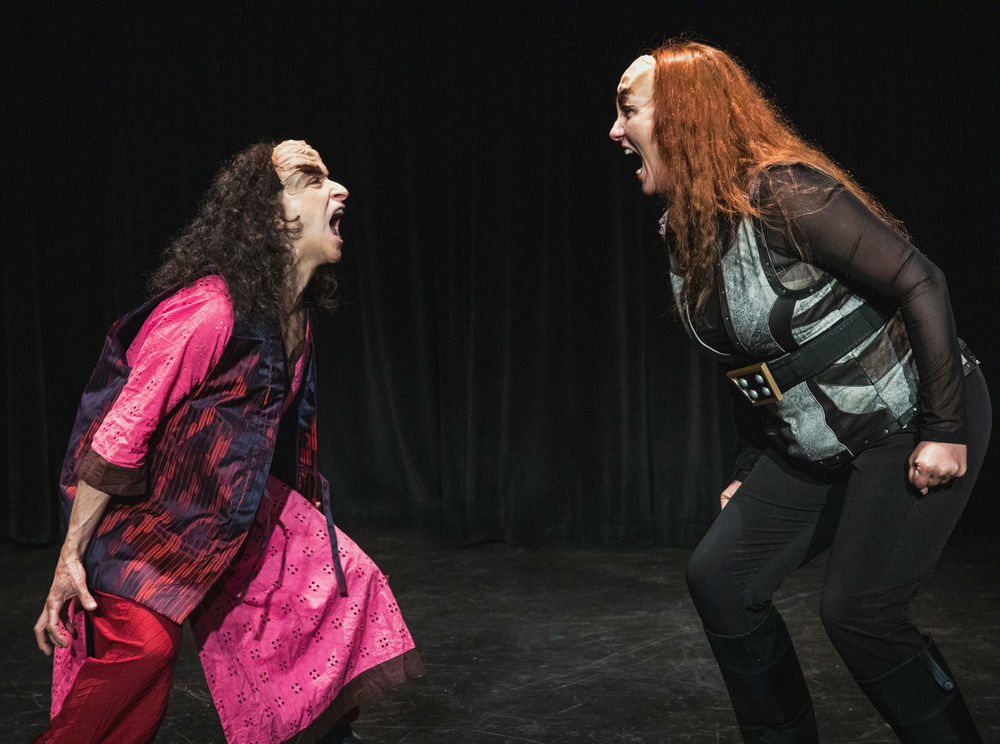 Jen Albert as Zenocrate, Left, and Dawn “Sam” Alden as Zabina, in Klingon Tamburlaine. Photo courtesy of The School of Night.

On incorporating Klingon combat and battle into classical theatre, Johnson said, “I think we’re are at a point where we can show tactics and strategy, and how a battle is unfolding, in like a super stylized but simple way.”

Albert, who also plays Zenocrate  and has since been nominated for an Ovation Award for the upcoming 30th Annual ‘LA Stage Alliance Ovation Awards for her work in “Suckerpunch,” trained in Chicago at Columbia to learn “every weapon she could,” before joining Dawn “Sam” Alden, who plays Zabina and is also member of the School of Night, in the theatre company Babes with Blades, which Albert said was formed largely because women did not get the opportunity to use their stage fight training often.

“You’d learn all this stuff,” said Albert. “And then you’d play the victim!”

Although there are books on Klingon training and Vulcan Martial Arts, Albert said there was not so much on Klingon hand-to-hand fighting tactics, specifically in using the menacing Bat’leth, so she used logic and imagination.

“There is no instruction on how to use a Tik’leth or Mek’leth,” she said. “The research was essentially, ‘Alright, I have this kind of a weapon. What is the most logical way to use it?’”

There is also a “zero-gravity fight,” which presented unique choreographic challenges for Albert. Highly satisfied with the result, she shared on her approach to it with the actors.

“It’s ridiculous but amazing. They do it so well!,” she said. “Let’s talk about what zero gravity is. It is not slow motion. It moves very quickly!”

“I am a full-on classics geek,” said Johnson. “With theatre, I really like classical stuff. I feel like classical stuff is from a time when theatre was ‘The Show.’ Like it was ‘the thing,’ and I think there’s so many lessons to be learned from the way that they mastered the craft.”

“I think it’s all alive. I think if you really connect to it–if you get what’s vital about it and you dig into the meat of it—and if you embrace the idea of stuff that’s really stylized and stuff that isn’t interested in being realistic in the Stanislavskian sense,” said Johnson. I think the stuff is style alive and can be made really exciting.”

Financially, Johnson said that the company is not quite there yet to do all the shows they would like to.

“We would like to get to the point where we can do Fringe every year and maybe one show outside of Fringe,” he said. “After having gone those first few years In L.A of not getting to do much theatre in L.A. at all and being starved [of it], just getting to do one great show are year, that’s something, man! That’s more than a lot of people get.”

Monique A. LeBleu is a writer, photographer, videographer, and shameless foodie and wineaux. A love of film history and a background in film production, post-production, and film theory provide unique insights into her movie reviews. As well, a background in technical theater fuels her passion on all-things theater. As a foodie, living in the ever-growing and diverse culinary landscape that is the City of Los Angeles feeds her never-ending pursuit of the perfect comfort food—the world's best Mac n' Cheese!
View all posts by Monique A. LeBleu →
This entry was posted in Books, Theater and tagged Christopher Johnson, Christopher Marlow, classical theatre, Jen Albert, Klingon Tamburlaine, Ruby Theatre, School of Night, Star Trek, The Complex Hollywood. Bookmark the permalink.