Theater Review: Death with Dignity Comes in a Milkshake 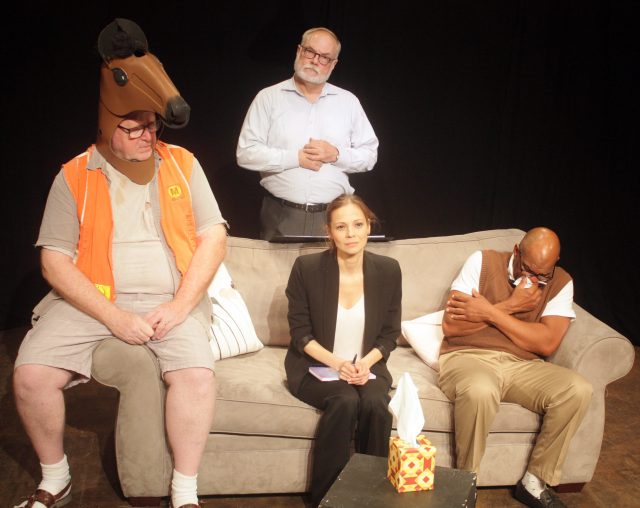 A gritty, funny new play, “Death with Dignity Comes in a Milkshake,” recently opened at one of my favorite places–Theatre 68 in NoHo. The eclectic play is written by Sam Henry Kass (“Star-ving”), and directed by acclaimed Theatre 68 artistic director/actor Ronnie Marmo, still riding high from the success of his hit play, “I am not a Comedian…I am Lenny Bruce.”

The cast is top notch and features General Hospital thespian Tamara Braun as a therapist who finds herself in a very strange position when several male clients without appointments unexpectedly commandeer her office. The  colorful patients are played by four talented actors–Hansford Prince, Paul Jacek, Jonathan Moreno, and Thomas F. Evans (who is referred to in the play as “Horsehead”). The play is funny, shocking, and startling. The unique and original 90-minute one-act show zips along at a fast clip and is definitely worth taking in.

“Death with Dignity Comes in a Milkshake” runs Friday and Saturday nights with Sunday matinees through November 16, 2019. The show is co-producrd by Sarah Haruko, Molly Leach and Cortney Roles. Yasha Rayzberg does double duty as assistant director and stage manager. Theatre 68 is located at 5112 Lankershim Boulevard. Visit the website for tickets and more information.

This entry was posted in Theater. Bookmark the permalink.