Where to Celebrate Martin Luther King Jr. Day 2020 in L.A. 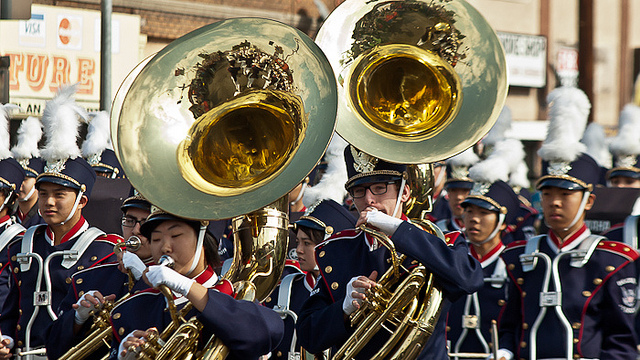 This year Martin Luther King Jr, Day will be celebrating King’s 91st birthday. You can choose to observe the holiday as solemnly or as joyfully as you choose. There are a variety of events happening all across Los Angeles this weekend.

This year’s theme is “Walk the Talk.” The 32nd annual Long Beach Parade starts at Anaheim St. and MLK Jr. Avenue at 10:00 , rain or shine, and culminates with a festival at King Park 1950 Lemon Ave., Long Beach from 11:30 a.m. until 5 p.m. Saturday’s festival includes food, games, music, and other festivities in honor of the park’s namesake. All ages. There will be free parking at Long Beach City College’s Pacific Coast Campus on the corner of Orange Avenue and 19th Street with a free shuttle to the event.

The city of Inglewood has planned an entire day of events for January 18, from a religious service in the morning, to a joyful parade and festival.

11:15 a.m.: Parade Begins – Staging at The Tabernacle. Route along Manchester Blvd. (from Eucalyptus to Hillcrest Blvd.)

From 11 AM until 5 PM Saturday the City of Inglewood will be blocking off North Market Street  from Regent on the North to Kelso on the South. “The hottest street festival of the season” will feature food trucks, exhibit booths, a kids zone, a classic car show and a two stages of live music brought to you by Hannibal Media Group. Performers include Jon B., Mali Music Jimetta Rose Music, Tia P., Las Chikas, The Reel Band, Sonna Rele, Funkalicious, and J.Boykin

If you want to observe MLK Jr. Day as a day of service, but don’t want to mis the fun festivals on Monday, you can participate in a service activity on Saturday, January 18, 2020. Mujeres de la Tierra, the County of Los Angeles Department of Parks and Recreation, Baldwin Hills Conservancy, Los Angeles Audubon, Sierra Club and North East Trees will be organizing the 6th annual MLK Day of Service at Kenneth Hahn State Recreation Area. From 8am – 1pm, volunteers of all ages will work on restoration and beautification projects and tree planting, Breakfast will be provided. Don’t forget comfortable and sturdy shoes, work gloves and a reusable water bottle. Parking fee will be waived for all volunteers. 4100 S. La Cienega Blvd., Los Angeles 90056. 323-298-3660.

The Kingdom Day Parade in South LA features floats, celebrities, beauty queens, bands, equestrian teams, and our favorite – drill teams. Starting at 10:00 a.m. PST at Western and MLK Blvd., the three-mile parade route runs down MLK Blvd. to Crenshaw Blvd., where it turns left and then ends at Vernon Avenue. Actress and television host Keke Palmer of ABC’s “GMA3: Strahan, Sara & Keke” will be the grand marshal. the parade will be broadcast and streamed live on abc7 Monday, Jan. 20 (11:00 a.m.-1:00 p.m. PST), in Los Angeles. ABC7 Eyewitness News anchors Michelle Tuzee and Leslie Sykes will perform host duties for this year’s parade, which is themed “Equality For All Humanity, Our Next Step.”

The festivities will continue after the parade at the Kingdom Day Freedom Festival in historic Leimert Park. Beginning at 11:00 a.m., there will be booths, food, community resources and music throughout the day until 5:00 p.m.

This year The Martin Luther King Jr. Day Celebration at the California African American Museum in Exposition Park will also commemorate the 55th anniversary of the Voting Rights Act of 1965. From 10 AM until 5 PM. celebrate Kingdom Day with “art, culture, and community.” A variety of interactive art installations, exhibitions, crafts, plus recordings and recitations of MLK’s inspiring speeches and sermons, make this annual event a huge draw for kids and adults alike. There will also be food trucks and the Inner City Youth Orchestra of Los Angeles will present a musical tribute to MLK and the passage of the Voting Rights Act of 1965. The program will include discussions about civil rights and this year’s election. The League of Women Voters will on site registering people to vote.

“Make it a day on, not a day off” is the theme of Americorp’s drive to encourage  Americans to use this day  to volunteer to improve their communities. The Corporation for National and Community Service has a database where you can search for local volunteer opportunities. Check it out here.

Born and raised in the great city of Los Angeles, this food, culture and music-loving punk rock angeleno wants to turn you on to all that is funky, delicious and weird in the city. While Elise holds down the fort, her adventurous alter ego Kiki Maraschino is known to roam the country in search of catfish.
View all posts by Elise Thompson →
This entry was posted in Art, Food, Music, Upcoming Events. Bookmark the permalink.