Movies Till Dawn: Hell Comes to the Saturday Morning Strange 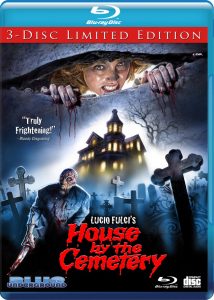 “House By the Cemetery” (Blue Underground, 1981) Despite constant admonitions from a young girl that only he can see, towheaded Bob (Giovanni Frezza) and his parents (Catriona MacColl and Paolo Malco) not only remain in the Creepy Old New England House formerly occupied by Malco’s colleague – whom, it should be mentioned, was one-half of a murder-suicide in the house – but also decide to find out for themselves who, or what, is making those unsettling noises in the basement. Italian-made blend of haunted house chills and the full-bore splatter on which director Lucio Fulci earned his cult following; the plot is largely nonsensical, with parts culled from “The Shining,” “The Amityville Horror” and other supernatural thrillers, but Fulci’s gift for crafting a disquieting atmosphere through sound, location (lonely stretches of Massachusetts) and pacing, as well as some exceptionally grisly set pieces (a gonzo bat attack on the family, the fate of sinister housekeeper Ania Pieroni and real estate agent Dagmar Lassander), make this a worthy creepshow companion to Fulci’s “Zombie” and “The Beyond.” Blue Underground’s three-disc Limited Edition is a Fulci fanatic’s dream, loaded with new material – including commentary by and an interview with Fulci scholars Troy Howarth and Stephen Thrower, respectively – and vintage extras: interviews with the primary cast, screenwriters Dardano Sacchetti and Elisa Briganti, cinematographer Sergio Stivaletti, the f/x crew, and even a full CD of Walter Rizzatti’s icy electronic score. 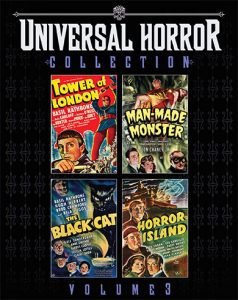 “Man-Made Monster” (1941, Shout! Factory) An ability to withstand electrical shock makes sideshow performer Dynamo Dan (Lon Chaney. Jr.) an ideal test subject for mad scientist Lionel Atwill, who uses high voltage to turn the affable lug into a homicidal, luminescent zombie. Effective science fiction/horror hybrid from Universal marked the beginning of Chaney’s horror career, which took off shortly thereafter when he re-teamed with “Man-Made” director George Waggner for “The Wolf Man.” At 59 minutes, it’s too brief and budget-conscious to have the same impact as Universal’s original run of famous monsters, but Chaney and Atwill do well as sympathetic brute and elegantly sinister medico – roles usually slotted for Boris Karloff and Bela Lugosi, for whom this project was initially intended. Shout Factory presents “Man-Made Monster” as part of its “Universal Horrors Collection Vol. 3” Blu-ray (more on that in a future post) and includes commentary by historians Tom Weaver and Constantine Nasr, who dish on Chaney’s horror c.v. 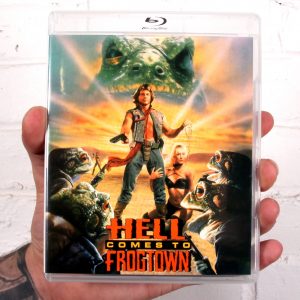 “Hell Comes to Frogtown” (1987, Vinegar Syndrome) You may (or may not) be pleased to know that in the event of a nuclear apocalypse, there will be some survivors: granted, they’re comprised of a platoon of paramilitary weapon, some man-sized mutant frogs and a few loners like exceptionally well-coiffured Sam Hell (the late, great Roddy Piper), whom the former corral into procreating to preserve the human race. Not perfect, but it’s something. Though the premise for this “Road Warrior”/spaghetti Western pastiche sounds tawdry, co-writer/director Donald G. Jackson is more interested in broad, cartoonish laughs, which he accomplishes through the absurd visuals (primarily Steve Wang‘s bulbous frogmen) and the game cast, led by Piper and featuring biker movie king William Smith, gung-ho soldier Cec Verrell and Rory Calhoun‘s out-to-lunch prospector. Vinegar Syndrome’s Blu-ray – a 4K restoration – includes commentary by the late Jackson and co-writer/producer/James Cameron collabator Randall Frakes and interviews with Piper and Wang, among others. 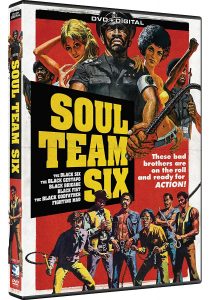 “The Black Six” (1974, Mill Creek Entertainment) A sextet of African-American bikers – all played by pro football players, including “Mean” Joe Greene, Mercury Morris and Lem Barney – come to the aid of leader Gene Washington when his brother is killed by a white supremacist gang led by burly ex-Oakland Raider Ben Davidson. Low-budget riff on the “Magnificent Seven,” filmed on location in Frazier Park by exploitation director Matt Cimber (a one-time husband of Jayne Mansfield), is lacking in every department, and even refuses to deliver a cohesive ending, much to the apparent dismay of the gridiron cast. Still, the leads – especially Washington and Morris – have an easy camaraderie, in spite of the leaden script, and the brawls are plentiful. “Black Six” is part of Mill Creek’s two-disc, budget-friendly “Soul Team Six” set, which includes “The Black Gestapo” and the TV movie “Black Brigade,” with Richard Pryor and Rosie Grier. 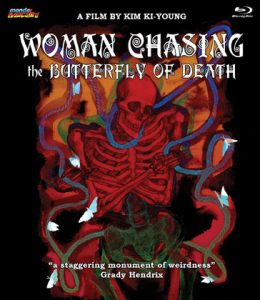 “Woman Chasing the Butterfly of Death” (1978, Mondo Macabro) Having survived a near-fatal poisoning, morose student Kim Jeong-cheol wants to finish the job by killing himself, but is constantly interrupted by, among others, a lunatic bookseller who claims that he can ward off death through will power (which he proves by surviving a stabbing, burial and cremation), an ancient female spirit who wants to eat his liver, and a grave robber in a homemade butterfly suit who mails the heads of corpses to Jeong-cheol’s boss and his unhinged daughter. Candy-colored freakout from Korean cult director Kim Ki-young, who generates arresting visuals and even laughs from a premise that’s up to its antenna in a fairly warped deathtrip vibe while also dodging anything resembling plot logic or cohesive storyline. Such a feat puts Ki-young in league with such diehard iconoclast-oddballs as Almodovar, Jodorowsky, Marins, and Teruo Ishii (which would make for a heck of a soiree); Mondo Macabro’s Blu-ray includes interviews with Ki-young’s frequent collaborator, actress Lee Hwa-yi (the liver-eating demon), cinematographer Koo Jong-mo and producer Jeong Jin-woo, all of whom do their best to make sense of Ki-young’s narcotic aesthetic.

Paul Gaita lives in Sherman Oaks, California with his lovely wife and daughter. He has written for The Los Angeles Times, LA Weekly, Variety and The Fix, among many other publications, and was a home video reviewer for Amazon.com from 1998 to 2014. He has interviewed countless entertainment figures from both the A and Z lists, but his favorites remain Elmore Leonard, Ray Bradbury and George Newall, who created both Schoolhouse Rock and the Hai Karate aftershave commercials. He once shared a Thanksgiving dinner with celebrity astrologer Joyce Jillson, and regrettably, still owes the late character actor Charles Napier a dollar.
View all posts by Paul Gaita →
This entry was posted in Miscellanious and tagged Blue Underground, Mill Creek Entertainment, Mondo Macabro, shout factory, VInegar Syndrome. Bookmark the permalink.