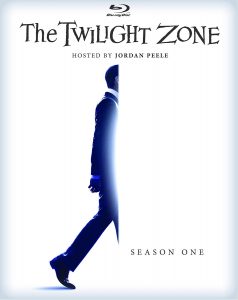 “The Twilight Zone (2019): Season One” (2019, CBS DVD/Paramount Home Video) The middle ground between light and shadow gets another revamp, this time from “Us” director Jordan Peele. The ten episodes in its debut season for the CBS All Access subscription service strive for the tone and intent of Rod Serling‘s original series, which mixed speculative fiction storylines with socially conscious themes; here, Peele examines race, toxic masculinity, the immigration issue, and other hot buttons through the prism of time travel, the pros and cons of wishes, alien visitors and other phenomena. The stories themselves are a mixed bag – some, like “The Comedian,” with Kumail Nanjiani, compare favorably to the original run, while others, like the man-pocalyptic “Not All Men,” sag under the weight of their moral lecturing (though it should be mentioned that Serling had, at times, a heavy thumb in that regard, too). Still, Peele’s intentions feel right, and his “Zone” succeeds far more often than other classic TV reboots and recent anthology series. CBS/Paramount’s four-disc Blu-ray set includes commentary by the producers (but not Peele) on several episodes, numerous making-of featurettes, extended and deleted scenes, and a tribute to Serling. 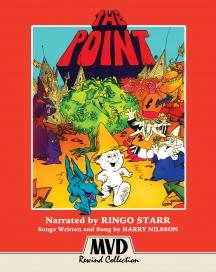 “The Point” (1971, MVD Rewind Collection) As the only round-headed resident of Pointed Village, where everything has a literal (and figurative) point, young Oblio (voiced by Mike Lookinland of “The Brady Bunch”) seems destined for trouble, which arrives in the form of a social-climbing, sourpuss count who arranges to have him exiled. But his wanderings help him to understand that there’s a certain merit to not being, doing or even looking like everyone else. Gently hallucinogenic animated TV special, based on Harry Nilsson’s 1970 album and narrated by Ringo Starr, is well-remembered and much-loved, thanks to Nilsson’s achingly lovely songs (“Me and My Arrow,” “Think About Your Troubles“) and a core message that remains relevant (perhaps even more so now). MVD Rewind’s 50th anniversary Ultimate Edition Blu-ray, culled from a 16mm transfer, mixes previously released material (a four-part making-of featurette) with new interviews with Lookinland, co-writer Norm Lenzer, Nilsson’s son Kiefo and musician Bobby Halvorson (who have presented a live touring version of “The Point”), and a lengthy doc about Nilsson’s other film projects. 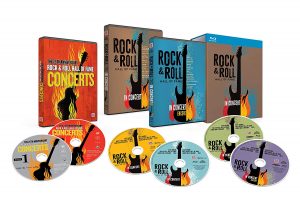 “Rock and Roll Hall of Fame: In Concert” (2018, Time Life) Six-disc Blu-ray set compiling inductions and performances from ceremonies held between 2010 and 2017, as well as the massive 25th anniversary concert. If you consider the HoF silly or self-congratulatory (my hand is raised), there’s plenty here to support that notion: Metallica pummeling Lou Reed and Ray Davies; Chris Rock’s ludicrous induction of the Red Hot Chili Peppers; and fast-forward-worthy appearances by Pat Monahan, Kid Rock and Rob Thomas. But there are also some impressive moments: Cat Stevens quieting the Barclays Center with “Father & Son”; the surviving members of Nirvana performing four songs with Joan Jett, Kim Gordon, and St. Vincent; Sir Paul inducting Sir Ringo (who leads Green Day on a ragged but right take on “Boys”); classy turns from Bill Withers, Leon Russell, Dr. John, Randy Newman and Tom Waits; and the Stooges (with Mike Watt) rattling the audience’s jewelry. If you’re die-hard about any of the performers/inductees, you’ll probably want the ceremonies and the anniversary concert, which is heavy with nostalgia and classic rock. 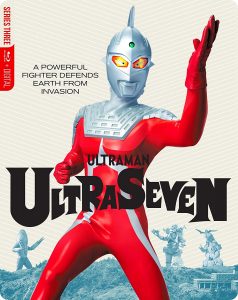 “Ultraseven: The Complete Series” (1967-1968, Mill Creek Entertainment) More kaiju mayhem from special effects legend Eiji Tsuburaya, who created the special effects for Toho’s Godzilla franchise. “Ultraseven” – the third series in the long-running Japanese science fiction TV franchise, which continues to this day – follows the basic formula of all “Ultra” programs, with a two-fisted extraterrestrial defending Japan from a horde of outrageous-looking giant monsters, robots and aliens laying siege to Japan. The twist here is that Ultraseven (Kohji Moritsugu) is an alien in the form of a human, and not renting the space (so to speak) like many of his Ultra brethren; he’s also equipped with his own set of monsters in capsule form, who grow to colossal heights and brawl when he’s indisposed. The show’s key appeal remains the non-stop creature hrowdowns , though there’s a note of moral complexity – Ultraseven doesn’t always agree with his human partners on the Terrestrial Defense Force, who favor an annihilate-first policy in regard to alien interlopers – that gives “Ultraseven” a slightly more mature tone that many other tokusatsu series. Mill Creek’s six-disc Blu-ray set offers all of the series’ available episodes – its 12th episode, “From Another Planet with Love,” remains out of circulation due to complaints over its alien, which was described as resembling survivors of the WWII atom bombing – in Japanese with English subtitles, and includes a glossy episode and creature guide.

I also want to put in a plug for OVID.tv, a streaming service devoted to international and independent features and documentaries. The SVOD (subscription video on demand) platform – a collaborative effort between six independent film distributors, including First Run Features, KimStim, Icarus Films and most recently, PRAGDA, which focuses on Latin American and Spanish features and docs – offers new and classic arthouse titles, many of which are unavailable from any other service. Their catalog includes titles by such major players on the arthouse scene as Claire Denis, Eric Rohmer, Michael Apted and Chantal Akerman, and they’ve just added films by Miranda July and Chilean director Patricio Guzman. OVID, which celebrates its 1st anniversary in March, is $6.99 a month and can be streamed through Apple TV, Roku and other devices.

Paul Gaita lives in Sherman Oaks, California with his lovely wife and daughter. He has written for The Los Angeles Times, LA Weekly, Variety and The Fix, among many other publications, and was a home video reviewer for Amazon.com from 1998 to 2014. He has interviewed countless entertainment figures from both the A and Z lists, but his favorites remain Elmore Leonard, Ray Bradbury and George Newall, who created both Schoolhouse Rock and the Hai Karate aftershave commercials. He once shared a Thanksgiving dinner with celebrity astrologer Joyce Jillson, and regrettably, still owes the late character actor Charles Napier a dollar.
View all posts by Paul Gaita →
This entry was posted in Movies, Music, Television and tagged CBS All Access, CBS DVD, Mill Creek Entertainment, MVD Rewind Collection, OVID.tv, Paramount Home Video, Time Life. Bookmark the permalink.