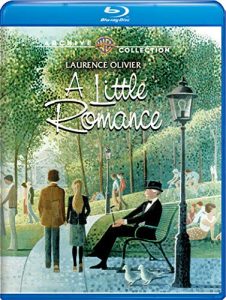 “A Little Romance” (1979, Warner Film Archives) Smart American pre-teen Diane Lane falls for savvy French street kid and movie buff Thelonious Bernard in Paris, and plan to enshrine their love with a kiss under the Bridge of Sighs in Venice (Italy) with the help of elderly pickpocket and hopeless romantic Laurence Olivier. George Roy Hill‘s comedy-drama walks a fine line between endearing and sticky-sweet, but largely succeeds on the strength of Lane’s poise, Olivier’s Continental charm and Georges Delerue‘s Oscar-winning score; there are also amusing turns by Sally Kellerman (as Lane’s self-absorbed actress mom) and Broderick Crawford (as himself) and the European locations are lovely; Warner’s Blu-ray includes only the theatrical trailer. 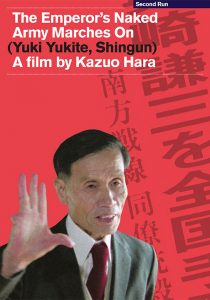 “The Emperor’s Naked Army Marches On” (1987, Second Run DVD) Horrific experiences in the Pacific Theater during World War II leave Japanese Army veteran Kenzo Okuzaki with a lifelong desire for revenge against Emperor Hirohito, which he carries out through increasingly strange ways. Raw-edged documentary by Kazuo Hara asks the viewer to consider if extreme measures are the right means to expose extreme ends – Okuzaki’s actions take some ugly turns, but what he discovers about the government’s treatment of soldiers as a result of his behavior is equally unpleasant – and whether impassive filming of such behavior represents complicity or documentary distance. Second Run’s all-region Blu-ray includes new interviews with Hara, who discusses his directorial choices, as well as liner notes by Tony Rayns, among others. 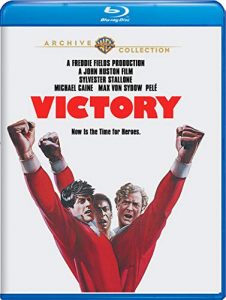 “Victory” (1981, Warner Film Archives) An exhibition soccer game between Allied POWs and their German captors provides both sides with unexpected opportunities: for the Nazis, it’s a chance to show their superiority, but for British soldier Michael Caine and American Sylvester Stallone (fighting for Canada), it may be a shot at escape. Suspenseful mix of war picture and sports drama from John Huston, based on a 1962 Hungarian film and an actual 1942 match between Germans and Ukrainians, enlisted a platoon of professional footballers, including Pele, Bobby Moore, and Osvaldo Ardiles, to fill out Caine and Stallone’s team; their presence, as well as Bill Conti‘s score (which draws on Shostakovich), adds legitimate excitement to the match. Warner Film Archives’ Blu-ray features a new HD scan and the theatrical trailer.

A big thank you to Warner Film Archives for providing free Blu-rays for review. 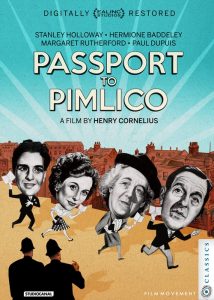 “Passport to Pimlico” (1949, Film Movement Classics) The discovery of documents that reveal the titular Central London neighborhood to be part of France prompts its residents to declare themselves independent and enact increasingly absurd requirements on their former neighbors. Recent events have added an ironic edge to this wry comedy from director Henry Cornelius and the much-loved Ealing Studios; T.E.B. Clarke’s script, which earned an Oscar nomination, is equal parts affectionate tribute to and gentle spoof of postwar British determination (and eccentricity), and handled with typically expert understatement by a sizable cast that includes such inveterate Britfilm scene-stealers as Stanley Holloway, Margaret Rutherford, Hermione Baddeley and Charles Hawtrey. Film Movement’s Blu-ray details the film’s restorations and offers a visit to the locations and detailed liner notes. 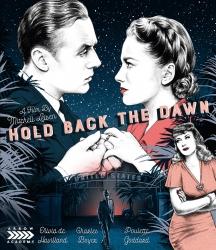 “Hold Back the Dawn” (Arrow Academy, 1941) Unable to make his way into the United States from Mexico due to his status as a Romanian immigrant, world-class cad Charles Boyer is persuaded by former dance partner Paulette Godard to marry naïve American tourist (from Azusa) Olivia de Havilland in order to obtain his green card; complications arise when the newlyweds actually fall in love and Goddard, who carries a torch for Boyer, catches wind of the situation. As with “Pimlico,” current events lend resonance to this prescient romance, directed by Mitchell Leisen; the romance between Boyer and de Havilland (who earned an Oscar nod for her performance, one of five netted by the film, including Best Picture and Best Writing)) is suitably swoony, but the script by Billy Wilder and Charles Brackett makes pointed (and poignant) statements about the immigrant experience, which was a thorny experience then as it is today. Arrow Academy’s Blu-ray includes commentary by historian Adrian Martin, a lengthy 1970 interview with de Havilland and a 1941 radio adaptation with Boyer and Goddard. 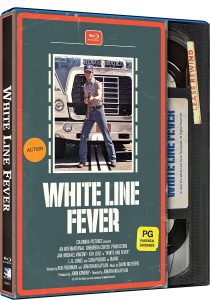 “White Line Fever” (1975, Mill Creek Entertainment) When his efforts to make an honest living as an independent trucker and marry sweetheart Kay Lenz are met with violent opposition by corrupt company man L.Q. Jones, Jan-Michael Vincent falls back on his training in Vietnam and offers a double-barred, gear-jamming response. Energetic actioner from Jonathan Kaplan (“Heart Like a Wheel”) works as both a prime example of ’70s-era trucksploitation, with an appreciable amount of mayhem and stunts (including a impressive 18-wheeler-vs.-giant glass sign setpiece) and as Fanfare for the Common Man drama thanks to Kaplan and Ken Friedman‘s script, which finds room for quieter moments and character development. Vincent and Lenz underplay nicely throughout, allowing the supporting cast – including Peckinpah vets Jones, Slim Pickens and R.G. Armstrong, as well as the great Dick Miller – to make off with the spotlight. No extras on Mill Creek’s Blu-ray, which is part of their fun Retro VHS collection.

Paul Gaita lives in Sherman Oaks, California with his lovely wife and daughter. He has written for The Los Angeles Times, LA Weekly, Variety and The Fix, among many other publications, and was a home video reviewer for Amazon.com from 1998 to 2014. He has interviewed countless entertainment figures from both the A and Z lists, but his favorites remain Elmore Leonard, Ray Bradbury and George Newall, who created both Schoolhouse Rock and the Hai Karate aftershave commercials. He once shared a Thanksgiving dinner with celebrity astrologer Joyce Jillson, and regrettably, still owes the late character actor Charles Napier a dollar.
View all posts by Paul Gaita →
This entry was posted in Movies and tagged Arrow Academy, Film Movement Classics, Second Run DVD, Warner Film Archives. Bookmark the permalink.