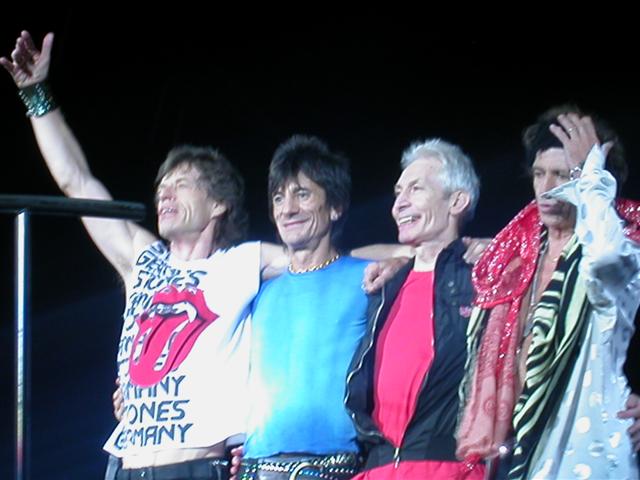 Photo of the Stones in Oberhausen 2003 by Indrarado courtesy of Flickr Creative Commons.

The Rolling Stones’ 50 And Counting tour is now officially underway, carrying with it a  lot of hype as you might expect from the standard bearers of Rock Stardom as we know it, along with a heavier than usual wave of resentment aimed at the band’s ticket prices. Post-Altamont, ever since they realized any attempt to do something nice for their fans will only get people killed, the Stones have always been the ones to push against the wall to find out what people would put up with. If other arena acts were getting $7.50 in 1978, the Stones would ask $12.50 and shock everyone by getting it. A few years later, when people had gotten used to a $12.50 ticket, the Stones would come around again and push it to $20.

This process has gone on for decades and prices have steadily gone up, but this year as the face price of a top ticket jumped from $500 to $2000, the price of a mediocre seat in the loge level soared from around $300 to over $600, and even nosebleeds would set you back $250, it looked just days ago as if the public was finally ready to give the Stones a wide berth. As comedian Bob Lefsetz noted in his Lefsetz Letter, large blocks of seats for opening night in LA remained unsold just two days before the show. He wasn’t wrong about this, I observed it myself on the AXS ticketing website. If it was any other band, I might be worried the gig would get called off for poor advance sales.

But the Stones aren’t any other band. Having anchored their starting price in the sky, they then offered an unspecified number of $85 mystery seats, buyers of which would not know their seat location until arriving at the box office. Suddenly, spending almost $100 for what might be a crappy 300-level seat felt like an incredible bargain. Between Thursday and Friday, more $85 tickets were released by the handful, and those lucky and persistent enough to get them made up what must be the longest will-call line I’ve ever seen as the doors prepared to open at 7pm.

By 9pm, it was evident that Lefsetz’s prediction of a half-empty house had failed to materialize. It was filled to overflowing.

Lesson: never underestimate the Rolling Stones. They are very good at what they do. I can’t believe they got me to spend money on them this year. But while $85 is still a lot, it’s doable for a special event, and what they managed to do was convince me that this could indeed be a special event. Last week’s $20 ticket sale for the Echoplex show tantalized me, as I’m sure it did a lot of people that didn’t even find out about it till the next day. And with the lottery system, I could get FRONT ROW SEATS for all I knew. It changed my emotions about the Stones show from being something I couldn’t possibly afford, to something I would like to do if I could pull it off. They got me thinking about it. That’s good marketing strategy for you.

As it worked out, the $85 line was well organized and moved along quickly. Despite assurances that seat assignments were pre-determined “at the time you purchased the ticket” and a place in line made no difference to seat selection, when we got to the window, the employee had a stack of envelopes piled up and just gave me the one off the top after verifying my ID. My friend and I were in section 331, top level next to the stage, about as high up and far to the side as it’s possible to get. Most of the people in line next to us ended up in the Staples’ upper level, although one was heard to holler “that’s a $600 ticket!” as he ran away from the window happily.

The people sitting next to that guy might grumble about the fact that they had to mortgage their house to get the same seats. But once the music started, regardless of what anyone had invested in the moment, it would be hard to believe they didn’t get the payoff they were looking for.

As the now requisite pre-concert video with endorsements from various talking heads (Pete Townshend: “Keith Richards once threatened to stab me…”)  faded out, the UCLA Bruin Marching Band paraded through the aisles blaring a sharp rendition of “Satisfaction” before Charlie Watts cut them off with the unmistakable opening beat of “Get Off My Cloud.” The masses sprang to their feet, where they remained for most of the remaining two and a half hours.

Two more early singles followed in quick succession, a hard-charging “The Last Time” and a spectral, haunting “Paint It Black”, interrupted by another jukebox gem circa 1975, “It’s Only Rock And Roll”. While it took a few numbers to get the sound balance right for those of us on the far side, by the time Keith Richards and Ron Wood hit the opening notes of “Gimme Shelter”, things were crisp and well defined, if a tad bottom-heavy.

From the outset, they were obviously playing well. That loose-but-tight thing they have cultivated since the sixties is still there, and still runs the risk of going too far in either direction. Too loose and they can sound sloppy and shoddy, an insult to their top-dollar-paying customers. Too tight and it feels like we’re at a Vegas revue, while they plow through the hits with no commitment. Tonight, they’re dancing on the line, right where we want them.

Charlie’s good tonight, isn’t he? They’re all good tonight in fact. Mick, from a distance, looks like his Ya-Yas era self as he reveals a series of tight black and white tops, donning a hilarious feathery cape for “Sympathy For The Devil” that would be shed in a striptease. Keith’s not as physically animated as he used to be but that peculiar push-pull timing and the sense of wide-open space in his playing, even at its most aggressive, is still tremendously exciting. Wood, cleaned up and re-energized, looks and sounds better than he has in decades. The support players are hot too.

To the delight of probably every single person there, the set completely overlooked their post-Tattoo You career with the exception of  “Doom And Gloom” and “One More Shot”, the two new songs found on their latest hits collection, Grrrrrr. To mix up the set list, they instead reached further back. The Beggars Banquet standout “Factory Girl” was brought back to the stage for the first time since a brief reintroduction in the nineties, a gorgeous version with acoustic interplay between Jagger, Wood and Richards. “Emotional Rescue” was played for the first time ever, and was the set piece for a bass solo from Darryl Jones that had Wood and Richards standing slack jawed in amazement. Both were very effective mid-set breaks for air in an otherwise high-energy set.

Special guests are now common at Stones gigs, and tonight we got to see Gwen Stefani take a verse of  “Wild Horses” (and botch the lyrics), and the skinny long-haired bearded guy headbanging his way through “Respectable” turned out not to be Dave Grohl as I originally guessed, nor Johnny Depp as my friend feared, but Keith Urban! (I realized the figure on stage wasn’t Grohl when I decided he wasn’t Muppet-like enough.) The CSU Long Beach choir was brought onstage for the intro and outro of “You Can’t Always Get You Want”, a nice touch. None of these exactly took the show to another level, but none got too much in the way of a good performance either.

The only guest that really mattered, mattered a whole lot: Mick Taylor, brought up for a scorching, highly improvisational take on “Midnight Rambler” near the end of the night that had no problem recalling the band’s most glorious heights from the end of the 1960s. His presence means a lot to the fans, who haven’t seen him onstage with the band since 1974, and his performance more than justifies the excitement surrounding his return.

After Taylor exits the stage, it’s a cavalcade of pretty much all the songs that they HAVE to play, but haven’t played yet. “Miss You”, “Tumbling Dice”, “Start Me Up”, “Brown Sugar”, “Sympathy” then an encore of “Can’t Always Get…”, “Jumpin’ Jack Flash” and “Satisfaction.” I MEAN! Stones enthusiasts might complain this is the boring part of the show, all the ones they’ve done a million times, but I don’t care, I don’t go see the Stones very often and those are some GREAT SONGS. Mick is out there on the tongue-shaped catwalk shimmying inhumanly and sounding like a great rock and roll singer, Keith is peeling off riffs like only he can, Charlie is swinging the whole enterprise with a funky kick-hat-snare thing, and then seven more amazing songs in a row done equally well, yeah, forgive me for not being bored with that. That was one of the most effective buildups to the finale of a concert I’ve ever witnessed.

Surely, if the Stones are going to cash the checks from this tour, they’ll have to accept the blowback over their own pricing scheme. It’s certainly a fair target for their critics, and I expect to see a lot of reviews from this tour bringing it up. I’m not sure HOW good they could possibly be to justify someone like me paying $600 to see them. But at the same time, I’d encourage anyone to keep an eye out for the $85 option when they return to Staples and the Honda Center later this month, because this really is a show worth seeing, if you can pull it off.