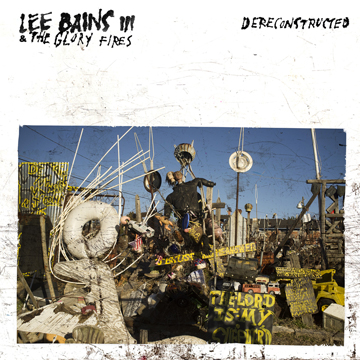 Dereconstructed is the new album by the fabulously-named Lee Bains III & The Glory Fires (get it? glorifiers? because I was on late on that). The album, from start to finish, is one awesome blast of blisterin’ southern rock with clever, mostly political lyrics.

I discovered the band through The Bitter Southerner, which is a fascinating site for southern transplants like myself. Their piece on Dereconstructed, which is the band’s second album and their Sub Pop debut, started off by calling it “the most important rock record about the south ever”, so I certainly had to listen to it after that!

The group was founded in Birmingham, AL by singer/guitarist Lee Bains, formerly of the Dexateens, whose energy and optimism beams from the huge grin under the baseball cap he sports in many pictures. On Dereconstructed, the guitars are turned up loud and raw in the forefront which is appropriate and thrilling, but Bains’s voice has such a soulful yet light grittiness, that it’d be nice to hear it a bit better. He drops in “y’all” and “ain’t it, baby” and “shoot” (I think) throughout the songs, and it somehow sounds totally natural and unaffected. Most of the album has an updated classic rock feel, revved up with a punk rock edge.

The opening song “The Company Man” sets the tone for the album, launching into ominous, grinding chords and Bain calling out “Tell me why” a few times before letting loose a scream. The song has an epic and ever-relevant chorus lyric, “Don’t ever trust the company man” (which weirdly makes me think of Paul Reiser in Aliens). But it starts off referencing Bull Connor, the man who set fire hoses and dogs on civil rights marchers in 1963. Bains sings that his grandma remembers seeing Connor in church, looking “Mean and proud even praying in the pew”.

“We Dare Defend Our Rights” kicks off with scathing lyrics that make it even clearer that these guys aren’t Good Ole Boys: “‘Blessed are the meek’ / Unless it’s four little girls in Sunday school / Learning how to turn the other cheek / Or the younguns lashed with brimstone tongues / (‘Boys like girls, and girls like boys.’) / Or the hijos watching Papa patted down / In the blue lights and siren’s noise.”

One of my favorite tracks, “Burnpiles, Swimming Holes”, has an urgent, chugging riff in the verses and a yell-along chorus that’ll pump you up if you’re down. “The Kudzu and the Concrete”, which references an invasive climbing vine that covers much of the southeast, is decidedly catchy, and “The Weeds Downtown” is another standout, taking a break from the manic energy for slower verses and an uplifting chorus. The lyrics on the latter are stubbornly optimistic about Bains’s hometown: “Paris and New York don’t have honeysuckle vines like the ones on 32nd Street / I know that Birmingham gets you down, but look what it raised you up to be.”

“Mississippi Bottomland” is another track that slows things down a bit, with a bluesier feel, while “Flags” is basically punk rock with its shouted, one-word chorus. Like every single song on the record, it is probably amazing live, so it’s a shame that I already missed the L.A. stop on their tour. They played the Bootleg Theater on June 21, but hopefully they’ll be back again soon!

Simone Snaith writes young adult and fantasy novels, and sings in the band Turning Violet. A fan of scifi, fantasy, the supernatural and most things from the '80s, she enjoys reviewing music, books and movies. You can read about her own books at simonesnaith.com.
View all posts by Simone Snaith →
This entry was posted in Miscellanious, Music and tagged bitter southerner, civil rights, indie rock, lee bains, punk, racism, southern rock, the glory fires, the south. Bookmark the permalink.