An Early Peek at Redline Restaurant and Video Bar 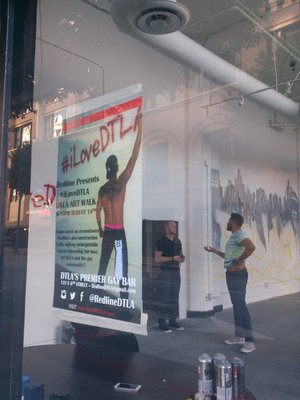 A peek inside The Redline (Gary Idama)

Thursday, August 14th, was the soft opening of Redline, the second Gay bar in DTLA. Actually it was more of an art “happening” by Graffitti artist, Aloy, who was spray painting a huge wall space to be the future bar area. The theme is an homage to Downtown Los Angeles and the Gay Community. Many throughout the Gay community have trekked here to support a new renaissance, back to a place that was our hunting ground before the 1970’s.

Downtown used to have many Gay bars in the 1960’s and back, as witnessed in John Rechy’s “City of Night” and “Numbers” as well as Gore Vidal’s “Salt and the Pillar,” but with LAPD harrassment and the rise of West Hollywood Gay establishments that were under the less stringent administration by the LA County Sherrifs, the DTLA Gay bars slowly disappeared.

The last two Gay bars in DTLA that I remember were the Waldorf, with tough, street smart drag queens and Harold’s, which some say harbored “rough trade” who hung around the bar to get money from Johns who tried to curry special favors from the street smart boys. By the mid 1980’s both Harold’s and Waldorf, which were on 527 and 555 South Main Street, were considered by the city officials to be the center of vice and were condemned, with parking structures taking their place. Other bulidings along that stretch of Main Steet were also condemned since they harbored the homeless.

Sometime around the 1990’s, a Gay bar called Score was located at 107 West 4th Street, catering somewhat to businessmen in DTLA as well as the local Latino population living nearby. More recently, there is a bar mostly patronized by a Latino crowd called Jalisco Bar on 245 South Main Street close to the old LA Times Mirror Building.

With the new influx of Gays living in DTLA, two new places will be open in Fall: The Precinct in the New Ace Hotel and Redline Restaurant & Video Bar at the corner of 6th & Los Angeles Streets. Hopefully, they will show snippets of Vita-Meat-a-Vega-Min and other classic TV in between music videos.

I talked to one of the employees of Redline, and he mentioned that the scheduled opening is for sometime in November, since at this present time, the space needs to be totally renovated and equipped with bar and restaurant furniture and kitchen facilities. Good luck and good fortune for this new and ambitious enterprise

A gourmet since the mid 1970s, Gary Idama has an extensive knowledge of a variety of cuisines, but is partial to Japanese food. When Gary reviews restaurants, he looks for good food and drink, good bang for the bucks, a clean eatery and kitchen, plus knowledgeable and enthusiastic service. He is a member of Yelp's Elite and spends his time at restaurant and cultural events, hanging out with friends, and attending Sake/Wine tastings. His last meal on earth would be Omakase with premium Sake at Mako Sushi in Little Tokyo and maybe a little salted, preserved Fugu ovary with a Napa Pinot Noir.
View all posts by Gary Idama →
This entry was posted in Art, Cocktails, Beer, Wine & Weed, Events and tagged DTLA Art Walk, gay bars, gay bars in LA, graffiti art, new bars in DTLA, Redline, Redline bar, Redline restaurant and video bar. Bookmark the permalink.