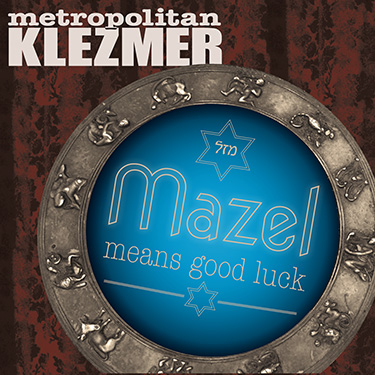 There is something uniquely invigorating about a klezmer band in full flight. And quite possibly nothing more pathetic (in the original, true, sense of the word) than a klezmer band in mournful, melancholy mood.

If proof is required, Metropolitan Klezmer provide it on their new CD Mazel Means Good Luck, recorded live at The Emelin Theater in New York. The CD, Their fifth, marks the twentieth anniversary of the celebrated eight-piece band.

Mazel Means Good Luck begins with an enchanting medley of Nokh a Gleyzl Vayn (Another Glass of Wine) segueing into the raucous C Minor Bulgar and Ken O’Hara Freylekhs. The opening processional music is followed by a lively piece heard in repertoire of Klezmer icons Dave Tarras and the Epstein Brothers, which the group learned from their first reed player, Howie Leess (1920-2003). The second track blends Bonia’s Nigun – a traditional Hasidic chant melody adapted from a classic arrangement by Bonia Shur – and Cartagena Chosidl, an original klezmer/cumbia tune by composer Rick Faulkner. His mélange of Latin and Hasidic musical influences fuses Colombian rhythm and Eastern European scale and harmony.

The swinging title track, a pop standard by Artie Lane, Jack Beekman and Leo Fuld, was first introduced in 1947 by its co-writer Artie Lane. It was recorded that year by Louis Prima, Benny Goodman, and even doo wop group The Ravens. It gained full Yiddish verse and chorus when sung in 1954 by multi-lingual star Fuld. In 2006, Robert Smigel of “Saturday Night Live” fame created his own wild takeoff. This Metropolitan Klezmer version features horn section shout chorus by Debra Kreisberg and powerful vocal performance by Melissa Fogarty.

The sweeping and melodic arrangement of Yankele is adapted from the version by Soviet Yiddish singer and theater star Anna Guzik (who recorded it as Kolybelnaia during Khrushchev’s cultural thaw), based in turn on the original by Mordechai Gebirtig, the Polish Yiddish carpenter and master songsmith. The lullaby, the story of a mother dreaming of her little boy growing into adulthood, has a particular poignancy given that Gebirtig was killed in his native Krakow during the Holocaust. The track is given an added resonance considering this live recording came two days after the massacre at Sandy Hook Elementary School.

Baltic Blue – a jazz-inflected original by the group’s reed player Debra Kreisberg – is accentuated by majestically-ornamented modal accordion and an arresting brass arrangement. The song was written as a musical meditation to her native borough of Brooklyn. A special highlight features Di Fire Korbunes (The Fire’s Sacrifices), the heart-wrenching 1911 Yiddish ballad chronicling the Triangle Shirtwaist Factory Fire. The piece, written immediately after the disaster, was nearly lost to performance history until it was brought to Metropolitan Klezmer by a researcher from Remember the Triangle Coalition who located the sheet music in the Library of Congress. This new arrangement was performed on March 24, 2011 at the centenary commemoration concert in the Great Hall at Cooper Union, NYC. This audio is now also in the permanent collection in the “Activist New York” exhibition at The Museum of the City of New York.

The lilting Cheburashka Wistful Waltz by film composer Mikhail Ziv is from the 1969 animated short Krokodil Gena, which introduced the beloved Soviet TV cartoon character Cheburashka. Ziv is perhaps most famous for his work on the epic war picture Ballad of a Soldier (Ballada o Soldate) a decade earlier. The playful Guys & Dolls & Bagels is adapted from Adelaide’s Lament and Luck Be a Lady Tonight from Frank Loesser’s iconic Broadway musical, with the happy addition of the traditional melody Bublichki, Beygelekh. This is followed by Mainly Rumanian Interludes which features the distinctive work of Ismail Butera, the virtuoso accordionist who co-founded the group with drummer and bandleader Eve Sicular. The album closes with the track When Israel Met Jenny from Sicular’s musical documentary theater piece, J. Edgar Klezmer.

The album cover’s zodiac wheel represents layers of meaning for “mazel”: Luck (in a word shared from Hebrew to Yiddish) reflects underlying definitions: planet, star, constellation. Mazel tov is a wish for both a lucky star and lucky fate. The band hopes this comes at an auspicious moment, celebrating two decades of making music together.