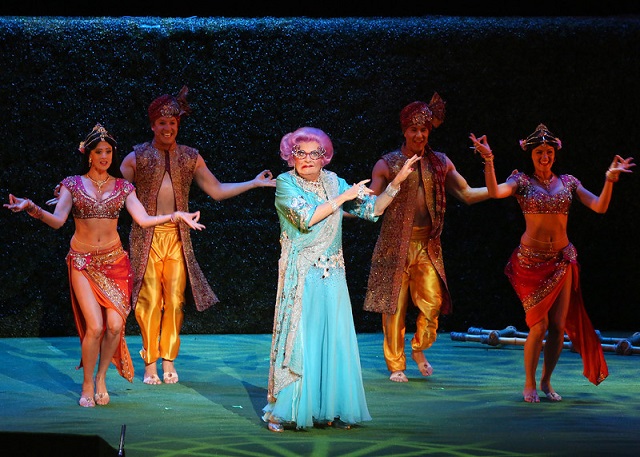 Dame Edna Everage says what everyone is thinking (sometimes even before we know we are thinking it!). Part adult, matriarchal Mary Poppins, part riotously reproachful Royalty, she will tickle our adult and childlike funny bones in kind as she prompts mature behavior out of everyone in the most enchanted, reproving, and best-babysitterish of fashions.  It also doesn’t hurt that her voice sounds just a trifle bit like that of a euphoniously, lilting Miss Piggy which only adds to the consistent giddiness provoked by her performance.

It is a warm and vibrant evening on the patio to the fore of the Ahmanson Theatre in downtown Los Angeles. One can near-palpably feel Dame Edna’s proximity as everyone and her sister–who’s anybody in the media–parades away from the press table sporting the most stunning Corinthian-rimmed, bejeweled sunglasses.  Big, burly, hulking men loiter Paparazzi-side bearing the most bombastic of feather boas the color of Day-Glo Play Dough and you just know you’re in the right place! 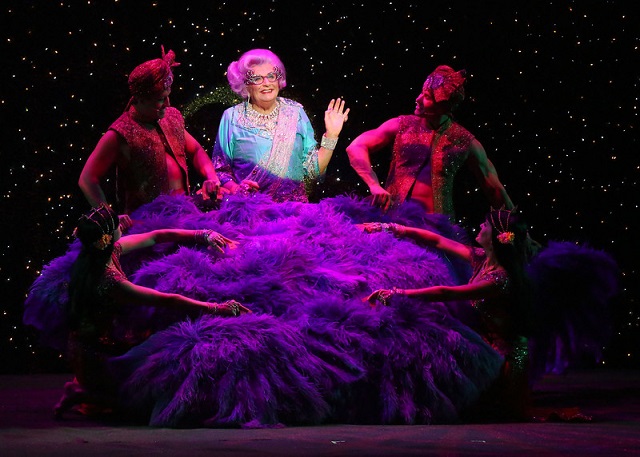 One by one, celebrities begin to arrive on the proverbial red carpet that doubles as grey concrete; Barry Bostwick in all his silver-foxed glory, Anjelica Houston in all her Morticia Addamsish aplomb, and last but not least, Pierce Brosnan himself!  One can almost hear our imminent hostess in question gently chiding the chivalrous leading man for cutting it so close to curtain!  “Pierce Possum? Her Royal Majesty’s Secret Helicopter on the fritz tonight?  Tsk, tsk, tsk.  You should know better my love.  Think back. Think back to all your erstwhile Angeleno freeway experiences.  On second thought, don’t.  It’s really much too vexing and you look so much less attractive when you frown…”

Equally admonishing are the audience instructions once inside the auditorium. Blinded by the dimmed lights in preparation for the night’s festivities, a warm, yet dry-witted male voice instructs us to enjoy watching the performance and that to do so, “It is best to position yourself so you are facing the stage:  The raised area concealed by a curtain.” We will be reminded that “Dame Edna is turning off her cell phone,” prompting us to do the same and that we should all “seek medical help if you’re still laughing four hours after the performance.”

And laugh we will, as she enters with one of her first um…wise-ass-isms: “Let me look at you. You’ve aged. You’ve aged tragically.  But I’ve stayed the same. It’s not fair Possums!!!” 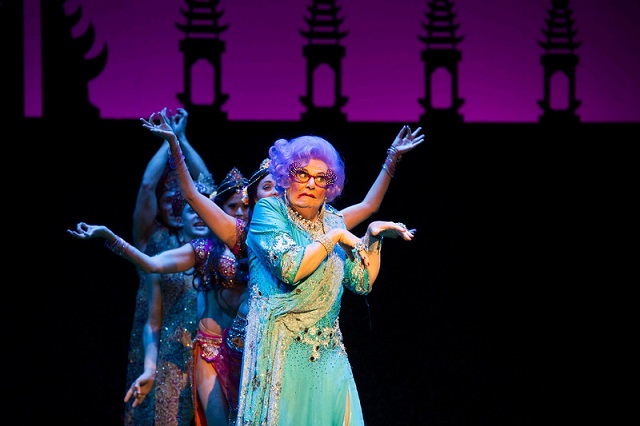 The entire tenor of the performance smacks of a live (as opposed to canned—or god forbid dead) variety show, somewhat reminiscent of The Carol Burnett Show on Australian Acid (yet decidedly lacking in Tim Conway or anything the least bit Tim Conwayesque, which is perfectly okay really—considering the nature of the piece). Dame Edna will sing us a few comedic and original songs two of which are written by the vastly and comedically talented Wayne Barker. During the musical portion of her performance she will be consistently flanked by a quartet of singer/dancers; two male, two female in the form of the immensely coordinated and gifted Ralph Coppola, Brooke Pascoe, Eve Prideaux, and Armando Yearwood Jr. (whom I will refer to as ‘The Manhattan Transfer’ because their gender configuration and level of brilliance is just that comparable). Included in the mix and certainly not last or least is her musical director and onstage accompanist; the ever-capable Jonathan Tessero.

During the course of the two hour extravaganza, she will regale us with tales of her children; 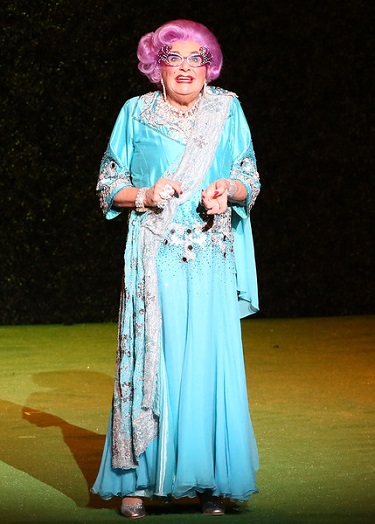 ”Lois—Lois was stolen in the night by a feral Koala Bear. My fantasy is that she’s being looked after by a caring Koala Family.  Every time I pass a Eucalyptus tree, I look up!… Brucie—Brucie owns a chain of Ugandan restaurants… [Seriously]  How many of you will come out of the theatre and say, ‘I’m in the mood for Ugandan’…?  Kenny is a choreographer…a flower arranger…and religious.  He goes to the Abbey every Sunday (this statement—met with howls of laughter as The Abbey is a noted gay bar/restaurant in the heart of West Hollywood)… He is also a curator of 18th century snuff boxes. It’s not difficult.  There’s only 3 [of them in the world].”

–Inspire us with stories of her marriage,

“I was married thirty seven years. It was a fairytale, a Grimm Fairytale…”

–She will talk about herself…

“I have Aspergers, am Bi-polar, Gluten intolerant…I’m also a functioning Ebola sufferer.”

“I’m no spring chicken. I’m approaching sixty—from the wrong direction but I am!”

–and her latest spiritual epiphany at a recently visited Ashram, and fittingly enough as the tour’s subtitle is “Eat, Pray, Laugh”.

“I think I look radiant now. I went to an Ashram.  It’s like a trailer park for the soul… [You] fly east as fast as possible, and about four Adam Sandler movies later, you’re in India!”

She may even give some of her jewelry away towards the end, pertaining to her enlightenment, as she will melodiously intone, “This is my moment, my epiphany. I’m giving away my jewelry, my Cartier and Tiffany,” but may just think better of it out loud after long and storied deliberation and snatch it back from an unwitting–but possibly emergingly witting–audience member. 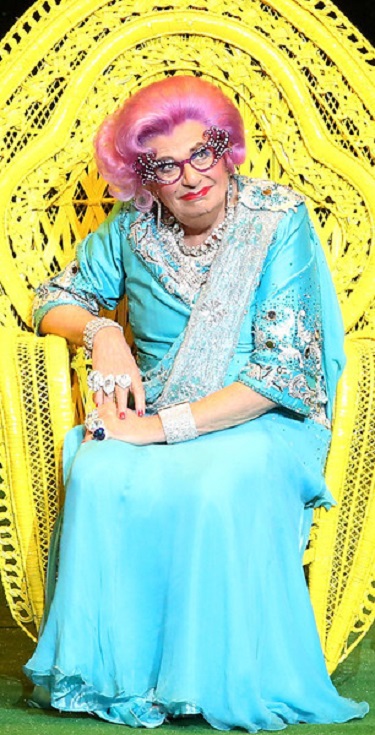 My favorite part of the performance is our Grand Dame’s liltingly pleasant chiding of Audience members down in the front rows and her equally sardonic pity of the Balcony squatters to the rear, or “Les Miserable” as she will dub them. “Listen to their wistful cries.  It’s steep up there isn’t it possums?…  I will look up there in proportion to the amount you paid,” at which point she will harass the victims…er…I mean subscribers down front for the balance of the evening.

“Oh look at you…faces like flowers…and the occasional cactus…”

“Ah you’re dressed for a special occasion; not this occasion but a special one like cleaning the car or helping a cat give birth!”

And to the woman she will catch reading in the third row, “What is your name my little bookworm?… What did you say to yourself this morning? ‘I feel like a good read.  I know.  I’ll go to the theatre tonight and sit in the third row!’…  At what point did you tune out?”

To the couple wherein the man interrupts the woman just a little too much for our fair Dame’s fair taste, “She can speak for herself! What is he a ventriloquist or something?—hand up her frock!!!”

All in all, a laugh fest to be reckoned with most assuredly!!! The only minor criticism I would have for the overall structure of the spectacle is that there could have been one extra song in the middle of the first act to give it a little more texture and afford the program more levels. The piano player was idle for far too long.  While we are on the subject of length, the second act could have been just a little bit shorter as some of the bits got a little exhaustive and repetitive for my taste, particularly the last bit of onstage audience participation, and the full segment of audience participation after that to my own inner monologue of “Okay…I get it…I GET it!  Let’s move it along now…”  Lastly, I had a bit of trouble hearing our fair Dame at certain points and could not always discern if this was due to the mic and the sound system or the fact that there was copious amounts of laughter, the latter of which I most assuredly forgive!

There are two or three surprises at the end Possums, but I’ll divulge them not. However, let’s just say that—concerning the second or third, once Dame Edna leaves the stage, don’t even think of leaving to escape in order to make a mad exodus from the parking garage early.  I know your expeditious ways but they won’t server you this time!!! 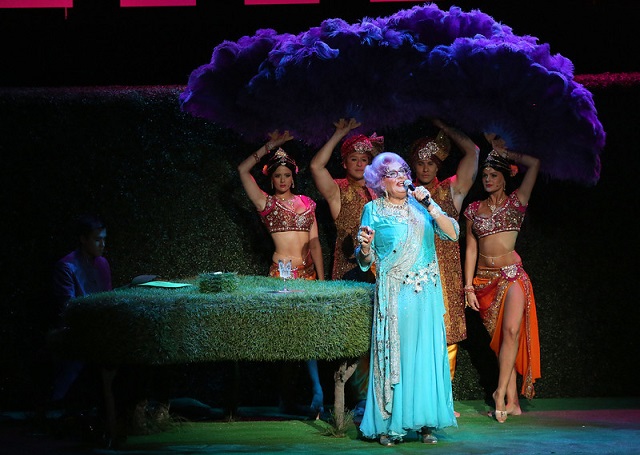 The large and sparkly glasses framed set by Brian Thomson is simply enchanting, direction by Simon Phillips sound and steady and U.K. Costume design by Stephen Adnitt is positively magical.  From Dame Edna’s bejeweled, hot pink dress in the first act, to her Indian Sari themed blue dress in the second, there’s something for everyone, even the menfolk—whether or not they are so inclined of course…

Lastly but certainly not leastly, Barry Humphries does a bang up job at the character he has only been honing and embodying since the mid-nineteen fifties and it almost seems redundant to even point out that he does an amazing job at playing someone who is essentially his alter ego and a deeply ingrained part of his inner outer and cimcumferential fabric.—But he does! He might even be on to something in terms of the longevity of his continually cultivated character as she truly does not age—and we, as she puts it, all seem to age most tragically!  Then again, there’s something to be said for the immortality of any beloved character even literally.  If so, it is certainly a monopoly retained by the Everage/Humphries duo! (Oooh Everage—Ever age!—Get it?  Get it?  Oh the irony!!!)

Jennifer K. Hugus was born at a very young age. At an even earlier age, she just knew she would one day write for the LA Beat! Having grown up in Massachusetts, France, and Denmark, she is a noted fan of Asian Cuisine. She studied ballet at the Royal Danish Ballet Theatre and acting at U.S.C. in their prestigious BFA drama program. She also makes her own jewelry out of paints and canvas when she isn’t working on writing absurdist plays and comparatively mainstream screenplays. Jennifer would like to be a KID when she grows up!
View all posts by Jennifer K. Hugus →
This entry was posted in Miscellanious, Theater and tagged Ahmanson Theatre, Barry Humphries, Dame Edna, Dame Edna's Goodbye: The Farewell Tour, eat, Laugh, Pray. Bookmark the permalink.