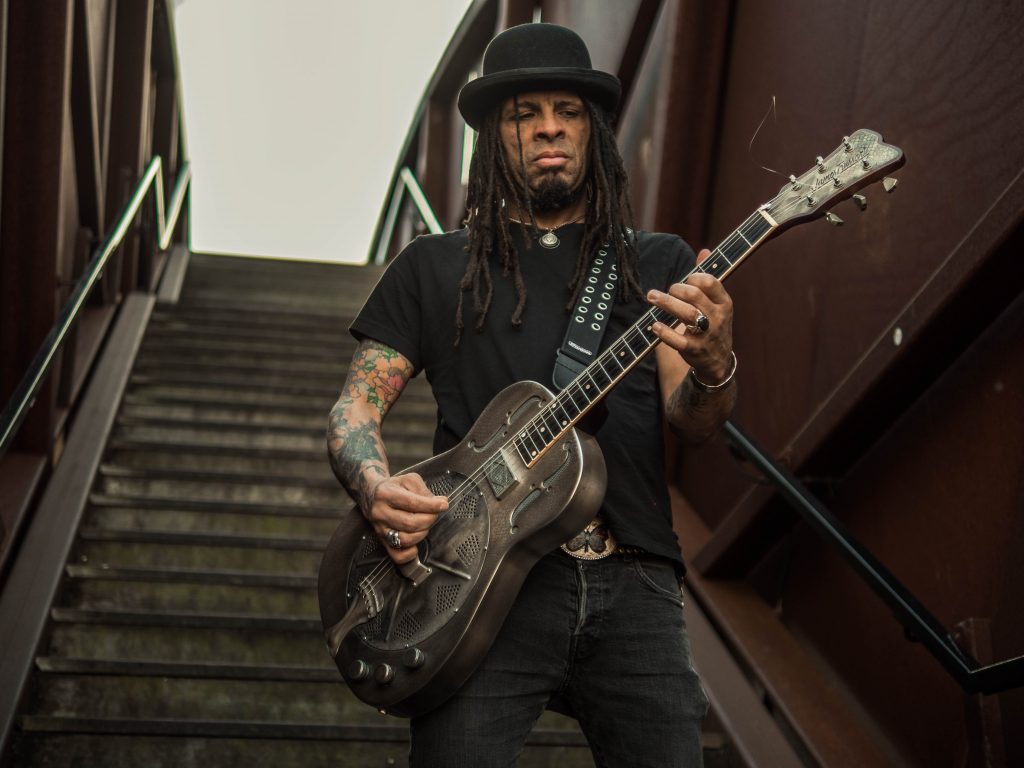 Eric McFadden has gone his own way with his music for over three decades now, both as a solo performer and recording with and backing an amazing list of artists such as Keb Mo’, Joe Strummer (The Clash), Bill Kreutzmann (Grateful Dead), Bo Diddley, Pink, the LA Beat’s own Mike Watt (Minutemen), Fishbone, Jack Johnson, George Clinton (Parliament-Funkadelic), Ronnie Wood (Rolling Stones, Rod Stewart) Joe Santiago and Dave Lovering (The Pixies) and many more.

McFadden brings his guitar and voice to an intimate show at Genghis Cohen in Los Angeles on Saturday, November 24, 2018. McFadden has created his own style of music, a no-holds-barred, gut-wrenching style which he calls the “dirty blues.”

The show at Genghis Cohen will feature many numbers from his recently released CD Pain by Numbers on Whiskey Bayou Records. Pain by Numbers brings out McFadden’s passionate visions, with backing from Doug Wimbish (Living Color) on bass and Terrence Higgins (Warren Haynes, Ani DiFranco) on drums. The album also features Tab Benoit on keyboards. The legendary blues musician not only performs on Pain by Numbers but also has produced this fine album.

The tunes on Pain by Numbers incorporate many musical emotions, from dark gospel and dirty blues to flamenco and funk. “Cactus Juice” can set a relaxing mood with its flamenco and finger-picking acoustic stylings, while “Love Come Rescue Me” showcases a bluesy,gospel-tinged feeling with Mc Fadden’s expressive voice. Other songs like “Don’t You Want to Live,” with its blistering lead guitar shows that he can rock with the best of them.

McFadden recently told the Los Angeles Beat about creating Pain by Numbers, his background and the upcoming Genghis Cohen show.

Q: Pain by Numbers, your latest album, was produced by extraordinary blues guitarist Tab Benoit. How did he help shape the album?

A: Tab assumed the role of trying to pull out the most genuine performance possible out of the players. He wanted to get some raw passion on tape. He dialed in some great sounds, and had a few good arrangement ideas as well. He made for a very painless and productive session. He plays organ on the record, as well as drums and guitar on a track. Also, it’s hard to go wrong with Doug Wimbish and Terence Higgins as your rhythm section. 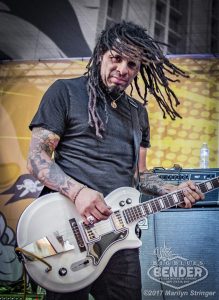 Q: Eric, you seem to have been influenced by everyone from Buddy Guy to The Beatles, The Clash and The Ramones. Who would you call your main influences? Was there an artist you backed who really had a profound influence on you?

A: I’ve enjoyed venturing into many musical realms. It would be difficult to name one main influence, but the Beatles and Stones are high on the list. Also, Jeff Beck, Muddy Waters, Django Reinhardt, Zeppelin, Sabbath, Queen, Paco DeLucia, Bowie, Funkadelic, Carla Bozulich, Pj Harvey, Bad Brains, Hendrix, Hank Williams, Nels Cline, Marc Ribot, The Clash, Tom Waits, Sly Stone, Dylan, John Lee Hooker, the list goes on. As far as artists I’ve backed that have influenced me, George Clinton first comes to mind. Touring with P-Funk was quite the experience, and impacted me very profoundly. That’s one hell of a circus.

Q: You can go from playing (semi) acoustic songs such as your backing Eric Burdon on Bob Dylan’s Gotta Serve Somebody and create an acoustic masterpiece, to turning up the distortion and shredding it on Jimi Hendrix’ Manic Depression. How did you wind up with such a broad palette of sound to work with?

A: I’ve always been into a wide range of music. Classical, punk rock, blues, flamenco, funk or what have you. I started on my Dad’s Ovation 12-string, then got a nylon string when I was 11. I’ve always had a great affinity for the nylon string guitar. I’ve spent my whole musical life jumping back and forth between acoustic nylon and electric, and almost always have both at my gigs. With my old band, Faraway Brothers, I started running my nylon string through an overdrive or fuzz, so I’d sometimes play Hendrix on the acoustic, nylon string, for example. I still do that on occasion. I love that tone and texture.

Q: Your original songs cover a wide variety of topics. Is there a general theme to your writing or is every one a unique vision?

A: The only consistent theme in my writing would be that I write from my experience and my imagination, so anything goes. Love, pain, joy, addiction, politics, religion, death, sex, ice cream etc. There’s a lot to process these days, given the climate of this traumatized world we currently live in. A lot of song fodder.

Q: You’ve got an upcoming show at Genghis Cohen, an intimate venue in Los Angles. Any special plans for a room where it’s really easy to connect with the audience?

A: The general idea is to play the best possible show we can, and try to create a memorable experience, at the very least. Seeing as the room has such a cool, intimate vibe, it’ll be pretty stripped down and largely acoustic stuff. I’ll have Seth Ford-Young (Tom Waits, Edward Sharpe) on upright bass, and some other guests, including Greer Sinclair.

Q: You’ve been on the road for over 20 years. Do you have a great story from the road?

A: All I can say, in brief, is that I’ve seen and done more than I could have ever have hoped to in my many years doing this, and I’ve only just begun.

Q: Thanks Eric, sounds like it will be a great show at Genghis Cohen!

Eric McFadden has proved over 30 years of playing and recording that he can go from dirty blues to beautiful fingerpicking and not even miss a beat. The Genghis Cohen show will be wonderful to see for anyone who wants to see a musician not afraid to stress the boundries of his craft in an intimate venue, rather than the typical concert hall. This should be a rare evening to enjoy a true talent.

Ed is a native of Los Angeles who loves food and food cultures. Whether he's looking for the best ceviche in Colombia, the best poke in Hawaii, the best tequila in Jalisco or the best Taiwanese Beef Roll in Los Angeles, it's all good food! He also loves a good drink. He's had Mai Tais in Hawaii, Bourbon in Kentucky, Tequila in Mexico and Rum in Jamaica. His wine escapades have taken him to Napa, Sonoma, the Willamette Valley and the Santa Ynez Valley. And he's had beer all over the world! Music is another of Ed's passion, writing and interviewing many classic rock, rock and blues musicians. Getting the great stories of road experiences from them is a particular delight. Traveling also fits in with Ed's writing, exploring all over to find the most interesting places to visit, even in out of the way areas.
View all posts by Ed Simon →
This entry was posted in Miscellanious, Music, Upcoming Events and tagged Blues, dirty blues, Doug Wimbish, Eric McFadden, Faraway Brothers, Genghis Cohen, Guitar, Los Angeles, Pain by Numbers, Tab Benoit, Terrence Higgins, Whiskey Bayou Records. Bookmark the permalink.