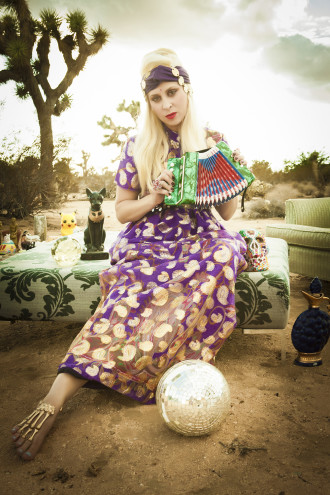 It’s Jesika’s hejira and her trip’s foundation are strong sexual themes, and if her position is not one of a feminist, then she’s coming from a position of strength, where she’s dominant and in control. Metanoia, the intro to “Journey Mitchell” starts the trip that loads heavily into the throbbing and pulsive dance beats of the second song, Glamorous Misery. Then the weirdness kicks in with Psychic Spice “Journey Mitchell’s” first single. It’s a fast paced tripped out EDM beat and diatribe styled lyrics with SiFi vocals that tunes in on anyone’s inner freak. Put Your Weight on Me is heavier and has a Dubstep vibe. Looking for a Weirdo is easily the most accessible and radio friendly song on the album with a delicious sing-a-long quality about it. Jesika closes out the album with a cover of Cyndi Lauper‘s She Bop. She Bop was a controversial song in its time. She Bop has a very empowered feminine perspective and sexual theme: which demonstrates that Jesika von Rabbit is asserting her autonomy over her own artistry and her sexuality. “Journey Mitchell” dances around a set of steamy topics with hot mojave disco beats and embraces the music with shamanic abandon.

Jesika played nearly all the instruments on “Journey Mitchell”. That’s quit an accomplishment! She produced it with Todd Rutherford at The Rabbit Ranch in Joshua Tree. There was a guest appearance on Metanoia by the late and legendary Kim Fowley. For your vinyl junkies there will be a vinyl release in June on Dionysus Records with a special electro – lounge version of  The Dickies‘ You Drive Me Ape (You Big Gorilla). There will be 2 album release parties to introduce “Journey Mitchell” to all of us adoring fans. One will be this Saturday at Bar Sinister (Saturday, March 21, 11 PM) and the other will be at Bar Palm Springs in Palm Springs (Saturday, March 28, 11 PM).

Billy Bennight is a writer, photographer and wardrobe stylist with expertise and years of experience in these disciplines. His musical youth started as a Punk Rocker and has expanded into exploring many genres of music, with an keen interest in art, fashion, photography and writing. He shoots celebrity events and red carpets for The Photo Access and ZUMA Press. He is a member of the Los Angeles Art Association. His images have been published in The Los Angeles Times, People Magazine, Wall Street Journal and Vanity Fair. He's very engaged in life. You can follow him on his Facebook page at: www.facebook.com/billybennightartist and on Instagram and Twitter @billybennight
View all posts by Billy Bennight →
This entry was posted in Events, Miscellanious, Music, News & Sports and tagged Acid, Album Release Party, Billy Bennight, concert, Cyndi Lauper, dance, Dance Music, Disco, Dubstep, EDM, Events, Gram Rabbit, indie rock, Joshua Tree, LSD, Mojave, Mojave Desert, Music, music review, New Release, Psyche, psychedelic, Review, She Bop, Songs, Tripy, Weird. Bookmark the permalink.