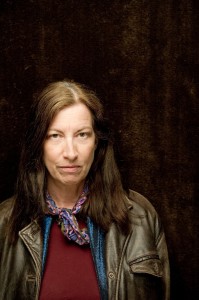 There is probably no artist I have found out the next morning had done a show that I would have made but missed the night before more often than the talented, the wonderful and the of late east coast domiciled, and so unavailable to fans in LA, Syd Straw.

Don’t let that happen to you – or to anyone you truly love. There are tickets still available for Syd’s show tonight at 8:00 PM and if you have never seen a show at McCabe’s, one of the most historic and fan friendly venues in Los Angeles, you might not know that the seating is first come, first served. That means if you head over there now (as in 3101 Santa Monica Blvd), or even in a little bit, chances are excellent you will still get the seat(s) you want.

A musician, a composer, a vocalist extraordinaire and a raconteur’s raconteur – what you come away with after spending a show with Syd is a sense of not only having been entertained, but also having been seen and heard your own damned self. There will be music, there will be humor. There will be magical and metaphysical surprises pulled right out of the ether of the moment.

With a career that includes work with Dave Alvin, Michael Stipe, Wilco, Rickie Lee Jones, Van Dyke Parks, Anton Fier, Matthew Sweet, Richard Thompson, Pat Benatar and Brian Setzer you never know what songs will be in her repertoire (or who will be joining her on stage) any given evening. But more importantly, unless you are a fan already, what you also might not know is just how well her own songs stand (or is that shoulder, burn and tug at your soul?) next to the works of some of the finest writers on the planet.

If you don’t already have tickets I will go on record as challenging anyone who reads this piece and heads over this evening that this will be the best last minute entertainment decision you will make all year.

This entry was posted in Miscellanious and tagged McCabes, Saturday April 11, Syd Straw. Bookmark the permalink.