Brent’s Deli: If Your Mom Could Actually Cook 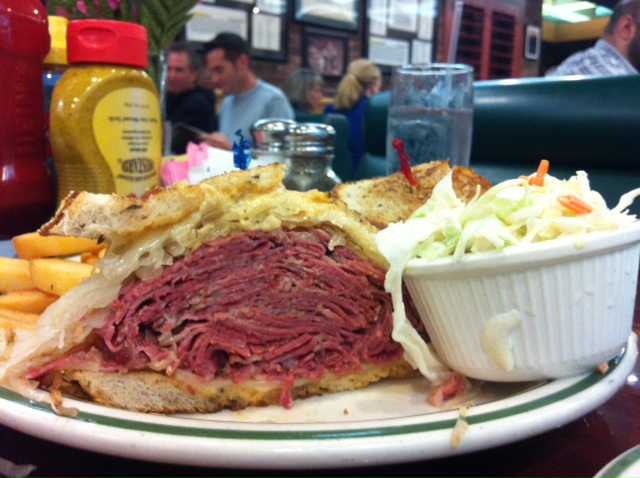 Truly, any restaurant can and should be judged on whether a dish could be made just as well at home. When we recently popped into San Fernando Valley’s stalwart Jewish deli, Brent’s, during a local fundraiser, we were prepared to be underwhelmed. Especially as visits to other delis that are generally heaped with unwarranted praise (Canter’s *cough cough*) have left us underwhelmed and queasy.

Because the joint is always jumping, there was a slight wait, but it gave us an opportunity to enjoy the scent of freshly prepared rye bread and ogle the dessert case (an éclaire the size of one’s head gave pause). We also perused the list of various local charities selected by Brent’s customers that would receive part of 20% of the entire day’s receipts.

Once seated, a plate of the most perfect freshly baked rye bread was provided, perfectly tangy and crisp coleslaw, as well as house dill pickles with a delightful snap, to fortify us as we perused the seriously extensive menu. We’re going back if only for that bread: perfectly crusted, thinly sliced pieces of dough touched by angels.

Being only a tad peckish, we were kind of overwhelmed by the menu offerings. I mean Chopped Liver and Egg Salad sandwich? We were tempted, but went with the old deli standby by which this writer judges all delis, including the one where she once learned to make said sandwich. Well, let it be known far and wide (or as wide as this blog reaches) that the Reuben sandwich at Brent’s is the epitome of and shall be known as the standard by which all Reubens shall henceforth be judged against. With the aforementioned bread lightly toasted, gooey melted swiss, and the most perfect pastrami: lean, with slightly crispy edges and just enough fat to keep it delightfully juicy.

More satiated than usual, we made slightly slow signs of exiting, only to be talked into dessert despite our best interests by the lovely server, Joanne. While we absolutely would not fall for the gargantuan éclaire, she convinced us that the cheesecake made on site “wasn’t too big,” and while we waffled over the type to order, suggested “why not both chocolate and strawberry. Being the suckers that we (me, really) are, we were sold. While ridiculously delicious, it was a three day affair once the leftovers were packed. Rich and creamy, with a clever combination. 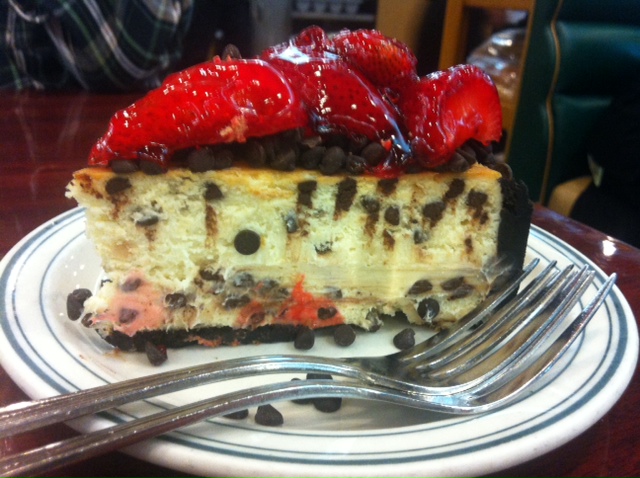 We’ll definitely be back for more, as we now can see why so many, and such a wide variety of, regulars always fill the restaurant. Also, in the deli’s inaugural Community Appreciation Day, we can see how $9,500 was handily raised for local charities handpicked by customers at both the Northridge location, and the Westlake Village location.

Food and drink were comped

Aileen moved to Los Angeles in 1988, when the Dodgers last won the World Series, and fundraising was in full effect after some jerk burned the L.A. Public Library down. Much like that year, her life in L.A. has had its ups and downs. After several years of living in the city, mostly in the Silverlake area, she moved to the San Fernando Valley in 2013, where she embraces the roominess and splendid mix of cultures, while exploring options overlooked while living "over the hill." She has very rarely met a burrito she didn't like.
View all posts by Aileen Fraser →
This entry was posted in Food and tagged Brent's, Cheesecake, deli, Good Eats, pastrami, San Fernando Valley. Bookmark the permalink.