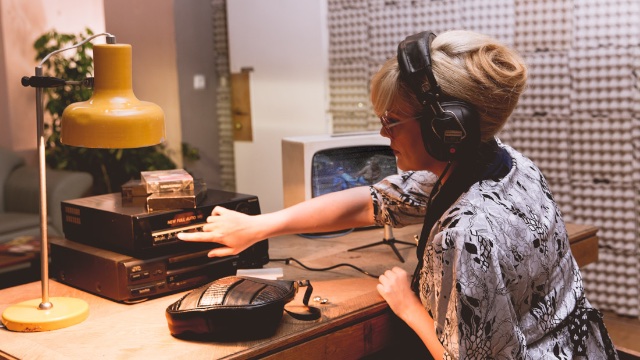 “Chuck Norris vs Communism” is the case of an irresistible title meeting a compelling story. This documentary explores the influence of Western movies had on Romanian cultural underground during the communist reign of Nicolae Ceaușescu that helped precipitate the downfall of communism Romania. Irina Nistor’s translator on the National Television’s Censorship Committee became the voice of freedom to Romania as her “Colonel” Zamfir collaborated on 3,000 smuggled films distributed in Bucharest that eventually spread throughout Romania. The intrigue and tension of the story circles around the tight rope of this clandestine operation during one of the most oppressive regimes of Communist Eastern Europe.

Nistor’s voice dubbed in over 3,000 movies, where she provided voices for both male and female roles in these American features, that include Dirty Dancing, Rambo and Last Tango in Paris. Nistor’s voice became synonymous with these American films. Nistor’s style of delivery, intonation and mannerisms over the original dialog became the mark of integrity in Romania. For those who attempted to crash this niche market with their overdubs of American movies it was perceived by most Romanians as frauds, imposters and poor imitators of her fine work. Romanians extracted details seen in these American movies, like fashion, quantity and quality of the food and lifestyle choices were elements of constant fascination among Romanian audiences. These movies offered the vanguard of western culture for Romanian audiences during the oppressive Ceaușescu regime. Peppered through the documentary’s story were reenactments of Zamfir and Nistor’s traitorous activities. This interlaced with the interview segments of real people, Nistor’s audience would then recount their impression in talking head style of the movies they had seen. They would recount stories of their careful gatherings of friends and families to watch these Western Imperialist movies with the impact that Nistor’s work had effected in their own lives.

The gist of the “Chuck Norris vs Communism” comes down to an shadowy entrepreneurial figure, Colonel Zamfir, who has secret police connections, who through a series of events in his smuggling operation, makes himself the richest man in Romania. He becomes an irresistible and formidable force that rivals the Communist party and Ceausescu’s power. Irina Nistor becomes a celebrated cultural hero who fearlessly interprets movies from the west. This dynamic duo balkanized this stodgy Communist regime and so deeply penetrates the Romanian culture, with their black market activities, that Nicolae Ceausescu’s own son comes to Colonel Zamfir for the hook-up for Western movies. The documentary is well paced and interesting anecdotal account of the power of how these movies influenced these people’s lives and a rare view on how something, we may consider trivial, can dramatically change people’s lives and alter their perception of reality. The very act of the Communist government withholding something like Western movies creates a breach in confidence within their rule with the general populace and a vacuum so powerful it undermines their own authority. “Chuck Norris vs Communism” is a warm presentation and an insider’s view of people resisting authority, fighting for their freedom and finding their liberty through western cinema.

Billy Bennight is a writer, photographer and wardrobe stylist with expertise and years of experience in these disciplines. His musical youth started as a Punk Rocker and has expanded into exploring many genres of music, with an keen interest in art, fashion, photography and writing. He shoots celebrity events and red carpets for The Photo Access and ZUMA Press. He is a member of the Los Angeles Art Association. His images have been published in The Los Angeles Times, People Magazine, Wall Street Journal and Vanity Fair. He's very engaged in life. You can follow him on his Facebook page at: www.facebook.com/billybennightartist and on Instagram and Twitter @billybennight
View all posts by Billy Bennight →
This entry was posted in Movies and tagged Billy Bennight, Bucharest, cheating, cinema, comics, Communist, Doc, documentary, Drawing, Feature, Film, Graphic Novel, illustration, Independent, indie, Indy, Intimacy, LAFF, Los Angeles Film Festival, love, Movie, Movie Review, Nicolae Ceausescu. Bookmark the permalink.