Interview: “A Night of Oneness” at the House of Blues Features Great Music for an Excellent Cause 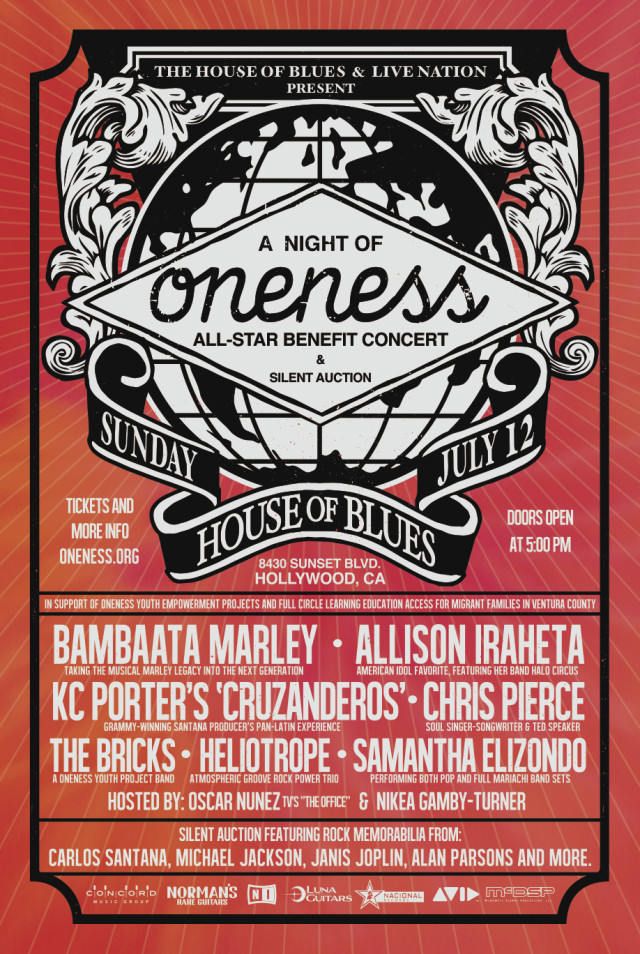 On July 12 at the House of Blues in Hollywood, several major artists will combine their talents for a concert to benefit ONENESS, an organization dedicated to education and oneness of humanity through mentoring in music and the arts. KC Porter and JB Eckl, co-founders of ONENESS, spoke about the event and the role ONENESS is playing in helping children throughout the world.

Q: What is the goal of ONENESS?

KC: The main goal is to combat racism. That means by educating people about it and coming to an understanding about it, especially among young people and that means using the arts and musicians. As musicians, we’ve had many precedents of socially conscious music making a difference in the past. So ONENESS is trying to get the musical community at large, whether established musicians, songwriters, artists or the up and coming artists who are l thinking about how their music can make a social difference, how it can make more of a social change as opposed to music that’s less relevant t o pop culture and things going on around them, but more specifically relating to race, because we feel that the world’s biggest problems have to do with separation and segregation and we are trying to use that through music and oneness because that is paramount to the world’s survival. There has to be community before there can be peace, so we are starting there.

Q: So that is what you mean by “Oneness of Humanity”?

JB: The principle of “Oneness of Humanity” has been put forward by every great thinker in history, every religion and every great philosophy, but we stubbornly try to separate ourselves by economic status or national identity or racial identity, whatever the thing is. I think the difference between any other point in history and right now is that we are forced to deal with each other now 24/7 because of technology, access and also sharing the impact of anything that happens. We have a world economy now and we have a world——a natural environment that, if something happens in one area, we feel the effects far away. So we’re dealing with things on a much bigger scale. Even though the concept of the oneness of mankind, we’ll hear about it throughout history, but right now it’s imperative that we get it, because we feel the effects of everything that happens worldwide. So if you hear about something happening in Baltimore, or Ferguson, or whatever the case may be, that has a direct bearing on what happens in your own neighborhood.

JB: We wanted to bring together a diverse group of artists that could speak to the message of oneness and serve as a ‘coming out’ party for us because of the recent events all around the U.S. in regards to race. That inspired us to reinvigorate ONENESS after a few years when our focus was elsewhere. We realized we have to redouble our efforts with this, so it was important for us to have an array of talent, so from our host to our performers it’s going to be the kind of thing you don’t normally see. We’ve got all kinds of music, we’ve got a wide diversity of ages, backgrounds, nationalities—– and it came together very quickly. We’re just really really fortunate and I think the ‘cherry on top’ of this whole thing is the involvement of Bambaata Marley, who is the grandson of Bob Marley and the son of Ziggy Marley. He’s continuing that Marley legacy and bringing it to a whole new generation; and he’s very gifted and his music is great so he’s newer on the scene but he’s bringing all that music and energy with him. The other one that we’re really excited about and making sure we could get was Allison Iraheta who is an old friend of KC’s. KC mentored her in her early days before shew blew up on American Idol and became a household word, but now she has a band called Halo Circus that has a really passionate rock sound that they have been developing for a while, so those two artists are the headliners and it is really fortunate that we’ve got them because it’s touring season now and most of them are out on the road, so we were really lucky that we got those two.

Q: What special treats do you have for everyone in the auction items?

JB: There are three categories of auction items that we have. One, is a bunch of articles that are signed by iconic artists. They have been signed by people like Michael Jackson and Carlos Santana. The second category is from the music companies, equipment companies who gave us stuff for the auction.
The third category I’m really excited about is some artwork that has come form mural artists in Baltimore, in the same neighborhood that had the biggest reaction to the death of Freddie Gray. That community has been in a lot of pain and a friend of ours by the name of JC Saulk has been mentoring these young guys and helping them get through this whole experience. In the process, he’s met a rather incredible community of artists. When we got to know JC, he said it would be something really special for us to have some of their artwork for people out here.

One of the other cool things at the auction is that during the evening, we’ll educate people about what’s going on in that neighborhood. That way, they’ll understand the value and the context of that artwork. What’s really important also that JC is really trying to help these kids into roles of leadership and roles that are related to the arts. He’s really incredible! There’s a lot of stuff they have to deal with, because it’s a tough area to be in, it’s a real challenge.

We also have a limited edition lithograph signed by Janis Joplin as well. Also, there are items from Incubus and Kolbie Calliat. Stuff that’s really, really special stuff!

Q: So can you put “oneness” into a simple way of looking at things?

JB: I think the reason why the word ‘oneness’ is what we’re trying to put out there is because it is a bit lofty to talk about unity, love and peace and oneness, all that stuff, unless you actually think of it as all being related to the people. One of our mottos is “All of us are blood”, which is a very direct way of saying that you would look at every issue differently if you were able to visualize the people involved as being your own family. What if that was your daughter, or your mom or your dad, or your brother or your sister. That’s the only way you can get your head around an issue and have enough compassion to deal with it from the heart. If you can’t make that leap of seeing people as being a part of literally the human family then it’s easy to belittle other people’s lives and they become disposable. “Oneness” is a way of seeing people as family and it’s a very painful way to see the world. You start to see the world as being through the eyes of your relations.

A Night of Oneness

The House of Blues, Hollywood

Ed is a native of Los Angeles who loves food and food cultures. Whether he's looking for the best ceviche in Colombia, the best poke in Hawaii, the best tequila in Jalisco or the best Taiwanese Beef Roll in Los Angeles, it's all good food! He also loves a good drink. He's had Mai Tais in Hawaii, Bourbon in Kentucky, Tequila in Mexico and Rum in Jamaica. His wine escapades have taken him to Napa, Sonoma, the Willamette Valley and the Santa Ynez Valley. And he's had beer all over the world! Music is another of Ed's passion, writing and interviewing many classic rock, rock and blues musicians. Getting the great stories of road experiences from them is a particular delight. Traveling also fits in with Ed's writing, exploring all over to find the most interesting places to visit, even in out of the way areas.
View all posts by Ed Simon →
This entry was posted in Events, Interviews, Upcoming Events and tagged A Night of Oneness, arts, benefit, Charity, Ed Simon, JB Eckl, KC Porter, mentor, Music, non-profit, Oneness, racism. Bookmark the permalink.

One Response to Interview: “A Night of Oneness” at the House of Blues Features Great Music for an Excellent Cause