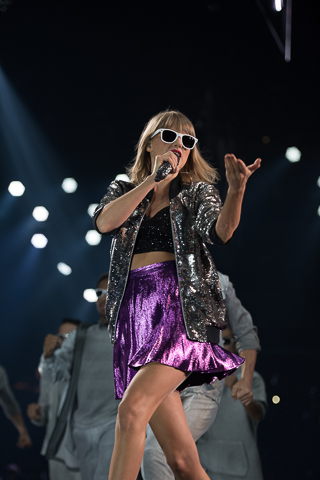 Last night I had a front-row seat to the spectacle that is a Taylor Swift takeover of The Staples Center.  Trying to do a review of something on this scale can be daunting, even more so since it wasn’t the first night of a multi-night show.  It would also appear that a lot of what I had intended to write seems as though it’s been written, pretty much verbatim already.  I’m pretty sure my mind (and my notes) aren’t being read by anyone, so I’ll put it down to something that isn’t that spontaneous. Not that there’s anything wrong with that though. A lot of people, many of them pretty young showed up last night for something special, and that takes a lot to deliver on.  A lot of rehearsal, choreography, lighting, sound, and all the other elements that go into this kind of spectacle. This is less a Taylor Swift concert, and more of an interactive experience. The only thing that’s missing is virtual reality, allowing Swift to reach out and touch each member of her audience, something she gets pretty close to in person.

The evening started off with Vance Joy, the first of two “opening” acts. I was actually surprised that there weren’t more people in their seats for Joy, given that he signed a five-album deal with Atlantic Records back in 2013. Five albums?  That’s a pretty big deal, in any era.  His set, basically an acoustic-based outing went over well enough, over top of the screams of the younger crowd which seemed to be screaming to just kind of warm up. Everywhere you looked, there were people dressed in lighted clothing, holding lighted signs, or just kind of lit. Were they selling batteries at the merch stands? I’d like that concession.

After the Vance Joy set, an interlude where it seemed that the empty seats filled in one shot.  Maybe they came to see and hear Haim?  I don’t want to shock anyone here, but I’m not familiar with Haim, and apparently they live right in my neighborhood.  In an instant, a gaggle of young women takes the stage and it’s pop-city, or at least I think it is.  One of the performers, decked out in a pair of tiny cutoff denim shorts, dances around a pod of electronic drums with a drumstick.  Lots of pop moves, kind of reminiscent of Sheila E in the 1980s.  And then, all of a sudden a rock concert breaks out right in front of me. I don’t mean a pop-concert with dance moves and predictability, a full-on rocker with guitar shredding, bass-thumping, long hair, moxie, and guitar poses worthy of the Sunset Strip. Not only was I not aware that a group of girls that young even cared that much about rock, I was floored that they played it so well, and looked authentic doing so.  Hey ladies, I hear Guns and Roses are looking for a good opening act….

Another interlude after Haim where you could feel the hard-core tensing in anticipation of the main act. And then Taylor Swift takes to the stage in a giant explosion of multi-media.  Like I said, trying to review this is daunting.  There is an element of it that is somewhat predictable, especially if you read reviews.  And Staples is already sold-out for the entire run, so that’s of no consequence.  I remarked to no one in particular that in many ways her show is similar to a Rolling Stones concert.  Both have huge ramps, song after song met by huge rousing cheers, a ramp for the singer to run up and down on, special guests, etc.  But the similarities end there.  One thing that struck me last night was something I have never seen in all my years attending concerts; the areas where the concessions are were empty. And I don’t mean there were no lineups, there wasn’t a single person to be found.  Empty bathrooms too.  Either they are putting glue in the seats along with those wristbands that light up that are given to each single attendee, or Taylor Swift has the rapt attention of every single person in the building.  You could have heard a pin drop in the concession areas, while you would not have noticed a bomb go off inside.

This is my first Taylor Swift show and I’m not sure what to expect outside of the musicality.  Everyone knows the level of talent and the amount of effort that goes into this. It was the interaction with the audience that I found refreshing.  I guess you have to keep in mind how many young, impressionable minds are in the building, but I’m also pretty sure nobody goes to those lengths to try and touch their audience.  At one point while perched atop her levitating ramp that allowed her to run the length of the floor section, Swift remarked that from her vantage point she could see “every single one” of her fans, and that “when we have a moment of joy or pain in our lives, we turn to music, and that’s why we are here tonight”. She stated that she was genuinely touched that every person in the building “chose my music” to make that connection.  There was also a lot of self-affirmation going on in the show.  It was one giant love-fest. Okay, it’s nice to see a really positive message being given out, and why not? Every generation has it’s messiah.

I’ll spare the rest of the details because it really is hard to find fault in something like a Taylor Swift show. Its all very well produced and the audience gets every single dollar’s worth. 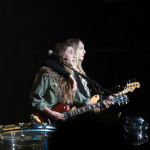 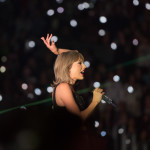 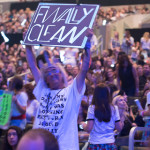 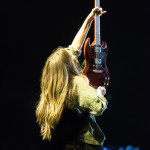 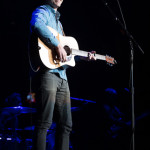 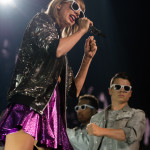 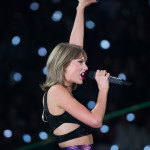 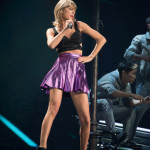 Ivor Levene likes to interview musicians, write about music and musicians, play music, listen to music, read about music, photograph musicians, and anything else you can think of with music. He has been involved with the music scene for over thirty years and his posts have appeared all over the place! Ivor says "I'm going to write about music as long as I have something to say".
View all posts by Ivor Levene →
This entry was posted in Miscellanious and tagged #haim, #taylorswift. Bookmark the permalink.