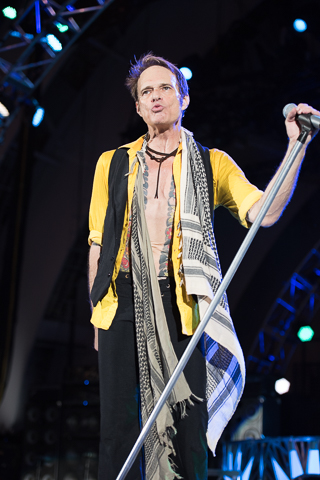 I’m not supposed to be here tonight, I’m supposed to be at the Lisa Fischer show over at the opposite end of the city, but as fate would have it, I’m at The Bowl instead, making that long climb up to the press gate. If you like long hikes up steep hills, become a photographer and go to the bowl. Not that I’m complaining mind you, I still love this place. The intimacy, the history, the architecture, and the sound of a well-amped band roiling through the seats and up the hills.

So back to fate. Without fanfare, an email from the Van Halen people pops up telling me I’ve been granted “photo only” status for the show. I’m fine with that, because I don’t really want to see Van Halen (or so I think). I want to shoot the show more than I want to hear it. The last two times I was at a Van Halen show, I was not at all impressed. David Lee Roth mumbled his way through the few songs I stayed for, dressed in his “Spanish bullfighter-meets bellboy” outfit, Eddie wasn’t his usual brilliant self, Alex hid behind a massive kit, and they replaced Mike Anthony with Wolfgang, something fans still seem unable to accept. Don’t get me wrong, I love Van Halen (on vinyl), I just came away from the last show I saw somewhat disappointed. Until tonight. Maybe not having to shoot from the sound board has something to do with it?  This is how you win back the field!!!

Normally at The Hollywood Bowl, you’re escorted in for three songs, and you’re situated so far back, you need a minimum 400mm lens, and you’d be well-advised to bring that monopod, you can open it up and use it as a cane in that trek up to the west gate. I figured tonight would be like any other show at The Hollywood Bowl, and decided to leave all my gear at home, travel light, and only bring the long lens, but just as I was about to leave, I grabbed an extra camera with a short lens, because you can never have enough gear, right? Plus, you want 20 lbs of gear on your back when you make that long hike up that hill….

So after battling 45 minutes of traffic over a 10-minute drive, I arrive and Kenny Wayne Shepherd is already playing. Because it is the Kenny Wayne Shepherd band, I sit in traffic freaking out because I am going to miss the start of their set.  I always profess to love “opening acts” but Kenny and his band aren’t an opener.  This is more like a double bill.  I’ve seen this act more than a few times and I don’t want to miss a note.  So I get to the bowl and try and hike up the hill as fast as possible, even trying to con an LAPD officer into transporting me up the hill in his “people mover for the disabled”.  Nice try, start walking.

Once at the gate, after checking in I’m elated to find that I have not missed my opportunity to shoot Kenny Wayne Shepherd, although sadly, I have missed a few songs.  After checking in, we line up. This part of the ritual at any show is similar to being in kindergarten and going outside for a fire drill. You’re led in, almost in a line, to the pit. They count you off as you pass the security people, and there you are. Except tonight, we make a sharp left right after the security gate. I wonder where we’re going, and then voilà! We are right up front in the pit. The pit? I didn’t even know they had one here. I remember a few weeks ago seeing a photo of Jimi Hendrix playing at the bowl, and in front of the stage is some sort of pool filled with water. Apparently the pit is where this pool used to be. All of the other photographers seem equally stoked to be shooting from this vantage point, so I know I’m not the only one. A fellow shooter tells me that “Diamond Dave wants the photographers up front”. Wow, that’s kind of cool. Who knew that the bands cared about photographers? Another shooter tells me “One of Dave’s kids is a photographer too”. OK, now it makes sense.

The Kenny Wayne Shepherd band is on fire, a perfect match for the headliners.  Very little flash, solid blues, incindiary guitars, solid rhythm section, just perfect.  One of my favorite bass players, Tony Franklin is present, playing his fretless Fender. After three songs, it’s time to all join hands and be led back out to the waiting area. They open the gate and we all stream out, single file to await the arrival of the Van Halen family band. At precisely 8:45 our handler arrives to lead us back to the pit. A few of us can’t believe our good fortune tonight, to be shooting from so close. Shooting at The Bowl from the pit is like shooting at a local bar. The stage is nice and low, so low you can put your camera on it before the band comes on.

With about as much fanfare as an unknown man walking into a room, Alex walks on to the stage and disappears behind his drum kit, and reappears a second later seated behind the drums. If it weren’t for the audience cheering, I wouldn’t have even noticed. And then out stroll Eddie and Wolfie. And now it’s time for fanfare. Can you imagine David Lee Roth walking into any room or stage without fanfare? Neither can I. He doesn’t really “walk onstage” as much as slides across it, to thunderous applause. He jumps up onto the drum riser and with cymbals in hand starts doing something that looks like a cross between interpretive dance and drum corp. I think we’ve noticed you Dave.

The band launches into “Light Up The Sky”, and it was AWESOME. They sounded great, I mean really tight. Dave had toned it down (for Dave) and it was like being at one of their shows back in 1978 (except without Mike Anthony). But hey, Wolfie has really become an accomplished bassist. This is the one show that after two songs, I wish I had more than just a photo pass and had a ticket to the show. Dave plays right to the audience. Dave hams it up. Dave focuses on a hot looking young woman in the front row and does what Dave does. He rubs the old crotch, gyrates a bit, and asks if someone can translate what he’s saying into Spanish for the hot young girl. She should have been around in the 70’s when there was the promise of Dave doing what he did back then with groupies. Now backstage at a Van Halen show I’m sure it’s all backrubs, icy-hot, and the drug of choice is probably Lipitor. Oh wait, that’s me! The band ripped through one hit after another, most of them from the first two albums. Even right up front, the sound was clean and crisp and rocked. At one point, Ed used this device he had patented that allows a guitarist to flip the instrument horizontally and play it like a pedal steel guitar. I wonder how many people picked up on that. Up close you can really see how a lot of his tricks work.

Into about the second song, I have to fight myself to keep from rocking out and ruining the photos, but it’s hard to not move, and be moved.  This is the Van Halen of my youth!  They are faithfully replicating the sound that they were famous for, and they thankfully haven’t resorted to nostalgia.  Ed is low key, Alex is low key, Wolfie is thumping it out, and even Dave is low(er) key.  Not too much though, because it wouldn’t be Van Halen without his showmanship.  All the bickering you’ve heard on the internet about the bass player?  Forget about it.  Not only is Wolfgang becoming a real badass bass player, he Eddie are doing a great job with the backing vocals, something that was a hallmark of Van Halen.  There is nothing missing here tonight, and I’m right in front of it.  With the hometown crowd.

I can’t review the entire show because after six songs you have to leave, but I leave thankful. I’m thankful not only for the great vantage point, but thankful that Van Halen has restored my original opinion of them.  It was quite the concert, they literally exploded onto the stage.  I’ve never wished I could stay at a venue so much.  You can catch the band again Sunday night! 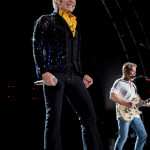 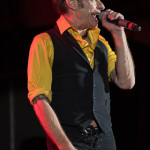 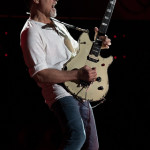 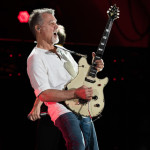 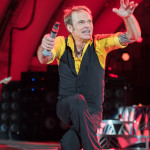 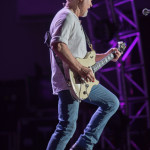 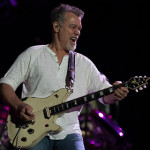 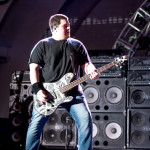 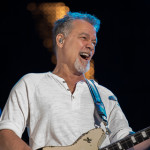 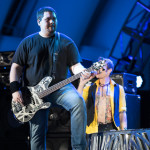 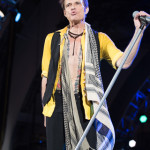 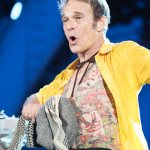 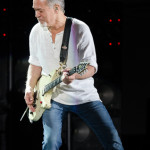 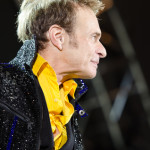 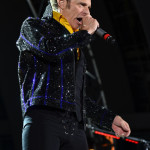 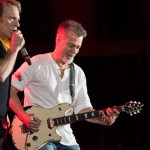 Ivor Levene likes to interview musicians, write about music and musicians, play music, listen to music, read about music, photograph musicians, and anything else you can think of with music. He has been involved with the music scene for over thirty years and his posts have appeared all over the place! Ivor says "I'm going to write about music as long as I have something to say".
View all posts by Ivor Levene →
This entry was posted in Events, Music, Upcoming Events. Bookmark the permalink.

One Response to Family Band – Van Halen Burns Down Hollywood