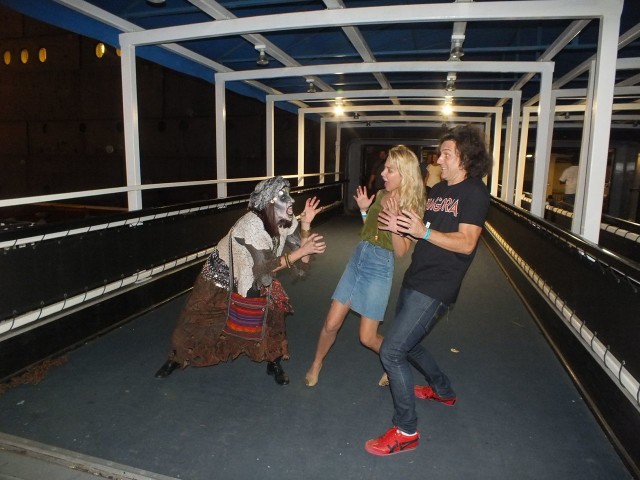 ALONE  [AN EXISTENTIAL HAUNTING] (Saturday 10/31 is sold out)

Alone is a 30 minute psychological journey into your nightmares that you must embark upon alone. Instead of blood and gore, Alone explores loneliness, fear and survival. Just you. Alone. In the dark. It is shrouded in mystery, but press sources report an underground labyrinth that is stinky, dark and dirty. It was created by a filmmaker and a CIA graduate so you know it’s going to be trippy. Location given after ticket purchase. 18+ must have valid ID. Cell phones, cameras or other recording devices will not be permitted inside the event. You will be wet and dirty and people will touch you. You must be in good physical condition. No flip-flops or high heels. There is a lounge for recovery. With beer. This year the theme is “Unweave the Rainbow” and is a study of the effects of light.

Halloween Pub Crawl – COME IN COSTUME! One all access ticket to 10+ bars and nightclubs on Hollywood Blvd. Party with hundreds of other costumed crawlers. No schedule – you and friends roam the streets at your own pace and party non-stop all night. Show your wristband for exclusive drink specials and free entry at Hollywood’s best Halloween parties!

This year’s theme is the Boogeyman. Five scare zones including a twist on The In-Between Dark Maze. No kids under 8 years old, no smoking, no refunds if you chicken out. Do not touch the wild animals or the actors. Don’t even touch the trees. You will get soaking wet. They rate it as a “high scare.”

DARK HARBOR AT THE QUEEN MARY

Six Mazes, including the Lullabye Maze, based on the legend of the Queen Mary’s resident ghost, Scary Mary. Monsters, and a Big Top Bar featuring absinthe, Starting at $24 Age 13+

Mazes include Gunslingers Grave” “Black Magic” and “Paranormal Inc.” If the Ghostrider rollercoaster doesn’t scare you, we bet the roaming monsters will.

“…a total mind fuck of a collection of sketches ranging anywhere from 15 seconds to a few minutes long.” – Dukey Flyswatter. Also check out Zombie Joe’s maze, which even made our fearless Dukey jump. Tickets are no longer available online. Reservations: (818) 202 – 4120. Cash/MC/Visa/Debit card accepted at door.

Take your seat on the bleachers and get comfy, because you are going to prom! “…this successful revival is firing on all cylinders and is being primed for Broadway. With an excellent cast and stage direction, this play is a must-see, whether during the Halloween season, or any other time of the year.” -Nikki Kreuzer

NOSFERATU: A Symphony in Terror

BAT BOY THE MUSICAL: RIPPED FROM THE HEADLINES

Possibly the most popular cover ever for tabloid Weekly World News tabloid, this musical comedy tells the story of a half-human/half-bat boy But soon the town’s cows begin to fall victim to a mysterious plague. “With its clever production numbers, infectious pop-rock score, surprising twists and a message about acceptance, this frightfully funny spoof is a classic love story with a wicked bite that’s part comic book, part horror flick — and all fun.” Plays through

An annual tradition for children and adults alike. First released in 1993, Tim Burton’s THE NIGHTMARE BEFORE CHRISTMAS was directed by Henry Selick (JAMES AND THE GIANT PEACH), and based on a story and characters by Tim Burton. The film follows the earnest-but-misguided adventures of Jack Skellington, Halloween Town’s beloved Pumpkin King, as he attempts to take over the Christmas holiday. Against the advice of Sally, a lonely rag doll who has feelings for him, Jack enlists three mischievous trick-or-treaters – Lock, Shock, and Barrel – to help him kidnap Santa Claus

This is the biggie. If you have never done West Hollywood for Halloween you owe it to yourself to go. The costumes are always original and hilarious. There will be live entertainment, the street is lined with restaurants and bars, and the action is in the street just like Mardi Gras. It is specifically an “adult” event, so children and pets are not recommended. This year’s theme is The Rocky Horror Picture Show. Secret tip: The police station is a good place to call a cab or Uber and they have a bathroom.

Check-in is from 6:30-9 p.m. at Rusty’s on the Pier. Free zombie makeup will be provided from Toni & Guy Hairdressing Academy for those who need it. All zombies are requested to please behave like zombies, short of eating brains. Zombies can enjoy spooky drink and food specials all night at participating locations with the official pub crawl wristband.  The wristband also includes access to the Official Zombie After Party at Wokcano.

This crawl encompasses the Library Bar, Sixth Street Tavern, Beelman’s Pub, Spring St. Bar, and King Eddy Saloon. ACME hospitality group is presenting its second annual Crawloween. Each bar will throw a party with a different theme. The Library Bar will follow a Dead Celebrities theme while Sixth Street Tavern is holding a Sock Hop. Beelman’s Pub will celebrate Glam Rock. Each bar will offer a signature spiked punch for $5, and judge a costume contest around 9pm. All locations are within a few square downtown blocks of each other.

If this is not Danny Elfman’s most critically acclaimed work, it is definitely the most fun and accessible. Just try not to sing along. Pack an extra ice chest with cool drinks and snacks to leave in the car for the traffic on the way out.

La Noche de Los Muertos – an evening of mystery and intrigue as El Cid is transformed into a haunted Spanish mansion. There will be live gypsy music by The 440’s, Apollinaire, and The Miscreants, flamenco dancers, fortune tellers, a photo booth, and deliciously creepy treats from Chef Juvenal. 21+

Born and raised in the great city of Los Angeles, this food, culture and music-loving punk rock angeleno wants to turn you on to all that is funky, delicious and weird in the city. While Elise holds down the fort, her adventurous alter ego Kiki Maraschino is known to roam the country in search of catfish.
View all posts by Elise Thompson →
This entry was posted in Attractions, Cocktails, Beer, Wine & Weed, Events, Food, Movies, Theater, Upcoming Events. Bookmark the permalink.

One Response to Halloween Events in LA 2015